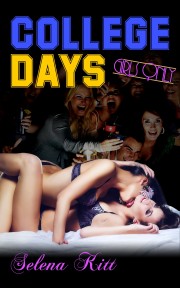 Selena Kitt's *Girls Only'where the girls get naughty together, but it feels oh, so good! Wild and crazy college roommates Whitney and Meg end up at a local fraternity party where Meg, furious at her boyfriend for cheating on her, is looking to even the score. Whitney has no problem backing up her friend in her time of need, so when a drinking game gets out of hand, the two girls put on a show that will go down in fraternity history. Who knew? Turns out revenge is a dish best served up blazing hot!

Share what you thought about College Days and earn reward points.