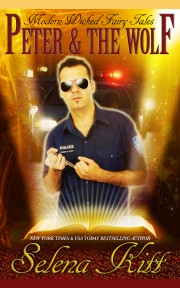 Peter and the Wolf A Modern Wicked Fairy Tale

In this modern version of the fairy tale classic, Peter and the Wolf, Pete Hunter is a cop determined to punish the men who killed his father. But the Russian mob is a fierce adversary, and their roots in the community run deep. Even Pete's long-time partner, Konstantin, who left the Demitrovic Bratva years ago to join the force, can't seem to shake their hold on him. When the mob orders a hit on Konstantin, Pete not only has to protect his partner from the Russian mafia's best hitman, The Wolf, he also finds himself falling for the woman they used as baitâ€”Konstantin's beautiful, young niece, Natalia. Pete and Natalia quickly discover they have far more in common than they realizedâ€”including the fact that they're falling head over heels for each other. But there isn't much time because The Wolf is at the door, and Pete Hunter may be the only one who can save them all.

Share what you thought about Peter and the Wolf and earn reward points.