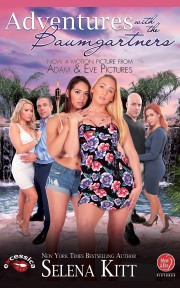 The broad-minded Baumgartners are ready to open their arms--and their marriage--once again. While Ronnie, their former flirtatious babysitter, is exploring her newfound naughty nature with her lover, Gretchen, Doc and Mrs. B have their sights set on old friends, Daphne and Ari Wilson. Things really heat up when Ronnie and Gretchen take on an adventurous new roommate--and her boyfriend, too. Everyone seems to be having a rousing good time--until romance sparks between Ronnie and her handsome personal trainer, Vince, and she needs to decide--does she really share all that well with others?

Share what you thought about Adventures with the Baumgartners and earn reward points.