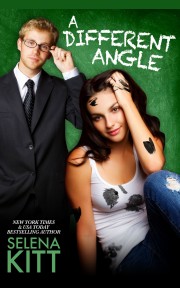 Tomboy mechanic Cat has fixed up a classic 1978 Chevy Nova in the school shop, but unless she passes her claasses to get into a prestigious college, her stepfather, Ted, won't let her drive it. Unfortunately, math is not Cat's subject, but while her stepfather hopes David, the older, British tutor he finds for her, will help her find a way to navigate geometry, Cat finds herself wishing he would teach her something much more interesting.

Share what you thought about A Different Angle and earn reward points.