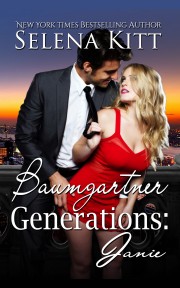 Janie Baumgartner has big dreams of trying to make it as a writer in New York, and between that and her job as a nanny, working for family friends Ronnie and TJ, her life is incredibly full. That's when she meets him. In spite of the compromising situation, Josh, who just happens to be an agent, sees great potential in her--and not just as an author. Josh finds Janie utterly irresistible and he's the kind of man who aggressively pursues what he wants. But--plot twist--Janie is already in a complicated, polyamorous relationship with her benefactors. What happens when she finally reveals this to Josh? Will she lose him? Will she be forced to make an impossible choice? Or will she find that the capacity for the human heart to love is, indeed, endless?

Share what you thought about Baumgartner Generations: Janie and earn reward points.