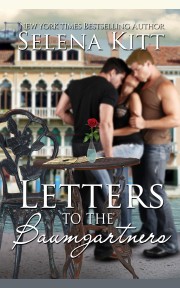 Danielle Stuart is spending a year abroad studying in Venice, but while she loves the romance of the language and the beauty of country, she finds herself more and more confused by her growing feelings for a gondolier named Nico and her now ex-husband, Mason, who has shown up on her doorstep looking to reconcile. Desperate Dani writes to the Baumgartners in hopes her former lovers might help her clarify her muddled emotions. Finding herself torn between the two men, she reveals her dizzying dilemma, only to discover, thanks to the BaumgartnerÃƒÆ’Ã‚Â¢ÃƒÂ¢Ã¢â‚¬Å¡Ã‚Â¬ÃƒÂ¢Ã¢â‚¬Å¾Ã‚Â¢s insight and her own sense of sexual discovery, that she may not have to choose after all.

Share what you thought about Letters to the Baumgartners and earn reward points.