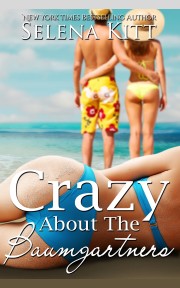 Doc and Mrs. B have hired a new au pair and sheÃ¢â‚¬â„¢s crazy about the Baumgartners. Poor rejected Gretchen, fired from her previous job and still licking her wounds from a recent breakup, is desperately seeking the kind of attention and affection only the Baumgartners can offer. So why do they seem to thwart her advances at every turn? It isnÃ¢â‚¬â„¢t as if the polyamorous couple has been secretive about their fondness for threesomes. Naughty Gretchen makes up her mind, on their annual trip to the steamy sun and fun of Key West, to show the Baumgartners just how crazy she is about the both of them.

Share what you thought about Crazy About the Baumgartners and earn reward points.