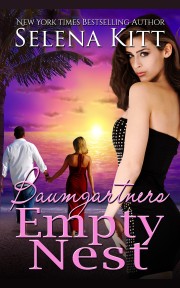 For the first time in years, Carrie Baumgartner doesn't have any chicks in the nest--all the fledglings have flown the coop and she's finally got her sexy, energetic husband all to herself! Doc suggests they take advantage of this newfound freedom, and his adventurous wife has no objections. She intends to enjoy their little nest, preferably in every room, in every position they can possibly imagine. But an empty house has its echoes, and while Doc buys a new muscle car and considers retiring from his practice to mark his mid-life crisis, his wife experiences a much deeper quandry. Carrie has been in communication with someone from her past, and their relationship has blossomed into something no one expected. Things with Jody are so intense, it scares her a little, and even her usually open-minded husband has his reservations. When Carrie and Doc go on a hot, fun-in-the-sun vacation to their Florida Keys timeshare, couple time is interrupted by a very sexy, but distraught third. Jody's in trouble and has nowhere else to turn. Of course, the Baumgartners offer their assistance--and even their bed. But this is the kind of threesome the polyamorous couple could never have imagined, even in their wildest fantasies, and it's about to turn everything upside down. If you thought the Baumgartners were uninhibited before, you're about to see what it's like when they really let their freak-flag fly. Join them down where it's hot, moist and humid--and where the surprises sometimes come faster than they do!

Share what you thought about Baumgartners Empty Nest and earn reward points.