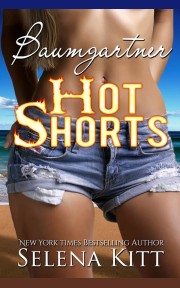 Get four of the Baumgartner Shorts in one volume! Meet the Baumgartners, A Baumgartner Christmas, The Baumgartner Dirty Show, and A Baumgartner Valentine. MEET THE BAUMGARTNERS: Steve Baumgartner--alone, naked, face flushed with pleasure. Carrie spies him indulging in a sexy, private moment. Though she's sworn to herself she's through with guys, and her roommate-turned-lover Maureen is more than enough to satisfy her, Carrie can't stop fantasizing about Doc. Then Carrie gets her chance. A summer getaway to Key West, the threat of Maureen's zealot boyfriend, and Doc's hunger for pleasure prove to be the perfect cocktail to lower Carrie's inhibitions. Smell the ocean air, pour yourself a drink, prepare for a summer to remember. It's time to Meet the Baumgartners! A BAUMGARTNER CHRISTMAS: In spite of a brief experimentation early in their relationship, Doc and Carrie Baumgartner have since maintained a monogamous marriage without too much difficulty or even temptation--until now. A move far from home, coupled with new friends and long hours away from each other, have left the young Baumgartner couple on shaky ground. Doc believes bringing in someone "new," like they did early in their relationship, might add just the spice their marriage needs, but Carrie isn't so sure about that plan. Doc has a surprise Christmas present for his wife anyway--but in an ironic twist, he discovers she has one for him, too. Each gift allows the Baumgartners to rediscover, in the true spirit of Christmas, an expansive love that includes not only their feelings for one another, but the ability to share their passion. THE BAUMGARTNER DIRTY SHOW: Janie and Josh have been married ten years, and while life is good, they both have a longing for something "more" on occasion. The two think they've found a good compromise between honoring their desires and still maintaining their loving commitment. Once a year, on their anniversary, they embark on something so sexually adventurous, it gives a whole new meaning to the word "monogamy!" A BAUMGARTNER VALENTINE: Henry and Libby have a Valentine's Day tradition. Every year, this young, college aged couple share and explore a special fantasy with one another. This time, though, Libby has discovered something shocking about the Baumgartners, leading her to speculate wildly about Henry's real feelings. What she uncovers will lead them both to explore their wildest dreams and their true heart's desires!

Share what you thought about Baumgartner Hot Shorts and earn reward points.