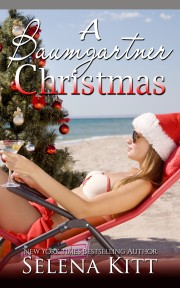 In spite of a brief experimentation early in their relationship, Doc and Carrie Baumgartner have since maintained a monogamous marriage without too much difficulty or even temptation--until now. A move far from home, coupled with new friends and long hours away from each other, have left the young Baumgartner couple on shaky ground. Doc believes bringing in someone &amp;quot;new,&amp;quot; like they did early in their relationship, might add just the spice their marriage needs, but Carrie isn't so sure about that plan. Doc has a surprise Christmas present for his wife anyway--but in an ironic twist, he discovers she has one for him, too. Each gift allows the Baumgartners to rediscover, in the true spirit of Christmas, an expansive love that includes not only their feelings for one another, but the ability to share their passion.

Share what you thought about A Baumgartner Christmas and earn reward points.