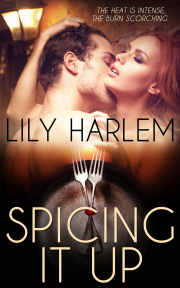 Heat from a spanking ensures that Cassandra simmers with pleasure in a way she never would have imagined.

Cassandra lives by a set of rules that both thrill and complete her. Having Master Raif attend her every need in and out of the bedroom is perfection. She trusts him absolutely, and he wields his power over her with a great sense of responsibility.

There is only one thing for it, and that’s to smile through the evening and let the anticipation build. When it finally happens and she gets what’s coming to her, Cassandra knows she’ll never look at spice the same way again. The heat is intense, the burn scorching, and her Master takes her to new highs that make her sizzle with satisfaction.

Publisher's Note: This book was previously released as part of the Over the Knee anthology by Totally Bound Publishing.

Cassandra stood naked in the kitchen. There was nothing unusual about her state of undress. It was how she had to be when in the house with Sir. He loved her body—seeing her body, touching her body, using her body—and he wanted her available at all times.

She liked that—it made her feel adored to know how desired she was. But what she didn’t like so much was frying onions ready for the dinner party with her flesh so near to the pan.

“Thank you.” She rested the metal spatula down and stepped away. “Sir.”

“You have to be careful.” He frowned at her then wiped his hand over his cheek. He deposited a small streak of butter there—he’d been making dessert. “I don’t want you getting hurt.”

She smiled and wiped it away with her thumb. “You’re a messy cook, Sir.”

“It usually tastes okay, though.” He grinned.

“It’s always delicious.” She pressed her lips to his. He had a dusting of stubble—he hadn’t shaved as it was the weekend—and she loved the feel of the sharp little hairs on her chin.

“One quick job before you get dressed,” he said, patting her ass in a playful tap and breaking their lingering kiss.

She didn’t flinch, barely even noticed the smack. She’d had her ass beaten much harder than that—quite regularly, thank you very much—and she thoroughly enjoyed it.

“Oh, what job is that?” Cassandra glanced around the kitchen. The starters were laid out ready, the steaks for the main course would be fried then topped with the onions when their visitors arrived and dessert was now in the oven, baking slowly.

The crease in his brow relaxed. “Go to the bottom drawer of the fridge.”

She did as he’d instructed and made sure to bend double with her rear up and her legs parted. She wanted him to catch a glimpse of her pouty lower lips and her most private hole.

As she reached into the vegetable compartment, the spoon stopped scraping against the frying pan.

“What am I getting?” she asked, twitching her hips from side to side.

“The ginger. There’s a fresh root in there.”

Cassandra spotted it still wrapped in a thin, clear supermarket bag. She clutched it and stood, shut the fridge door then turned.

She’d been right. He was staring at her, though he was absently stirring the onions again now, the spoon once more making a grating noise.

“You little minx,” he said, shifting from one foot to the other.

“Sir?” she said, a question in her voice.

“And with no time for me to do anything about it.”

She glanced at his groin. Sure enough, the outline of his cock was visible through his jeans. But then again, that was quite a normal condition for him to be in. He seemed to be permanently aroused these days. Living as Dom and sub full-time, and not just in the bedroom, certainly seemed to be agreeing with him.

Another HOT read by Lily Harlem. She never lets down with her stories. Even though the story was short and we didn't get a ton of background on the characters, I still felt connected to their relat...

Cassandra is preparing for a dinner party when Sir surprises her with a new ingredient. This ingredient isn't for culinary use though. This story had me googling and goggling!

Share what you thought about Spicing it Up and earn reward points.