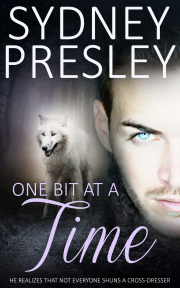 One Bit at a Time

Being thought of as a freak wasn’t something Raven cherished.

Raven has been brought up as a shifter in the city, along with his siblings, hiding what he is from humans. His father became abusive as soon as Raven’s mother died, and after a traumatic childhood, plus being caught wearing his sister’s clothes, Raven knows it’s time to run away.

He takes off in search of a wolf haven, knowing they’ll take him in but worrying over how his siblings will fare now he’s not there. He meets Boss, the owner of the compound, and realizes that not everyone shuns a cross-dresser. What follows is a new journey of discovery—not only can Raven wear what he wants, but he can be exactly who he is, too.

The problem is, his past won’t let him go, and someone is on a mission to drag Raven back home to his father. And that someone doesn’t seem to want to take no for an answer…

Being thought of as a freak wasn’t something Raven cherished. He wore women’s clothes—and what of it? Doing so was totally natural to him and had been since the first time he’d tried on a pair of his sister’s shorts. He’d kept it a secret for years and was still the person he’d always been whether he wore her things or not. Did the people who had called themselves his family for twenty-five years think his choice of clothing changed him? Changed who he was inside?

They must do, otherwise I wouldn’t be roaming through the fucking forest by myself.

Bitter. Yeah, he was bitter—and who wouldn’t be? He needed to get to the wolf compound he’d been told about, the one where they took in strays and let them be whoever the hell they wanted to be. Problem was, he had about another ten miles to go and didn’t think he’d make it before they locked the place up for the night.

Shit, his legs were sore, all four of them. He’d traveled in wolf form, thinking he’d get to the compound without leaving a trail. Well, the human kind of trail anyway. No proof he’d boarded a bus, no CCTV cameras capturing him getting off one. But the wolf trail, his scent, they’d be able to follow that.

And it was funny, but his father would no doubt have reported Raven missing—just to keep up appearances and all that—and Raven didn’t fancy being hauled back home by the police to live with people who had turned on him as quickly as an irate rattle snake.

He was a blight on their lives, an embarrassment, so why try to get him back?

‘No child of mine will bring shame on the family…’

His dad had a few lines like that, ones he churned out if he thought his kids would make him look bad. Raven running away would be frowned upon. But was it really running away, seeing as he was twenty-five and old enough to do what he bloody well pleased?

He stopped, the forest surrounding him giving off a creepy vibe. Apparently, he had to get to the edge of it then continue along the motorway and the compound would be right there in the distance.

“Can’t miss it,” his brother had said. “Massive place. Mansion. And I’ll join you there soon, as quickly as I can.”

Raven appreciated that his brother, Glen, the only one to stick by him, was prepared to up sticks as well, just so Raven wasn’t alone. Glen, two years younger than Raven, risked being dragged back home too, but he’d said he’d fight their father and that he’d never felt as though he fitted in at home, right from when he’d been a little kid.

Weird how from the outside families seemed normal, but behind closed doors they were far from it. If the good people of their neighborhood knew what went on in the Beauchamp household, Raven’s dad wouldn’t be spoken to ever again. Mrs. Farrow next door—well, she’d report him quick as a flash if she knew he beat his four sons and daughter. As Raven had grown up in a detached house, Mrs. Farrow would never have heard Raven and his siblings crying out—and she wouldn’t have seen any bruising either. Raven’s dad forced his kids to shift after every beating so they’d heal and all traces of abuse were erased.

Fucking bastard. I should have left home as soon as I hit sixteen.

He asked himself why he’d stayed and came up with the same answer as usual.

Stayed for the others, didn’t I? But it’s okay now. They’re all adults. They can leave too. Charlene is twenty-four and the twins are eighteen. I’ll miss them all—especially the twins. Scott is such a funny kid, and Stephen is his serious sidekick.

An owl hooted, bringing on a shiver that rippled Raven’s fur. He was exhausted and needed a rest, but something inside told him he ought to keep going, at least until he reached the motorway. The darkness didn’t help, giving him the jitters, closing in on him, as scary as his dad’s fist arcing through the air toward him.

Stop thinking about that now. He’s gone. Out of my life—if he doesn’t track me as a wolf and find me.

This is not your typical shifter story. Raven is a different type of shifter. After being abused and persecuted by his non shifter father he seeks the haven. Fate has decided that Boss, his fated mate,&n...

This was an interesting short little story about a man who has an abusive father that is only further incensed by the fact that his son is a cross dressing gay man. Throughou...

Share what you thought about One Bit at a Time and earn reward points.

Just before One Bit at a Time was written, I'd noticed in the news and on social media that the world seemed to be forgetting that there are bigger things going on than the usual 'First World Problems'. Lots of complaints about everyday things had become big news-as though those everyday things were akin to bombs destroying lives or massive catastrophes and they had failed to be significant.