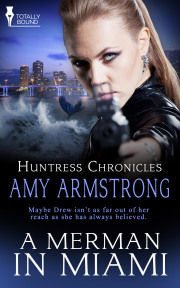 A Merman in Miami

Tired of loving someone who doesn’t love her back, Mia decides to walk away from her hunting partner of ten years, but is Drew really as out of reach as she believes?

Mia Harding has been hunting vampires since she was sixteen years old—almost as long as she’s been in love with her overzealous hunting partner Drew Caine. Unfortunately, the only thing Drew seems passionate about is his job. Tired of longing for someone she can’t have, Mia makes the heart-breaking decision to find a new partner and cut all ties to Drew. But before she can make the request to the council, Mia and Drew are sent to Miami to retrieve one of the lost grimoires. Mia is determined to make it their last mission together—but first they have to survive it.

Drawn to the dark magic of the book, vampires and warlocks begin congregating in the city adding extra pressure to an already difficult mission. When the marine biologist thought to be in possession of the book turns up dead, the trail leads to the highly secretive merpeople. Entering their underwater realm will be problematic, but getting back out will be nearly impossible, especially when the merman king decides he wants Mia as his queen. Lonely and unhappy, Mia at first warms to the advances and the magnetic allure of the king, but maybe Drew isn’t as far out of her reach as she has always believed.

When Drew pulled the stake free from the vampire’s chest, the creature let out an ear-piercing wail then fell to the ground in a heap. The chilling sound he made sent shivers slithering down my spine. There was nothing human about the sound—nothing that allowed me to draw comparisons between a living, breathing human being and the damned, undead existence of the vampire I was looking at—nothing that made me feel anything resembling pity for his demise.

We checked either end of the alleyway to ensure the creature’s screech hadn’t alerted unwelcome attention. Afterward, Drew sought out my gaze and grinned. Excitement flashed in dark blue eyes that appeared black in the moonless night. The sight of his pleasure did funny things to my stomach. Maybe it should have bothered me the way he derived such joy from killing vampires, but the truth was—I enjoyed the job every bit as much as he did. Though I suppose it wasn’t merely a job—it was a calling. Drew and I had both been born into a long line of vampire hunters and the need to kill the undead creatures and send them back to their maker was as natural to us as breathing.

Vampires were evil, soulless beings that preyed on those weaker than them. They thought nothing of spilling blood and taking lives. It made me proud that there were a lot fewer of them on Earth because of people like Drew and me—hunters who had been trained to kill them—all for the protection of humans who weren’t even aware of their existence.

Drew’s gaze flitted back to the creature and he watched the vampire’s body degrade, aging before his eyes. In just a few minutes more, nothing would remain but a large pile of ash. While Drew’s attention was on the vampire, I studied Drew. He wore his usual hunting gear—jeans and black T-shirt with a black leather jacket that fit snuggly over his biceps and broad shoulders. The heat could be stifling in Texas in midsummer, but Drew was rarely without that jacket. He liked to keep stakes in the inside pocket and the gun he always carried he tucked into the waistband at the back of his jeans. Drew moved with the fluid grace of a gymnast and had the body to match. I tried not to drool, but I’m not sure I was successful.

He nodded to the vampire’s body. “I think that’s four to your three.”

Drew chuckled, reached into the front pocket of his jeans and produced a handkerchief. He used it to wipe the blood off the tip of his stake. He was meticulous in his actions, taking great care to ensure it was spotless before putting both the stake and the handkerchief into the inside pocket of his jacket.

“All right, I don’t think. I know. That’s four to your three. You’re slacking, Mia.”

“Technically, I staked that last vamp before you,” I reasoned. “So that one should belong to me, or at the very least he should count for both of us.”

“You missed his heart.” Drew shot me a mock, outraged expression. “That one’s mine. No cheating.”

I rolled my eyes. “Whatever, oh strong and powerful vampire hunter. If it means that much to you, I’ll let you have him.”

A slow, easy smile spread across Drew’s face. It was an open smile with plenty of gleaming white teeth and the expression made it all the way to his eyes. There was always so much joy behind his smiles, so much passion. I’d seen Drew’s smile hundreds, if not thousands of times before, yet each time it caused my heart to beat faster. Everything about him got my pulse racing, in fact. His dark, wavy hair always looked like he’d just climbed out of bed and left it that way. Some people might call it messy, but to me it was sexy and added to his rugged charm. Drew stood a few inches taller than my five-foot-eight frame and his body was lean and muscular, much like my own. We were both Texan natives and we loved the outdoor life so his skin, like mine, had a deep, permanent tan, only on him it was more of a glow—iridescent or maybe that was just his personality shining through. Drew was funny, sweet, kind and thoughtful, and a hundred other adjectives I’d used to describe him at one time or another.

Reviewed by Read Your Writes

With the introduction of the merpeople King, comes an opportunity for Mia and Drew to truly explore their feelings for each other. This results in an expected but sizzling climax; pun intended. Read more reviews

Share what you thought about A Merman in Miami and earn reward points.

Today we are pleased to be hosting Amy Armstrong on her new release blog tour. The latest volume and third in her Huntress Chronicles series, A Merman in Miami,  was released last week.  The series combines romance and urban fantasy, hopping from slayer to slayer, each in a different city and after a different baddie. All that tightly woven into a novel length story. Sound good?

Amy Armstrong - Exclusive feature for A Merman in Miami

What can we expect from A Merman in Miami?

A Merman in Miami is set in the same world as the first two books in the Huntress Chronicles series. It’s a world much like our own, but in which paranormal beings live among us ― albeit in secret. In this world, the art of hunting vampires is handed down from generation to generation and is honed in special training academies all over the world. Like the first two books in the series, Mia the heroine of the story is tasked with finding one of twenty something grimoires before they fall into the hands of demons ― a mission which will take her and her hunting partner Drew to the very depths of the Atlantic in search of the secretive merpeople.