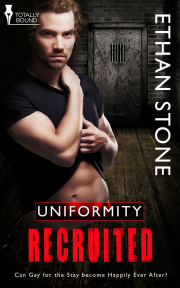 Inmate Dylan Hoss never thought he’d fall for a man in prison. He also didn’t think life on the outside would be more dangerous than inside.

Dylan Hoss enjoys sex with men inside prison walls and finds a willing partner in his new cellmate, Joey Campbell. Dylan is confused when he develops actual feelings for him and is devastated when Joey disappears from his life. Dylan is given new hope thanks to an early release.

He’s gets a job working for wealthy—and gay—environmentalist Keegan Malloy. While dealing with his newly discovered sexuality, a burgeoning attraction to Keegan and several family issues, Dylan is recruited for an FBI investigation into a series of environmentally based bombings. The eco-terrorism case turns even more dangerous when Dylan’s sister is harmed, and he vows to do whatever it takes to expose and bring down the bomber—even if it costs him his life.

Reader Advisory: This story contains violence and a brief scene of attempted rape.

“Hoss!” A voice rang out in my cell. Never having any privacy was something I couldn’t get used to even though I’d been in prison seven years.

“Hoss!” It was Oxborrow, Unit Six’s Senior Correctional Officer, the officer in charge of day to day operations. He was in the unit control room using the intercom system.

“You’re getting a celly today. Get ready.”

Getting a roommate in prison was a total crapshoot. I’d had a few good ones in the seven years I’d been down, but I’d also had some horrible ones. Caseworker Emerson had told me the man was new to the system and Emerson didn’t expect him to be a problem child. Fish, what inmates called newbies, usually faced the same one or two issues.

Either they came in ready to fight thinking they had to prove themselves, or they were too scared and let other inmates take advantage of them.

Emerson knew I’d treat the man with respect and wouldn’t take advantage of him. And if he needed to be knocked down a few pegs, I could do that, too.

An hour or so later, I heard the unit doors slide open and peered out the small window on the steel door that kept me locked in. A CO named Lachey escorted an inmate still wearing the orange jumpsuits inmates wore in the lockdown units. Unit Six, where I was celled, was General Population, or GP, and we were allowed blue pants and blue shirts.

My new roommate walked with his head down so I couldn’t see his face, and, thanks to the baggy jumpsuit, I couldn’t see what type of body he had. He did seem pretty short, but anyone would seem short next to Lachey who had to be at least six-two.

Lachey escorted my roommate up to my door and instructed him to face the wall next to the door.

Protocol for Seely State Prison GP was that the cell door was never opened unless we were cuffed. Lachey open the food slot, a rectangular flap about waist high, and I put my back to the door and stuck my hands out.

Lachey put the handcuffs on me and said, “Have a seat.”

I shuffled to the bunk and sat. Lachey peeked in the window to ensure I was doing as he instructed, then motioned to the control room to open the door.

My celly stepped in and we made eye contact for a second before he darted his eyes away. He appeared to be a little scared. A lot scared, actually.

He backed up to the door so Lachey could remove his handcuffs. My body tensed and I shifted my weight from one foot to another in case he tried something. I hated being this vulnerable. If he wanted to come after me, he’d have the advantage since I was restrained and he wasn’t. Feuding roomies had more than once taken the opportunity to take a swing or kick at each other in the same situation.

When he was uncuffed, my roomie stepped to his right in front of the stainless steel toilet and sink, giving me room to walk to the door. He scanned the room while Lachey removed my handcuffs.

“At least not until you’re off the tier, right?” I joked.

Lachey laughed but my roommate didn’t. He watched me with wide eyes.

“My name is Dylan Hoss.” I extended my hand.

He hesitated before shaking my hand. “Joey…Joey Campbell.”

I took a moment to check him out. I put him about five-six, three inches shorter than me. He had brown hair and an eye colour I hadn’t seen often. I had to be closer to be sure—they were grey but almost seemed silver. His grip was firm but cautious.

“What do you call a clairvoyant midget who escaped from prison?” I asked.

I finished the joke. “A small medium at large.”

Joey raised an eyebrow before the corners of his mouth slowly turned upward.

“You can relax, Campbell. I’m just here doing my time. Don’t want any trouble. I’ve been down that road.”

“Relax? Is that even possible in prison? Shit, everything I’ve heard—”

“This place is nothing like the movies,” I said. “You’re in a maximum security. It’s pretty hard for another inmate to get you.”

“Except for your celly.”

“I’m just supposed to trust you?” He narrowed his eyes and scrutinised me.

His gaze made me feel self-conscious and I ran a hand through my messy dishwater blond hair. I hadn’t had a haircut in more than a year so the curls had taken over. Getting a haircut involved being cuffed and letting another inmate take a razor to my head. It wasn’t something I liked to do, so I let my hair grow.

“You kind of have to trust me,” I told Campbell. “We’re in here together after all.”

“I do not have to trust you,” he said in a low voice. “I have to live with you. But trust doesn’t come automatically.”

I shrugged. There wasn’t anything I could do to change his mind.

I raised an eyebrow.

He cracked a smile when he realised what he had said. “The bunks, I mean. Do I got the top or bottom bunk? I wasn’t asking what… Never mind.”

“You get the upper bunk.” I realised Campbell didn’t have any bedding, not even a mattress. He should’ve come in with a ditty bag—a pillow case holding a pillow, sheets and a towel. “You need to call up the senior in the bubble and let him know you need bedding.”

“The unit control room.” I stood at the door and motioned for him to come close. He was reluctant but finally did. We both peered through the window as I pointed. “It’s called the bubble because it’s surrounded by windows and sits higher than the rest of the tier.”

“The CO in the bubble running things is usually the senior officer. Sometimes it’s just a regular CO. The guy up there right now is Ox. He’s a lazy bastard so good luck getting anything from him.”

I motioned toward the light in the cell. The wall over the toilet had a small plastic mirror that had been scratched so many times it was unusable. The light was at the top of that small wall as well. It was secured so we couldn’t get to the bulbs behind the cover, but lots of inmates, myself included, could get behind some of the covers. Below the light and above the mirror were two buttons and a speaker box. One button turned the light on and off, while the other alerted the CO in the bubble that we needed to talk to him.

Ethan Stone has recently returned to Oregon and is working on re-growing his web feet. He has been obsessed with two things in his life: books and all things gay. After spending years trying to ignore the voices in his head, he finally decided to sit down and listen to them.

What he discovered was a perfect union of his two obsessions. Ethan used to have a day job that paid the bills. He wore a uniform to work and he looked damn sexy in it. Now he gets to wear sweatpants and watch movies all day.

It’s a thrilling story with plenty of twists and turns. I enjoyed the breathtaking pace of the book. The characters are well developed and even minor characters are critical to the s...

It’s a wonderfully layered, involved story from beginning to end. When I started reading, I kept thinking that it would be a simple mystery/romance. But simple doesn’t even come c...

Share what you thought about Recruited and earn reward points.

Recruited has been nominated for Best Mystery/Whodunit.

Recruited is a finalist in the Gay Mystery/Thriller category at this year's Rainbow Awards.