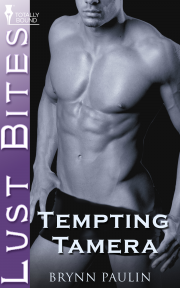 A new job, a new home, a new lifestyle…

When teacher Tamera moved to Cranston to teach, she knew the lifestyle she'd encounter would take some getting used to. Though she was raised in an open-minded household she doesn't have experience with ménage relationships therefore her attraction to her fellow teachers, Kai and Brian, takes her by surprise.

When the trio is stranded together during a freak snowstorm, Tamera discovers her attraction isn't one sided. In fact, the men have been waiting for the opportunity to show her how perfect three can be.

“Annie, do I need to call your mom and dads?” Tamera Gentry asked the third grader standing on the other side of her desk. Three months ago, she’d never thought such a phrase would pass her lips. She’d barely imagined such a situation existed. That was until she’d come to Cranston to teach.

The little girl shook her head and Tam softened her gaze. “Then you need to stop talking in class and do your assignments. Understood? The other students can’t do their work if you’re distracting them and it’s affecting your work, too. Let’s try a little harder tomorrow, okay?”

“Okay. Now go on and catch the bus. I had Ms. Thompson make sure they wouldn’t leave without you.”

Tam leaned back and shook her head as her student scurried away. No doubt she’d be bursting with whispers again tomorrow. The adorable little angel was full of charm and the devil. Which of her fathers she’d gotten that from anyone knew. Fathers...

Tam stared off into space. She didn’t particularly want kids—teaching made great birth control—but the thought of having four strong arms holding her made her stomach wobble in ways she’d never experienced before. What would it be like to belong to two men? She supposed she could ask. Cranston was a gated community built on lifestyle not wealth. This was no Stepford, but life here had an idyllic quality she’d never experienced elsewhere. That didn’t stop her from occasionally feeling like an outsider. She was a single woman in a group of triads.

You could have someone. You only have to say yes.

Startled, she looked up to find her co-worker, Brian, standing in the doorway to her classroom. Okay, she wasn’t the only single in the community. There were several others and one was junior high writing teacher, Brian Goodson. She bit back a sigh worthy of his most besotted student and smiled. She could get lost in his blue eyes. They really shouldn’t let men who looked as hot as he did be in the classroom with teenage girls. Brian could be trusted completely, but Tam doubted any of his female students got a lot of work done in class.

“Hi, what’s up?” she asked. Besides my heart rate. She swallowed and forced her gaze to remain on his face rather than to drop to his fly. She flexed her fingers in her lap, wanting to go to him and brush his dark brown curls back from his forehead...then kiss him...then slide her hands down his chest and—

My God, she was one impure thought away from sexual harassment. Hastily, she looked away and grabbed a pen, shoving it into one of the holes in her pen holder. The action reminded her of a cock slamming home. Her cleft contracted, her thoughts immediately segueing to Brian’s cock to spreading her wide while another man held her, cupping her breasts and kissing her neck.

What was wrong with her? 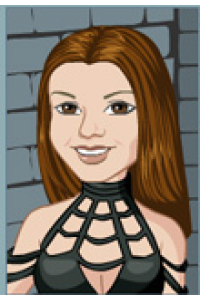 Grade B+! Tempting Tamera is a great read. I was impressed with how classy the m�nage a trios scenes were written and how much emotion she gave to her characters.

Share what you thought about Tempting Tamera and earn reward points.