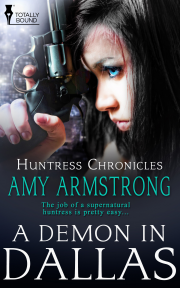 A Demon in Dallas

Two years ago, vampire hunter Raven walked out on the love of her life in order to save his, but now that she needs Connor's help to locate a demon in Dallas, can she keep their encounter to business only, or is she about to fall for the sexy were-shifter all over again?

When her partner Matt is kidnapped by vampires, it's up to vampire huntress Raven to locate him. But during her rescue mission, she nearly succumbs to the wicked charms of an evil fairy and is blackmailed by a devious angel who wants her to locate a demon in Dallas. Raven's superior in the hunters' council gives her just seventy-two hours to find Matt before they send in a team of hunters whose mission statement is kill first, ask questions later. Raven's going to need help, but the only person she can turn to is her ex-boyfriend Connor, a werewolf who Raven hasn't been able to get out of her heart or head.

Unwittingly thrown into a battle between good and evil, and with danger lurking around every corner, Raven must race against the clock to locate the demon and rescue Matt, while dealing with her feelings of guilt for walking out on Connor two years ago…even though she only did so to save his life…

Reader Advisory: While this book can be enjoyed as a standalone, it is best read as part of a series.

In the first book of the Huntress Chronicles, Amy Armstrong introduces the reader to a strong female warrior who is part of a secret society keeping the world safe from evil. In an act of pure love,...

Share what you thought about A Demon in Dallas and earn reward points.