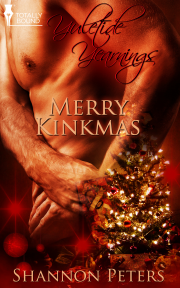 Phoebe Larkham is a wild sex kitten wannabe, and she knows exactly who she wants to get all wildcat with — co-worker Matt Andrews. Phoebe decides to wage a campaign to make Matt notice her as a wicked and willing wanton — with disastrous consequences. She decides, for his safety, that she must abandon her Operation Mistletoe.

Phoebe Larkham sighed as she fussed with folders on the conference table.

I just might end up killing him if I see him today.

Not intentionally, of course, but the way her luck was running, Matt’s demise wouldn’t surprise her. The poor man wouldn’t live to see Christmas—tomorrow.

For eight months she’d been waiting for her colleague, Matt Andrews, to notice her. Their desks were adjacent, and occasionally they’d worked together on a project. The man was driving her crazy with lust. He was tall, with curly blond hair that flopped over his brow and just begged to be tugged to bring his head down for a long, hot, wet kiss. A very long, hot, wet kiss. Her nipples peaked at the thought.

His shoulders were broad, his hips tapered in a way that suggested some form of intense physical activity. She often daydreamed about what he did...and sometimes how he’d do it with her. Slow. Long. Fast. Hard. She blinked and frowned down at her work. He always carried a gym bag around, and usually went to the club for a session, but in all her casual snooping she had yet to discover exactly which fitness club he was a member of. And she’d tried. Boy, had she tried. Whatever he did, it was working. He had a butt her fingers tingled to touch. And on those days he came in without shaving...well, she just wanted to grab those chiselled, roughened features and mash them into her breasts. Among other things. She shifted in her seat as heat blossomed between her thighs.

If he knew the fantasies that went on in her mind when she sat across from him in the meeting room she was sure they’d make him blush. Hell, they made her blush. And burn. And tingle. And...well, go all wet between her legs. She rubbed her knees together under her desk, creating a delicious pressure at the apex of her thighs. A branch outside the conference room window snapped under the weight of the snow and jolted Phoebe from her reverie. She pouted.

But that’s all they are—fantasies.

She was too shy to actually take the lead, be the aggressor. Every time she tried to work up the courage, she’d meet his eyes—and run.

His eyes fascinated her. That blue gaze mesmerised her each time she caught his eyes. And it was his intense stare she thought of in the dark of night, while she plunged her Dream Maker Cliterrific 2000 into her pussy and brought herself to climax.

Of course, he had the great personality and fun sense of humour to complete the package. They’d become very good cronies, which just added insult to injury. He saw her as a friend, not the wild sex bunny she wanted to be with him. He made her think of sex, and she apparently made him think of...well, watching football and swigging some brews. With other friends.

Shannon enjoys writing her wicked and wanton tales as it gives her a chance to stretch her imagination—anything goes! She lives in Australia with an understanding and supportive husband, and enjoys hanging out with friends—whether it's a BBQ on the pool deck or the beach, or toasting marshmallows in the mountains, she finds inspiration in the smallest delights.

a fun story to read...The emotions and chemistry between the two are very intense...

Share what you thought about Merry Kinkmas and earn reward points.