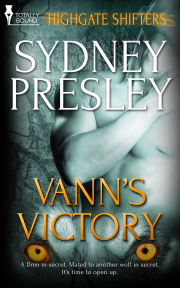 Book 2 in the Highgate Shifters series

Being a Dom in secret—being mated to another wolf in secret—is something Vann has always done, but now he has the chance to be open about his whole life.

Vann grew up under the rule of an alpha at Crossways Compound, who controlled every aspect of his pack members’ lives. Used to obeying without question, Vann suddenly finds himself in a position where he can make his own decisions outside his sexual relationship. In the past, his trysts with his subby lover, Kip, have been in secret, snatched moments away from security cameras or listening devices. Now they’ve been welcomed at Highgate, a safe haven, life should work out beautifully.

But there’s something Vann has to do first. He has to return to his childhood compound to right the wrongs that were done there. Along with Kip and members of the Highgate security team, Vann has to play the biggest role of his life so far in order to bring down the alpha at Crossways and rescue some cross-bred cubs. It isn’t going to be easy, going against someone he’s been conditioned to obey, but for the sake of his pack and the safety of the cubs, he’ll do whatever it takes.

Kip is determined to be with Vann every step of the way. Usually, Kip is submissive in all aspects of their life, preferring to bow his head and only speak when he’s given permission. But their return to Crossways changes all that. The danger there is too great for Kip to wait for Vann’s instructions on everything he does. Kip knows that to keep Vann safe, he must become more dominant—or die trying.

Reader Advisory: This book contains scenes of exhibitionism and voyeurism.

Vann’s stomach churned. The plane was coming in to land. He closed his eyes, shaking all over. What if they crashed? What if he never got to save the shifters at Crossways? More importantly, what if something went wrong, if there was an accident, and he never saw his mate, Kip, again? Should he be ashamed that this was his main fear? Losing Kip had always been one of his nightmares. Except he’d never thought it would be because of an accident. Or not an accident in the real sense of the word. No, an ‘accident’ designed by Bennett, that would be more like it.

He concentrated on that instead of the gut-knotting experience of landing. Bennett, the former alpha at Crossways, had forever been a looming, frightening presence in Vann’s life and mind. One wrong step and Bennett would tell the rest of the pack to rip him apart until he was dead. Being caught with Kip in an uncompromising position would have been more than good reason for Bennett to order an execution. Hiding had been the name of their game.

He glanced across at Kip, who was staring out of the window. Vann should have known Kip would act like this, a kid in a candy store, soaking everything up and loving it. Kip had a brilliant zest for life, for living it the best way he could in any given circumstance. He looked on the bright side most of the time, something Vann had yet to learn.

Damned if I’ll look out of that window.

Just the thought of seeing the land below, a patchwork quilt humanity had sewn together, had him feeling even worse. It would bring home how high they were, how far they’d fall if the plane ran into difficulty. Turbulence. A sudden storm. The idea of crashing freaked him the hell out.

As it turned out, everything went smoothly and he needn’t have worried. Funny how he got himself all coiled up over things then they turned out okay in the end. He supposed, what with his upbringing, he always expected the worst. It wasn’t surprising. Bennett had ruled with an iron fist, and no one—no one—had disobeyed him. Vann wondered if he’d be able to change once this mission was over. If he’d learn to accept that life wasn’t always doom and gloom—that there was goodness out there, ready for him to experience it. If only he had the courage. And life could be good, he’d seen that at Highgate. Bennett had a lot to answer for. How many of the Crossways pack felt just the same as Vann did? How many of them were frightened beneath their brash exteriors? He’d bet there were quite a few.

It’s all over now. He’s been caught. But Wickland hasn’t. We still have him to deal with.

He straightened his shoulders as the plane touched down, and let out a long breath of relief.

And we will deal with him. I have to keep positive. Everything will be all right now we have the Highgate shifters on our side.

It seemed the time to get off the plane passed in a flash, and Vann’s breath caught as he strode along the tunnel that led to the airport. He felt enclosed, claustrophobic, and coached himself to keep a level head. He had to admit that his first time on an aircraft hadn’t been as awful as he’d expected, although he’d been scared shitless of getting on something so big. Yeah, he’d seen them flying over Crossways, but during his shielded childhood, he hadn’t ever thought he’d end up getting inside one. He had no idea how they worked. His education was limited to English and math as he’d grown up, and that had been taught to him by his mother.

There’s so much to experience. So much I don’t know anything about, but hell, I can experience it now. Me and Kip together, taking on our new world.

The thought of it had Vann smiling.

Kip walked by his side, head bowed, as was his custom. God, Vann loved that little man. Kip was a slender, white-haired, tiny sub who preferred their sexual lifestyle to extend from the bedroom into their day-to-day lives. That had been a learning curve for Vann but he’d gotten used to it over time. The Highgate shifters probably thought their relationship odd, but he was past caring what they thought now. Highgate’s alpha, Sergeant, had told his pack what Vann and Kip were about, and if they didn’t like it? Well, that was their problem. The days of Vann wanting to be accepted were long gone. He loved Kip and vice versa, so what did the opinions of other people matter?

Just like book one, we have a lot of players and that list grew when we got introduced to Caleb and the families. But the author does a good job keeping you engaged with the story and their roles so not...

The well orchestrated and emotionally binding tale draws the reader in and captures the imagination. The story is a short and passionate romance.

Share what you thought about Vann's Victory and earn reward points.

Helena Maeve, Faith Ashlin, Sean Michael. All of them have such depth to their work. Layers instead of flatness. There is always so much more than what is written. Fantastic trio.