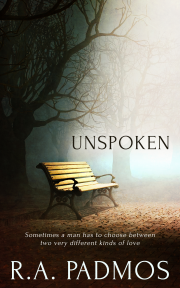 Sometimes a man has to choose between two very different kinds of love. But what if there is no real choice?

When Stefan meets Adri, it is love at first sight. It does, however, take some time before he recognizes his own feelings. He’s a married man—a family man—with a strong sense of responsibility. In Dutch society of 1935, sex between men over the age of twenty-one might be legal, but acceptance is still a long way off.

As a working-class man without a steady job, he doesn’t have the means to ignore society’s rules and create his own little paradise in which both he and his lover can be together, without his family having to suffer poverty and shame. Despite all this, the lovers find a way to carve out moments of intimacy and happiness.

Then the Germans march into Holland and nothing will ever be the same again. The occupation, which will last five long years, offers both danger and chances, but choices have to be made—choices of the head and choices of the heart.

Reader Advisory: This book contains a scene of M/F intimacy.

“Hey, shuffle along, will you?”

Stefan looked over his shoulder, right into the somewhat annoyed face of a young man, and mumbled an apology. “You have any idea what time it is?”

The young man took out a cheap-looking pocket watch. “A quarter past ten.”

It was an ordinary day in September, 1935, in a Dutch city that could be any Dutch city. Someone was waiting behind him in line at the unemployment office to get the first control stamp of the day. Stefan had no idea his whole life had changed during the few seconds it took to ask an inconsequential question.

He got his stamp, checked carefully when he was due for the next one and only realized why he waited those few seconds extra before he stepped outside when he saw the owner of the pocket watch.

Not a word was spoken about it. He simply walked next to the man whose name he didn’t even know, through the streets of their home town, not paying any attention to the all-too-familiar red brick three and four-story houses with their green and brown-painted doors.

“I don’t think we’ve ever met,” the man walking alongside him said. “I’m Adri Heyman. Officially painter and plasterer, but you know how much that’s worth these days.”

“About as much as being a carpenter, I bet. Stefan Doffer’s the name.” He was half aware of the tightening deep and low in his belly, of the beginning of an erection pushing against the fly of his clean but worn corduroy trousers. Only now Marije entered the corner of his thoughts, her voice warning him it was the dangerous time of the month.

Stefan shrugged. “I live close by, just a few minutes’ walk from here. Why don’t we see if my wife has a cup of coffee left for us in the pot, before we join the next queue of a few hundred men all wanting the same job?”

Day after day he stood in line, waiting for the next stamp on a piece of paper as proof that he deserved the twelve guilders which would be put into his outstretched hand once a week, like he was begging for alms. And wasn’t that exactly what he was doing? He had watched seasons changing into other seasons, seen his eldest child go from newborn to toddler to schoolchild. He no longer tried to understand why there was no demand for his craftsmanship and willingness to work hard for anyone who would give him an honest job for more than the weekly pittance that kept his family from starving right away.

How resigned to the hopelessness of reality he had become! On some days, he knew the only thing that kept him from complete desperation and giving up altogether was the deep-seated feeling of duty concerning his family. No despondency had yet prevented him from spending most of his days looking for work—any kind of work—so that he could hold on to the remains of his pride as a husband and provider, but for how much longer?

“We’re there.” He took out the front door key to the upstairs apartment, a rather fancy name for three small rooms and an even smaller kitchen. The family shared the attic with the elderly couple who lived one floor above them, but their neighbors kept pretty much to themselves and apart from occasional small talk, Stefan saw or heard little of them. The neighborhood of houses built for skilled laborers and lower rank civil servants was decent enough, with poverty safely hidden behind a façade of weekly scrubbed pavements and shiny polished doorknobs. They paid the rent on time, even if it sometimes meant going without a decent, warm meal for a couple of days because they were clean out of gas tokens, and the man collecting the funeral insurance got his money before anyone else.

Stefan had invited the man to his home because he knew with absolute certainty Adri would find nothing there any married man should be ashamed of. Marije kept a scrupulously clean house, fighting her own private war against slow decline. He wasn’t surprised when she greeted the unexpected guest with an outstretched hand and an open smile.

Selle, aged four, and three-year-old Wilfred stared with wide-eyed curiosity at the strange gentleman who had followed their dad up the stairs, while their mum poured out three cups of real coffee and two beakers of buttermilk. Stefan knew the eldest of the two would be bragging to his big sister, as soon as she came home from school, that he had shaken the hand of a new someone she hadn’t even met yet. It almost made up for the long wait before he would be old enough for kindergarten.

“We don’t get many visitors, except for their uncles and aunts and grannies, of course,” Marije explained.

“I’m not intruding on your daily routine, I hope?” apologized Adri.

Stefan knew his wife’s reaction before she started the first word. “A housewife who can’t find the time to sit down for a cup of coffee isn’t worth her title.” Still, the house was her domain and he was surprised he had made the invitation to Adri without giving it a moment’s thought. It was definitely not like him.

“You met Stefan while looking for a job?” Marije poured out a second cup of coffee.

Stefan avoided Adri’s gaze, as if he were being accused of a crime he had yet to commit. “He’s a house painter. I’m a carpenter. You’re bound to see the same faces over and over again.”

He trusted blindly that within minutes Marije could make anyone feel at home. And, soon enough, Adri was telling tall stories about his landlady.

Half an hour later, they walked to the first business that was rumored to be needing someone for a cleaning job.

“You are incredibly lucky, having a wife like that.” Adri told Stefan what Stefan had known for years.

There wasn’t a job to be had. And for the first time in months, he hardly cared.

In no particular order: woman, writer, in a relationship with my wife since 1981 (though we had to wait until 2001 until we could actually get married), mother of two grown sons, owner of cats (I can pretend, can’t I?), reader and a lot more.

RA Padmos has done it again. Starting with the achingly beautiful cover, Unspoken is another haunting, evocative read which will remain with me for some time.

Unspoken is all about love, i...

I enjoyed this book. It's very different from my usual reads. I loved how, while his body gets with the programme real quick, it takes some time for Stefan's BRAIN to finally catch up. I
love...

Share what you thought about Unspoken PRINT and earn reward points.