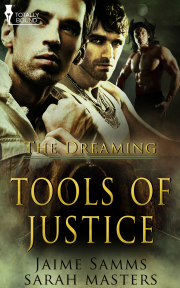 Book 1 in the The Dreaming series

One cop. One killer. Both dreamwalkers. Not every dream should see the light of day…

Three very different people have one thing in common-a dreamscape steeped in horror. Barry has had dreams of violent death all his life, and as a cop, he now works to solve the crimes his dreams tell him about in hopes he can save at least one victim from suffering the fate he faces every time he lays his head on his pillow. His ex-lover, Tag—now his boss—has no idea how to help him cope other than to protect his job…and try to protect their hearts from the dreams that could end up killing them both.

Leyton welcomes the dream state that shows him his next victim. He's been a killer for as long as he can remember, and the land where he walks in shadow beside the horn-headed man who guides him feels more like home than the waking world. Now, in addition to seeking out those who would kill the innocent and ending their lives in his own special reign of terror, Leyton is promised a bride—someone to love him forever. It seems everything he's ever dreamed is about to come true.

Jessica just wants to get her life back after her boyfriend is murdered and she is abducted. Twice. Finding herself at Leyton's mercy is a nightmare she soon finds is only the very beginning. When the horn-headed man visits her, she knows nothing will ever be the same again.

The four of them now have to find a way to navigate the real world while the dream state dictates their very lives and threatens everything they hold dear. If they manage to catch a few killers and save a few innocent lives along the way, that will have to be their compensation for the "gifts" given by The Dreaming.

Barry floated a bit, on drink or desire, not quite connected to himself as his lover laid the tie over his closed eyes and tied it. "Really?" A bit of his hair caught in the knot, and he squirmed.

"Really. Trust me." A tongue slicked over his ear, and the squirm turned to reaching.

He should recognise the voice, thought maybe he did. Something shifted. A scent, making him think of blood or rust, drifted by like cigarette smoke. He stood still—nude, blind and bound—and the voice chuckled softly.

He nodded, straining to find the familiar—so close he could almost reach a name, a face...something he knew. The hands that had tied his behind him, lowered him until his chest rested on something hard under an inadequate layer of padding.

Easier said than done. Barry let out a breath.

"It isn’t going to hurt. Promise."

"Shhh." A hand ran through his hair.

Had Barry caught the scent of Old Spice? The particular drag of Tag’s bad leg?

There was a sound behind him—shuffling, grunting—then frigid air engulfed him. He shivered, glanced over his shoulder as though his covered eyes could make out what was going on.

The hands that touched him next weren’t Tag’s. They were too rough, too demanding, and he flinched, made a move to stand. The hands pushed him back.

"Shh." The sound seemed so far away, too little for comfort or reassurance.

Cold air swirled around him. He struggled to stand, but whoever held him was too strong.

"Don’t. Tag, don’t go!" Panic squeezed out rational thought, and he strained. The only answer was a tighter grip on the back of his neck and one of those rough hands running up the inside of his thigh. "Tag!"

The hand moved to clamp over his mouth, leaving him struggling for air. His bare feet on the cold cement chilled him, toes ineffectual claws, gripping nothing. No more floating. Only shivering, cold, and a gag—its straps cutting into his cheeks—and no idea how it had got there. The ball clogged his words, turned his begging to garbled, tear-washed nothing. He shouted inarticulate sounds no one was going to hear. Struggling only earned him bruises and didn’t stop the invasion of those rough fingers or the wave of pain from being stretched too far, too fast.

The hand came back, around the front of his neck this time.

This wasn’t how it was supposed to be. Not how he wanted to go—bound and gagged and fucked, for Tag to find his body like that.

Blackness darker than the blindfold sucked him under...

He always awoke screaming. His voice had gone raw from it, and he only barely remembered the terror that haunted the dark. He glared at the obnoxious red glow of the clock. Not quite five. His gaze shifted to the bottle distorting the numbers, but, for once, he turned away from it, untangled himself from the sweaty sheets, and shuffled off to the bathroom.

An hour later, a good portion of the tar-like station coffee he’d tried to pour himself landed on the table beside his chipped mug. He sopped it up with the last of the napkins and tossed the sloppy mess into the trashcan. What was left of it, he took to his desk. It might taste like all hell, but it would scour the fuzz off his tongue. The computer hummed when he turned it on, the sound a comfort in the dim stillness of the deserted police station. Maybe he could get a few reports finished before his shift started. Better paperwork than the four walls of his empty apartment.

He wasn’t sure how long the screen had been staring back at him, or how long the flying toasters had been careening around the black void, when he blinked back from his stupor.

He jumped at his partner’s hot breath on the back of his neck.

"Still daydreaming about Tag banging you within an inch of your life?" He thumped Barry on both arms.

The coffee cup slipped from Barry’s grasp. The last few, cold sips dashed out across his desk and spattered the screen, the keyboard, and his pants.

Ross snickered and plopped down in his seat across from Barry. A glare only quieted the man’s mirth—it didn’t banish it.

"Hey. I tease because I care."

"Seriously, dude. You have got to move on." Ross shook his head and jabbed at the ON button of his monitor. "That ship has sailed, man."

"Whittaker!" Captain Taggart’s voice sliced through the room, and Barry winced. "My office."

"Used to like the sound of that," he murmured as he gave his splattered khakis one last dab and rose. Ross didn’t snicker this time, and Barry patted his shoulder as he passed. "Just call me Davey Jones."

A memory of his latest dream shuddered through him as his fingers curled around the door handle to Tag’s office. He was already in a cold sweat when he stepped inside and pulled the door closed behind him. It was impossible to meet his captain’s eye with the irrational thoughts of blame, completely unearned, grinding through him.

Barry’s head popped up from where he’d been studying a dried splash of coffee on the linoleum.

A heavy sigh filled the room and settled around them.

Tag finally retrieved a folder from his desk. "New case." He handed it to Barry. "Dead guy, missing girl."

Barry took the folder, flipped it open, glad for the new focus. "Do we like her for it?"

"Doubt it. Little thing like that?" Tag shook his head.

Barry understood the comment when he saw the pictures of the victim.

"Beaten to a bloody pulp," Tag confirmed, as if the visual wasn’t enough. "Garrotted. Missing woman’s about five foot two, ninety pounds on a rainy day. She didn’t do that."

Tag’s eyebrows went up. "That would be the case, wouldn’t it?"

"And no idea where she is now?"

"If I had to guess? Run. Whoever did this had to be one scary son of a bitch."

Sarah Masters is a multi-published author in three pen names writing several genres. She lives with her husband, youngest daughter, and a cat in England. She writes at weekends and is a cover artist/head of art in her day job. In another life she was an editor. Her other pen names are Natalie Dae and Geraldine O’Hara.

Share what you thought about Tools of Justice and earn reward points.

Other books in the The Dreaming seriesView Series Page