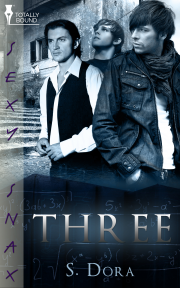 Even a happy single thirty-something, living mainly through his intellect, has certain needs. They're met by an open-minded, adventurous young gay couple more than willing to invite him to their bed.

Can a single man in his thirties be truly happy? To Owen Bartlett, writer of books and articles about the history of mathematics, the answer is a resounding yes. But he still has some very human needs.

So when he meets Sebastian and Davin, a young and attractive couple, and they ask him to spend the night with them, he isn't going to refuse. The intensity of the sex the three men share that night goes beyond anything Owen has ever experienced, certainly when he discovers Davin craves to be dominated by his partners, and Sebastian is all too willing to give his lover what he needs.

Owen is certain it was a one night thing only, but he couldn't be more mistaken.

He needed to get out. Get away from the books and the computer and the deadline for his next article, the one that was grinning at him from every corner of his three-room flat. He needed the company of his fellow men—a human voice, someone smiling at him in invitation, sharing the latest gossip... Who was he kidding? He needed sex. His body screamed for that of another man, for muscles and cock and balls and the firm grip of someone who understood. Simply understood. Owen Bartlett enjoyed being an author. He had published half a dozen books and many more articles about the history of mathematics and mathematicians. His intellectual success, however, didn’t stop his brain from reminding him it was still very much a sexual organ. Lucky that Theo had sent him yet another text. I do expect you at our party. No excuses. Theo’s partner Jack Clark’s latest business venture, a hotel explicitly aimed at gay and lesbian couples and their children of every age, would be opened to the public in a few days. * * * * On party night the hotel was filled with the usual crowd of writers, artists, musicians, pretty girls—who might actually be pretty boys—and those who hadn’t a creative bone in their body, but happily paid for it all. Then he saw...two boys. Or men, rather. They had to be in their early twenties, with long legs in skinny jeans, boyish smiles and, for their generation unavoidable, tattoos. Owen observed them, allowing himself the illusion he wasn’t really watching. Not that it mattered. Creatures like these moved in a space where men like him didn’t exist, or were background material at best. Admiring, hungry eyes made their youth and beauty shine all the more. “I saw you looking.” He heard surprisingly little judgement in the voice of the younger man. He was the taller one of the two, Owen noticed, and stronger built too. “I’m sorry, I didn’t mean to—” “That’s okay, I’m starting to get used to it. And in case you wondered, yes, we are.” Owen smiled. “It’s pretty obvious the two of you are very much together.” “I’m not trying to hide I’m with Davin. But that’s not what I was referring to.” “Nice name. Welsh?” “You don’t know of him?” The young man looked genuinely surprised. “Theo hasn’t introduced us yet and he knows far too many people for me to remember them all anyway.” Owen offered his hand. “I’m Owen Bartlett. I write for the Odds and Evens magazine, among others. I’ve known Jack and Theo since before I was your age, so that explains the connection. And I offer my humble excuses for the less than subtle admiration.” He didn’t think he had spoken so many words in weeks. Silly, how beauty made a fool out of any man. Ah well, so far the hunt for a willing and able guy for the night had brought him nothing but undignified drooling over a couple of cute youngsters. “Nice to meet you, Owen Bartlett. I’m Sebastian Lane, and the pretty boy smiling at us is Davin Tellam.” Nice firm handshake. Direct eye contact, but no flirting. Sebastian clearly tried to look even taller than he already was.
Buy Now

a wonderfully crafted story of three people falling in love...a touching love story that pushes the boundaries and shows how strong communication and trust make a relationship...

Share what you thought about Three and earn reward points.