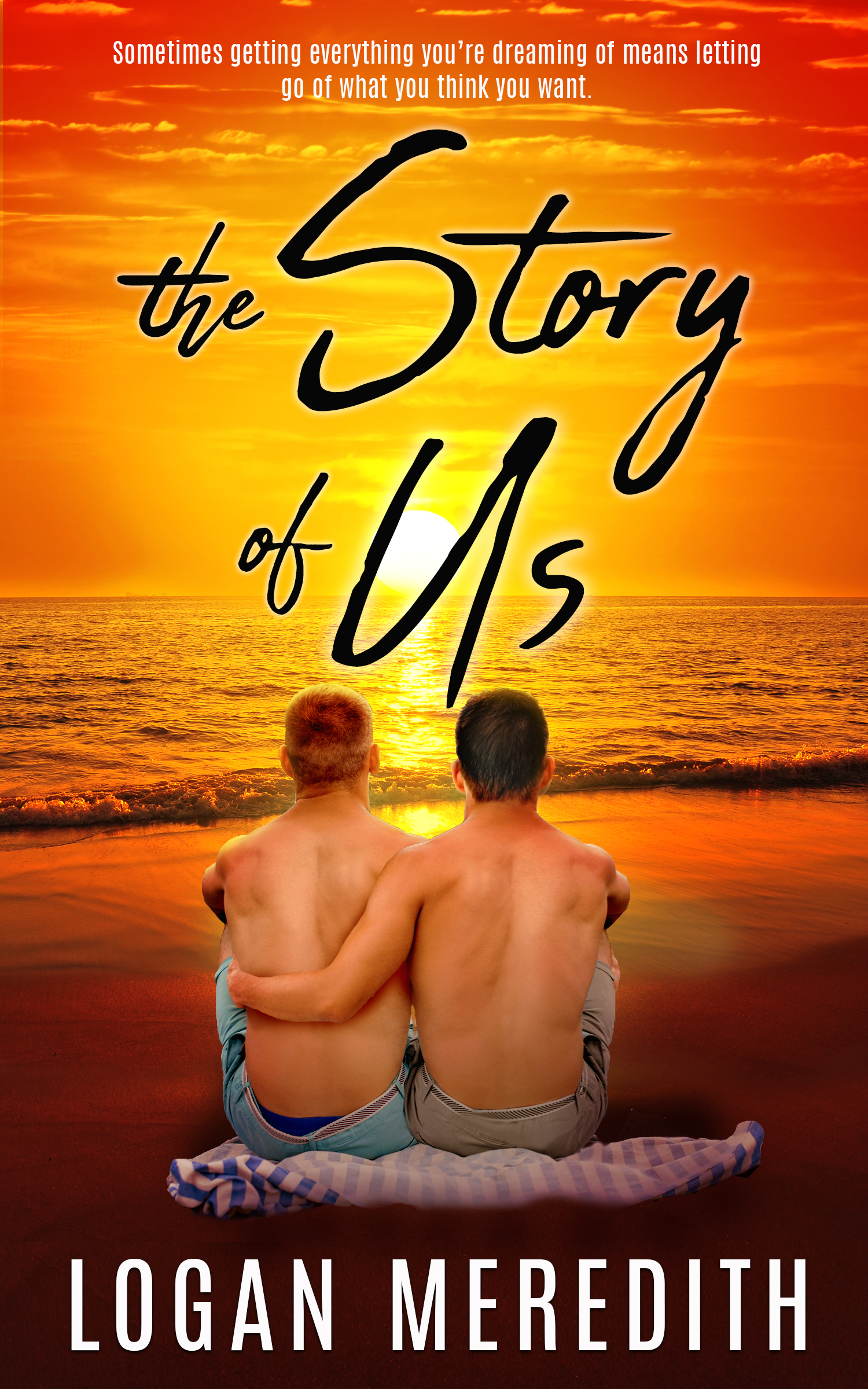 The Story of Us

Sometimes getting everything you’re dreaming of means letting go of what you think you want.

When the road gets rocky, Kyle must finally deal with Lucas’ job and his own sexual hang-ups or risk hitting a dead end. But if they can negotiate a compromise, they might just end up someplace extraordinary.

Publisher's Note: This book was previously released by Pride Publishing with a different cover.

I never stood a chance. All the ingredients for a true romantic comedy meet-cute were present and accounted for. Seriously. If Julia Roberts and Tom Hanks themselves had been in the library during our encounter, I wouldn’t have been surprised.

Let me paint the picture.

What started as a slight drizzle strengthened into a wallop of a springtime shower midway from the parking lot into the building. I had two hours between the end of my workday and my algebra midterm. My faded navy-blue sweatshirt covered my head while I powered through the pounding horizontal rain.

A revolving door marked the entrance to the main library at Simmons University. Midterms had packed the two-story building and a steady stream of students flowed in and out, keeping up a constant whirl-whishing-click sound I used to time my entrance into an open wedge. Lucas approached from the opposite direction. I kept pace, entering at the precise moment the opening became available—only so did Lucas and his oversized umbrella.

Two full-grown men both with loaded backpacks proved too much for the small space and the whirling of the door came to an abrupt halt with the stem of Lucas’ umbrella in his hand and the opened top still outside. The student in the other wedge hit the glass in front of her with a hard whack, and since I had entered our side before Lucas, I did the same. I couldn’t turn around. We were squeezed in tight. Between the hysterics behind me and the laughter from the students inside the library, I determined what had happened. I gathered we were a comical sight.

“Fuck, my umbrella is stuck,” Lucas said, laughing too hard to do much about it. I could hear him cycling through attempts to push the handle out and retract the top in. Nothing worked. The force of the door and the unamused girl trapped next to us who inexplicably kept pushing on her side wedged us in further. “Stop pushing,” Lucas hollered. “See if we can back up enough so I can free this.”

I wiggled my arms out of my backpack and turned around. The three of us coordinated our efforts to work against the natural direction of the door.

“Push it out,” I said when enough space opened to heave the umbrella outside. He did, and the girl next to us shoved the door hard enough to send Lucas and me flying into the library. I fell over my backpack and Lucas fell on top of me. His weight jammed the corner of the calculator I kept stashed in my bag into my balls.

“Fuck me.” My anguished groan echoed in the quiet confines of the library. Snickers from several students bounced back. All eyes shifted to me as I writhed, grabbed my crotch and muttered every swear word I’d ever learned and a few I invented in the moment.

Lucas scrambled off me, scarcely able to breathe. His contagious hilarity infected me and forced me to smile, despite the excruciating pain of having a TI-83 calculator smack hard against my scrotum. Through my wincing, something resembling a laugh escaped. We lay together on the library floor and recovered our breath while students who had resumed using the revolving door stepped over us into the library.

Following a stern look from the librarian, Lucas regained enough composure to stand. He offered me his hand and assisted me to my feet.

“Man, I’m so sorry. Tell me how I can make it up to you,” Lucas said, handing me my sopping wet and muddy sweatshirt from the library floor.

I took my sweatshirt and sized him up for the first time. Shorter than me by two inches, Lucas had a blond Southern California surfer boy vibe going on—shaggy hair curled on the ends fell into perfect place with the shake of his head and blue eyes roughly the color of the Pacific Ocean. And young… Oh, so young.

“You owe me something after that.” The words could have come out sexy if I had bothered to lace them with any innuendo. Instead, they came out like the grumpy old man in the Scooby-Doo cartoons. I’d essentially called him a pesky kid.

His smile yielded to a conciliatory grimace. “Sorry, sir.”

Sir? Damn if that didn’t hurt worse than being hit in the nuts. “Don’t worry about it. I’m fine. It’s not like I need my balls to take an algebra test.” Oh my God. Shut up, Kyle. What the fuck am I saying?

His gaze dropped to my pelvis and my sweatshirt-covered crotch and traced back up. A blush flushed his cheeks. “Yeah, I guess not,” he said. “I should let you study.” He entered the revolving door again, and I followed him, my mouth opened wide in case the remaining fragments of my brain wanted a chance to escape.

I noticed it had stopped raining seconds before Lucas swooped to retrieve his umbrella. He stood and once again shook his head, silently commanding all of the golden strands back to their proper place. He repeated the motion twice more when one blond wisp refused to fall in line.

With his halo back in place, he looked at me, breaking the hypnotic spell of his hair-flip ritual. Lucas’ focus reacquainted me with a level of mortification I thought reserved for puberty. Not only was I blatantly staring at him, but I also had no explanation for leaving the library we’d spent an exorbitant amount of effort to enter. I knew it, and by the bemused expression on his face, so did he.

Oh, for fuck’s sake. I turned to leave. That’s it. Walk away and pretend you’ve got somewhere else to be.

“You’re leaving?” he hollered, laughter escaping in the same breath.

Desperate for any plausible explanation, I turned toward him and stopped at the edge of the covered entrance. I opened my mouth, but only random, meaningless sounds came out. I couldn’t hide how flustered I was, and his expression told me he’d determined precisely what had caused my reaction. He checked me out again, that time with all sorts of lascivious intent, and grinned. “Don’t you need to study?”

“Um. I… Um.” I pointed and gestured but said nothing intelligible. Maybe I contracted an acute case of brain damage from my fall?

Like a lifeline, he offered his hand. “I’m Lucas.”

I stopped rambling long enough to shake it. Lucas’ satiny-smooth palm in my clammy, calloused hand fired off inappropriate urges. “Kyle,” I returned, still flustered. “I’m sorry,” I added, although I had no idea what for. Blatant ogling?

He shrugged off my apology but kept my hand in his and adjusted his mane again with another small shake of his head. “So, Kyle, would you like to go find a private enclave and…um…study with me?”

Fuck. Now that’s how you say something with innuendo. Why couldn’t I have done that earlier? “Oh. Um, sure. Yeah, I guess you owe me that.” The rest of the English language escaped me and I bobbed my head to convey my enthusiasm. Saliva pooled in my mouth and I gulped so hard my throat ached.

As I followed Lucas to the staircase, my brain seemed to catch up to what was happening, leaving me momentarily panicked. I paused. Am I really doing this? Me? The rise and fall of Lucas’ steps and the spellbinding bounce of his ass steadied my nerves, and suddenly I was poised to take the first step toward the most outrageous thing I’d ever done.

At that moment, Lucas glanced back and delivered a filthy challenge with nothing more than a smile and a wink. I missed the step and gripped the handrail to keep from falling on my ass again.

With an amused laugh, Lucas backtracked, took my arm then slid his fingers down my forearm and laced them with mine. “Careful,” he smiled and squeezed my hand.

Logan Meredith began writing as a teenager when beautiful boys started keeping her company at night. Unfortunately, the voices she heard were imaginary, and their conversations resulted in horrible insomnia. They only let her sleep when she started typing their words down. Thankfully, being awkward as hell and a head taller than anyone else in the school afforded plenty of spare time for writing.

At first, she tried to make them play with characters from her favorite television series or books. She found her lost tribe with a ravenous, crazy group of fan fiction lovers online and started sharing her stories publicly. Then something amazing happened: new characters arrived and started demanding their own stories. Only they wanted their own world to play in and they wanted to find their true loves. So between her day job and making time for her family, she tries to keep up with the demands from her beautiful men for their happily-ever-afters.

A native of San Antonio, Texas, and a graduate of the University of Texas-San Antonio, Logan is an accomplished cross-country mover having honed her skills bouncing between five states.  She currently resides in Houston, Texas. In addition to writing, she spends her time reading and re-reading her favorite books, cheering for the San Antonio Spurs, playing Words with Friends, and procrastinating pretty much everything else.

Logan is a proud member of the LGBTQA community and vocal advocate for mental health awareness suicide prevention, and equality campaigns.

Logan welcomes the chance to interact with readers.

Kyle meets Lucas when he’s a returning student to university. Their “running into each other” almost leads to sex, but Kyle walks away. Lucas is intrigued. So he pursues Kyle. Kyle cannot figur...

Share what you thought about The Story of Us and earn reward points.