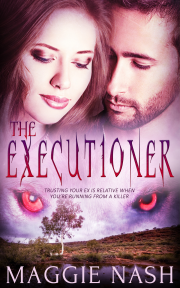 A team-building exercise at a remote location reignites the heat between former lovers Madeleine Smith and Nicholas Garabaldi. When team members start dying they must learn to trust again before they can outwit whoever is killing off the group one by one. Is this the ‘Executioner’ from the indigenous Dreamtime legend of the local Bibulmun tribe? Or is it someone closer to home?

The weather in Albany resembled the overcast conditions Madeleine Smith had left behind her in Melbourne the previous morning. Not at all what she’d expected when she’d begun her journey to the southern region of WA. Wasn’t it supposed to be hot in Western Australia? She stretched a little, arching her back as she did her best impression of a Siamese cat after a mid-afternoon nap. The sustained yawn that followed came out all by itself, reminding her of how long she’d been on the road.

Okay, so it wasn’t really that cold. If she stayed out of the wind, it wasn’t such a bad place. She looked to her left as her taxi drove through the backstreets of town and saw the most spectacular view of the ocean she’d ever seen. The rocky formations of the small cone-shaped islands were quite majestic as they jutted out of the clear blue water that lapped against pristine white sand.

It almost made up for the weather.

She shivered despite the view. Her job with Gryffin Technology was a new start for her, and she really needed to make a good impression, although she didn’t know a lot about the company as yet. Especially the mysterious CEO, who everyone called ‘Boss’. Maybe she’d find out his real name over the next few days. The summons to the special team-building adventure weekend had come as a complete surprise, especially since she was yet to commence her new role. However, her new boss’ secretary had been insistent—she was expected to participate and no excuses would be accepted. Who was she to argue? It wasn’t every day you got an all-expenses-paid adventure holiday in the wilderness of Western Australia. Besides, after her summons, she’d lashed out and bought a wardrobe of new desert-proof clothes. It wasn’t as if she’d get any wear out of them living in Melbourne. She closed her eyes, imagining herself in khaki shorts and a black T-shirt with her hiking boots, walking into the swish office block in the Paris end of Collins Street.

This was a short, but good story about lost love and finding it again under extreme circumstances.

I enjoyed the suspenseful part of the storyline. When the perpetrator of the events was rev...

This is a fast-paced story that nevertheless manages to tell the complete story and give you a hint of the mysterious too. Well written, with no editing or grammatical errors that I found, this makes...

Share what you thought about The Executioner and earn reward points.