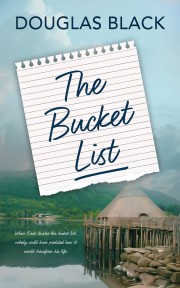 When Kade tackles the bucket list his friends created for him after he’s been dumped, nobody could have predicted how it would transform his life.

When Kade Doherty’s long-term partner walks out on him, he expects sympathy from his friends. Instead, fearing Kade’s life has been stagnating, his friends make him a bucket list. Kade isn’t convinced a list of outlandish leisure pursuits—some of which he’s never even heard of—is going to do much good, but to keep the peace, he decides to play along.

Unbeknownst to Kade or his friends, doing so sets Kade on a collision course with Blake. Blake may not have directly featured on Kade’s bucket list, but his Australian accent and surfer-boy looks have featured in enough of Kade’s sexual fantasies over the years to convince Kade to keep following this new, unpredictable path.

To Kade’s surprise and delight, it is a path that brings him a taste of happiness he didn’t know he was missing—a taste that threatens to be stolen from him when his ex makes an unwelcome return to the scene. Kade might have been having the time of his life with Blake, but he hasn’t been completely honest about his recently ended relationship or the origins of his bucket list.

Will Kade be able to convince him to stick around when Blake learns the truth?

Publisher's Note: This book was previously released elsewhere. It has been revised and reedited for release with Pride Publishing.

Kade looked up at the unfamiliar façade of the building in front of him. If he hadn’t just checked his location for the third time using both the sat-nav on his phone and the one in his car, he would have sworn he must have taken a wrong turn when he’d reached the unfamiliar streets of Glasgow’s East End.

Unlike the supermarket he normally frequented, this one had no branding or signage to speak of. There were no garish colors and definitely no cheesy logos. If the market had an official name, the owners clearly didn’t think it was worth sharing with their customers.

The building looked like a windowless warehouse, and the car park, devoid of neatly painted grid lines and pointless shrubbery, was just a gravel-covered, pothole-ridden piece of ground hemmed in by a giant metal fence. If it hadn’t been for the steady stream of people coming and going through the single-door entrance, Kade wouldn’t have known if the store was open or closed.

He sighed and leaned against the bonnet of his car. All he really wanted to do was get back behind the wheel and drive back to what was familiar. The temptation was almost overwhelming. It wasn’t as if there hadn’t been enough changes and uncertainties to deal with recently without dragging the weekly shopping into the mix. He pulled out his phone and scrolled until he found Ian’s number. His friend answered on the second ring.

“I’m standing outside an Asian supermarket. Are you happy now?”

“That depends,” Ian said. “Are you actually going to go inside or are you just planning on standing in the car park, biting your bottom lip and looking at your feet?”

Kade looked up from his boots and removed the phone from his ear momentarily so he could stare at it instead. He heard Ian’s laughter through the handset.

“Fuck you very much,” Kade said under his breath when he put the phone back to his ear.

“And you. I’ll see you tonight. I’m impressed, you know. Doing two things outside of your comfort zone in one day? Hell, the council must be pumping chemicals into the water again.”

“Yeah, yeah. Very original. You’re a funny guy.” Ian was still laughing when Kade rang off and slipped his phone back into his pocket.

Ian’s jokes weren’t funny to Kade at the moment and his behavior had nothing to do with too much fluoride in the city’s water supply, as Ian well knew. Instead, it had everything to do with that stupid, bloody list.

The bucket list. His bucket list. Only it wasn’t really his at all, because Kade hadn’t had any say in whether or not he needed a bucket list to begin with, let alone what he wanted on it. Ian and his boyfriend, Paul, had drawn it up the morning after Kade had shown up on Ian’s doorstep, shouting, ranting and crying because Niall had left.

Niall was supposed to have been it for Kade. They’d met at Glasgow University and been a perfectly sensible match. They’d enjoyed similar childhoods, held the same values and political opinions and had strong work ethics. When their friends had been in bar at the student union, doing their best to annihilate their livers, Kade and Niall had been in the library, putting in long hours most weeknights and over weekends.

They had both graduated with honors on the same day, and just a few years later, they were working for the same accountancy firm in the city, making enough money to afford a nice flat in Glasgow’s West End and two cars. Hell, they’d even had a goldfish.

In short, they had done things properly. They might not have been living the most exciting, adrenaline-fueled lives imaginable, but they had been comfortable and secure, and they’d managed to get through eight years together without ever encountering a single bump in the road—not until Niall had walked through the door three weeks earlier to announce that the relationship wasn’t working for him anymore then promptly walking back out.

And, somehow, that horrible night, when his life had been turned upside down and the future torn away from him, led to Kade standing outside an Asian supermarket at eleven-thirty on a Saturday morning.

Ian had come up with the bucket list to help Kade to start living a more interesting, exciting life. ‘Shop in an Asian supermarket’ had been at the top of page two. Kade thought excitement was rather a lot to expect from a place that sold food, but it had been one of the more doable items compared with, say, ‘Go lava chasing’, so Kade had decided to tick it off. He wasn’t completely committed to the idea of the bucket list—in fact, not at all—but panicking over it was helping take his mind off Niall.

Kade sighed and headed for the entrance before he could change his mind. ‘Weird’ didn’t come close to describing this new approach to living. ‘Bonkers’ was closer to the mark.

Douglas Black was born and raised in bonnie Scotland. He started writing M/M erotica during his time at university when he discovered that selling adult stories to magazines vastly improved his chances of eating something other than pasta or beans on toast for dinner.

Douglas returned to the genre in 2012 with the aim of writing engaging, contemporary, sexy-as-hell stories for readers' enjoyment. He always aims to please.

Welcome to your fantasy.