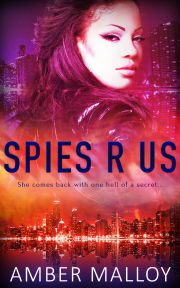 Book 1 in the Spies R Us series

Vann is a single dad, but his routine is blown apart when his long-lost wife comes back with one hell of a secret…

The top African American spy, Eden Morgan, is living the good life… Days away from permanently leaving the spy game, Eden’s plan of being a stay-at-home mom goes up in smoke. Number one on the Russian hit list, Eden must leave her beautiful family and figure out who’s trying to kill her. Unfortunately, her agency burns her status, so what should have been only weeks on the run turns into years. Instead of accepting her fate, Eden claws her way back from the dead to save the next people on the Russian’s hit list—thanks to her husband’s greedy family—her kids. However, after three years missing, her homecoming isn’t well received. She finds that her awesome husband has moved on with a perky schoolteacher, not to mention her twins barely remember her. With a good idea who’s behind the plot to kill them, Eden must navigate carpool lanes, bitchy moms and one angry, sexy husband.

Vann Morgan is charmed. One gorgeous wife and twins, and the most difficult thing in his life was reconstruction of his Chicago brownstone. Unfortunately everything changes when his lovely wife disappears but he’s the only one who seems to care. After some years, Vann makes a new normal as a single dad, but his routine is blown apart when his long-lost wife comes back. Unable to trust Eden with his heart, he soon uncovers that everything surrounding her disappearance is his fault.

Spring was directly around the corner, which would conclude the twins’ first year of preschool.

Vann idled at the kids’ school in the carpool lane at the kid’s school. He waited for the kids with Dylan Hansen, his best friend, in the passenger seat. Dylan had been a one-time silent partner in Vann’s environmental investment firm, Good and Green. However, after this last quarter, Vann had been able to buy him out.

“They’re late,” Vann said, checking the clock on the pickup’s dashboard. The little ones always got released first.

“Why don’t you go check on them? That group of women over there are gobbling me up with their eyes, and it’s making me feel naked.”

Dylan nodded toward the housewife gang and joked. “Unlike you, I’m not damaged goods. A runaway wife and two kids. I, on the other hand, am a shiny nugget of gold.” Dylan chuckled as he pointed at himself. “Single and divorced moms can sniff me out a mile away. I think it’s a sixth sense they acquire the minute they sign their names on the divorce papers.”

Vann didn’t doubt what Dylan said. The women were oftentimes overly friendly. He always wondered if it had to do with his semi-single status, but on the other hand, someone baggage free like Dylan would be prime beef.

“If you’d just divorce Eden, then you too could be held in high regard, such as I am.” Dylan ran his hand through his blond hair and polished his fingers on his shirt. Friends since college, they were often mistaken for brothers. Yet ever since Vann had let his hair grow past his shoulders, Dylan appeared the more desirable of the two.

The mandatory uniform at Vann’s company ended with jeans and began with a T-shirt—preferably clean, but that requirement wasn’t always met. Once he’d shed his jacket and tie, the fairer sex had begun to migrate toward men with a more grown-up look. Jobless or homeless seemed to be the popular opinion about his life. Apparently neither of those options qualified him as good husband material, though they still seemed to look at him hungrily.

“I’m going to wait the five years to declare her dead. I think it would be easier for the kids.” He didn’t like to talk about Eden, but he knew Dylan meant well. To avoid further conversation on the subject, he grabbed the door handle. “To save you from the throngs of your admirers, I’m going to get the kids.”

“Hey, I didn’t mean to bring down the mood. I just want better for you, man. It’s been too long.”

Vann nodded. “No harm done. Let me get the kids. Then we can celebrate your return to the Windy City in high style.”

“Of course not. We’re going to Dave and Buster’s.”

Ivy League stuffy, Dylan was a snob through and through. “I hate that fuc—”

He slammed the truck’s door on his friend’s complaints and took a spot in the patch of dried grass uncovered from the freshly melting snow.

With his Starbucks Grande latte in hand, he hoped none of the moms in his kid’s class noticed him.

“Hi there, stranger! We haven’t seen you in forever.”

Crap! Fighting his instinct to run, he gave the yoga mom a lame smile and tried to place the peppy woman’s face. At six foot two, he was nearly a foot taller than her. He had to outweigh her by at least seventy-five pounds.

“I’m uh…busy. Work.” He choked on his coffee drink when she slugged him on the arm.

“Where have you being hiding, you silly goose?”

Head of his own company, and he couldn’t believe one PTA mom made him this nervous. He attributed his uneasiness to the manic gleam that shone in her eyes every time they spoke.

After the first week of preschool, Vann had realized single moms were natural predators and he didn’t stand a chance against them. From that point on, Marta’d had to pick up the kids. Unfortunately her chipped tooth had forced him out into the wild today. To say he was guarded was an understatement.

“We need a strong, strapping fella like yourself for the spring pageant.”

“Well, my schedule is kind of full—”

“I won’t take no for an answer,” the aggressive woman pushed. “We’re meeting at Mary’s at four p.m.” She gestured at a group of moms who waved back. “Why don’t you join us?”

“You know where to find me,” she hollered at his back before he could put a good distance between them.

A perky little blonde he had never seen before walked between his kids, holding their hands.

Last Vann knew, the boys’ teacher hadn’t been this young or cute. It didn’t pay to dodge the PTA, he figured. “What happened to Ms. Lori?”

“Her mother had a nasty fall. I’m here until she gets back.”

Tess smiled sweetly at him as the silence turned awkward. Vann had been alone for some time and he didn’t want to get categorized as one of those pervy dads. However, the tips of her nipples pushing against the fabric of her sweater were hard not to notice.

“Huh? Oh!” A flush of red crept up her neck. “Sorry. I wanted to tell you that Miles got upset in class today.”

“Are you all right, buddy?” He glanced down at his shy twin, but the kid wouldn’t look up from his little boots.

“Yeah, I don’t know what happened. The class was sharing what their parents did for a living. It was so cute. Louis said you were a green giant.” Tess touched his arm with a laugh. “And then when it was time for Miles to talk about his mom, he started to cry.”

Vann felt bad. The more sensitive of his two kids, Miles always had a hard time with the no-mom thing.

“My company finds the funding for green start-ups.” He tried to clarify the interworking of his three year old’s mind. “And my wife is out of the picture.” Used to questions about Eden, Vann kept his answer short.

No one wanted to hear that one day she’d taken the boys to the doctor with the nanny but she’d never come back, which was the new version of Dad went out for cigarettes.

Tess’ smile slipped into that familiar expression of pity he’d come to expect, but her recovery was better than most. “Well, I certainly didn’t think you were a giant, and your job explains the…” She nodded toward his clothes before her words quickly died in her throat. “Oh God! I’m sorry.” When she covered her mouth, her blonde hair swung back and forth as she shook her head. “I’m such a goof.”

“It’s okay.” He laughed at her reaction to his worn jeans, plaid shirt and vest. “My job mostly entails places with lots of dirt then coming home to roll around with two three-year-olds.” He shrugged. “A suit doesn’t make much sense.”

“No harm done.” He laughed again, amused by her embarrassment.

“Well, I have to get back before the head hens scratch my eyes out.”

Vann took a glimpse over his shoulder. The mom herd quickly turned away, pretending to be in a deep conversation.

“Single dad with all his teeth… Throw in a horn and just call me a unicorn,” he joked. “Besides, you should probably get in there before you get any colder.”

Tess followed his eyes down her sweater. The tinkle of her laughter told him she wasn’t offended by his observation. “No wonder they’re shooting daggers at me,” she hiccupped. Vann found her innocence refreshing.

“I want you to take care, Miles,” she told the three year old, patting the little boy’s arm. “It was nice meeting you, Mr. Morgan.” She opened the door and shyly smiled at him over her shoulder.

“Okay.” She giggled once more before she went inside the school.

Vann guided them through the thick group of older kids who searched for their rides home. “So what do you guys think of your new teacher?”

“I like her,” Louis told him. “You should ask her to come over to play.”

His only reply was a shrug. Vann wasn’t sure how to interpret that. His older twin could be closed off more times than not.

“Let’s go home and watch a movie.” Vann ruffled Louis’ curly head of hair. “Unless Miles is too upset?”

“Great, that means were all okay,” he told his boys.

Share what you thought about Spies R Us and earn reward points.

What male secret squirrel comes to mind, when thinking about real life spies? Ian Flemings' James Bond most likely is the first one to pop up. A fictional character created from the real-life exploits of Sidney Reilly. Male fictional spies are easy, male real-life spies are harder-oh, and Paul Revere doesn't count. Now, flip the scenario for women. I honestly draw a blank for the fictional, but in real life the list is long.

Other books in the Spies R Us seriesView Series Page