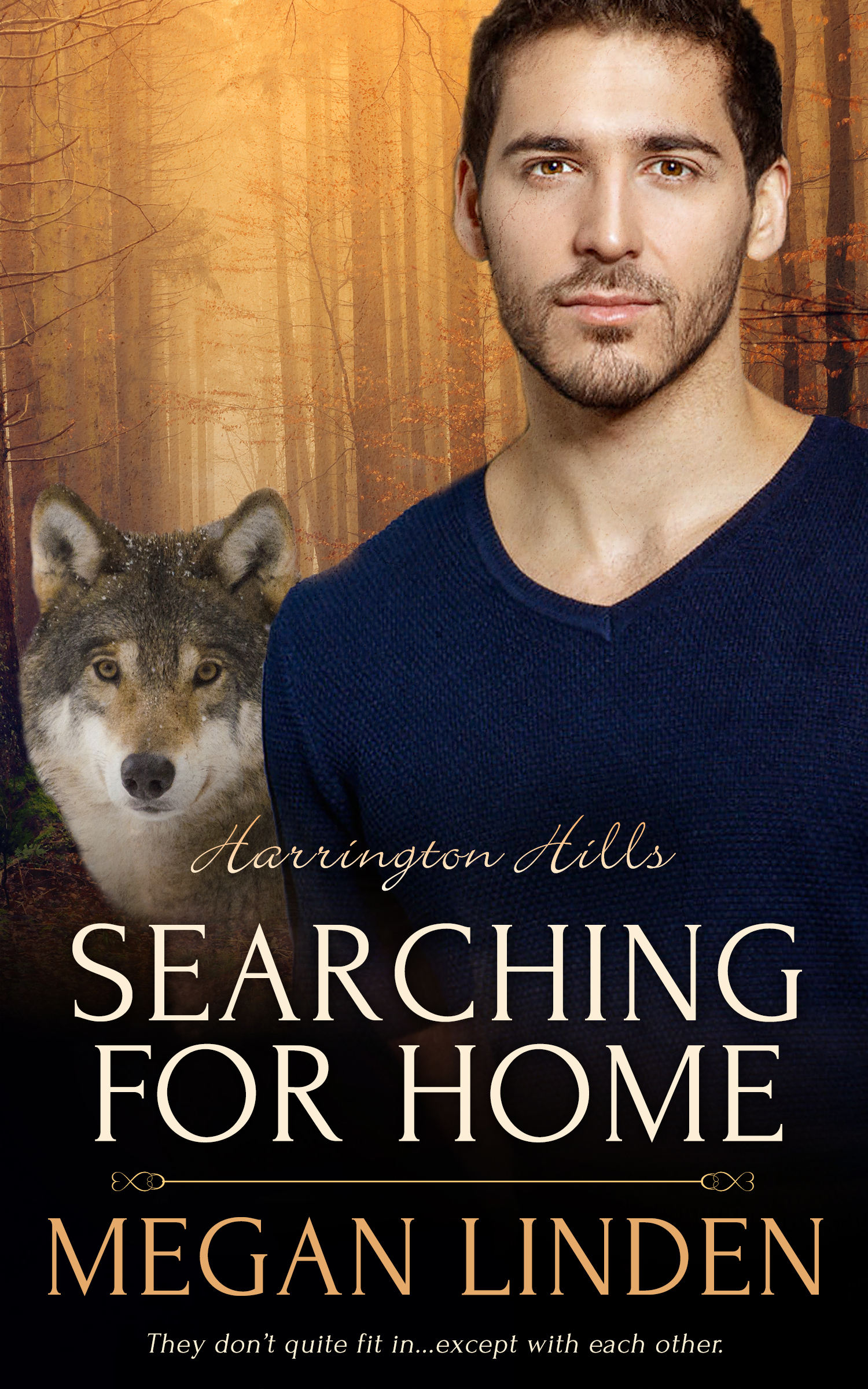 Book 5 in the Harrington Hills series

Two men who don’t quite fit in have a chance to find an anchor in an unusual place—each other.

Patrick Donnelly was cast out from his pack after admitting to his father—his Alpha—that he is gay. Now he’s trying to start over in Harrington Hills, but he is struggling, not only with the new power balance but also with his own demons.

Ollie Tomilson had gotten used to being the odd one out—a kid in the system, a lone human in the werewolf pack and a man who is always just temporarily visiting in a town where people put down deep roots.

While Patrick and Ollie seem different in many ways, what unites them is that neither fits into the Harrington Hills mold. But maybe—just maybe—they can find what they are searching for in each other.

Reader advisory: This book is best read as part of a series but can be enjoyed as a standalone.

For a Saturday night, the club didn’t seem to be crowded, but Patrick reminded himself that he couldn’t compare a club in a small town like Linwood to the clubs he remembered from San Francisco. He should be happy he’d had no problem finding the empty seat at the side corner of the bar, away from the bigger and louder groups that seemed ready to party.

Patrick wanted to take a break from his life. A few beers and a place where nobody knew him or looked at him too closely unless they wanted to hook up—that was his entire plan for the night.

It had been two months since he’d arrived in Harrington Hills hoping for a new pack, a new place and a new beginning. And, for the most part, it was good. Patrick liked the area, he liked his house, and with Adrian, his best friend, deciding to stay in Hills as well, he also had someone already there, right from the start.

He liked his new Alpha, too, even if she’d seen right through him when they’d first met.

She’d known who he was as soon as he’d introduced himself, which—in hindsight—he should have expected. It was a part of the Alpha’s job to keep a close watch on any changes in other packs’ leadership structure, after all. He’d only been taken by surprise because he’d thought his father and former Alpha would try to keep what had happened under wraps for a while longer.

It had probably been easy for her to guess why Patrick had left—been thrown out, but she probably didn’t know that, couldn’t be sure and he wasn’t telling—when he’d turned up halfway across the country wanting to join the most progressive pack in the States, one with a lesbian couple at the top of the food chain.

She thankfully hadn’t asked too many questions, but he couldn’t say the same about the rest of the Harrington Pack. Wherever he went, he could feel people watching him. The looks had been wary at first, when all they’d known was that Patrick was the outsider who’d gotten into a beef with one of the senior pack members about an hour after arriving in town. But when the news had spread that he was staying in Hills for good, people had grown curious and locals had started to come up to him to learn more about who he was.

That seemed like something that should have an easy answer, but it was anything but.

Patrick took a big gulp of his beer to swallow down his initial reaction, the tension that burned in the back of his throat as his wolf chaffed inside him. His instincts hadn’t caught up yet, hadn’t adapted to his…change in circumstances. Having to defer to Taylor was a natural struggle.

Suck it up, he told himself yet again. Taylor was nothing if not courteous toward him. Patrick figured that Alpha Harrington must have told her son who Patrick was, since Taylor had been giving him a wide berth, as much as possible without raising suspicion. With Patrick doing the same, they’d had almost no contact. That made the situation difficult for his wolf, who was struggling to accept the current situation, but it was better in general. At some point, Patrick would get used to Taylor just as he was getting used to everything else. He simply needed some time and, ideally, some space, too.

That need for space was why he was in this particular bar tonight. Linwood was bigger than Harrington Hills and a perfect distance, too—close enough for Patrick to drive there and back for one evening but far enough to get a break from people he saw on a daily basis.

He just had to stop thinking about them first.

He took another gulp of beer and looked around the club. He seemed to be the only werewolf there right now. Most people were in the room on the other side of the bar, where the music was louder and vibrating off the walls. He could see some of them going in and out, dancing or just moving to the music as they walked toward the bar for another drink. Patrick caught quite a few of them watching him, but no one held his interest for more than a second, enough for a once-over and a ’maybe later’ dismissal.

It wasn’t like he didn’t want to have sex. It had been too damn long since he’d last gotten laid, and even a blow job in the back alley would be a nice change. But he hadn’t cared to make an effort so far. Sitting at the bar with his bottle seemed like a good enough plan for the evening.

Then the kitchen door a few feet from his stool slammed open and in walked a man with a mop of curly hair and a grin wide enough to split his face in half. A tight T-shirt stretched over his shoulders, but Patrick’s attention was drawn to his forearms and hands with long fingers that made the blood in Patrick’s veins pump faster. Fuck. He was ready to make that effort now.

But the man wasn’t even looking in his direction.

“Rejoice, my friends. Ollie is here!” he shouted as he slipped below the bar and came up on the other side where the red-haired bartender caught him in a quick hug.

“Thank fuck you are,” the barman told the new arrival—Ollie—before taking off the black apron from around his waist and grabbing his backpack from under the bar. “Catch up with you later, okay?”

“Sure, sure…go.” Ollie clapped him on the back with a nod. “See you tomorrow.”

Patrick didn’t care about the guy who was leaving, since he was too busy watching the newcomer. Ollie turned his back to him and greeted the bartender on the other end of the bar as he put on his own apron to cover his tight black jeans. He took off the elastic band from around his wrist and put it on his head, tugging his hair away from his face.

Patrick wanted to lick and suck the uncovered skin of Ollie’s wrist.

He finished his beer instead.

A moment later, as if he had some kind of bartender-radar for a client who had finished his drink, Ollie turned to him, eyes widening as their gazes met. The smile that followed after a few seconds was coy, but his initial reaction was strong enough for Patrick to pick up in a bar full of other scents.

The man wanted Patrick right back.

“Hi, there,” Ollie said, wandering closer. He rested his hands on his side of the bar, and while he didn’t lean in too far, he still managed to somehow narrow the space between them. “Can I get you another round of this, or…?” The pause and the question could have been innocent, but the way Ollie’s gaze dropped to Patrick’s lips definitely wasn’t.

He watched a corner of Ollie’s mouth arch into a lazy smile, and fuck if Patrick’s body didn’t respond to that like a starving man to a delicious meal. Maybe the recent celibacy had bothered him more than he’d thought after all, if a simple smile—no matter how hot—could make him feel like this.

“Very well,” Ollie said, pushing back on his hands and taking a step back. “One beer, coming up. And if you need anything else, I’m here all night long.”

Patrick gave him a smile of his own, and from the looks of it, Ollie really liked it. “Great. I’m in no hurry.”

Ollie turned to presumably grab him that next beer and Patrick’s gaze fell to the man’s ass.

Oh yeah. He had no better place to be tonight.

Megan is one of those people who dreamed of being a writer since they were a little kid and then didn’t do anything about it for years. Then as a teenager she was introduced to fandom and… well. She fell head first into it and never looked back. At some point she decided to try writing her own characters in her own stories. And that’s where she is today.

When she's not writing, Megan works as a psychologist and continues to learn the hard way that she can’t give all her clients their happy ending (she truly believes everyone can save themselves, though). That’s why she makes sure to give it to her characters, always.

She loves TV shows, books, fanworks and pizza (not necessarily in that order). But there’s nothing like getting messages from readers who enjoy her stories, so if you’re not sure it’s okay to contact her—yes, it is.

Share what you thought about Searching for Home and earn reward points.

Other books in the Harrington Hills seriesView Series Page