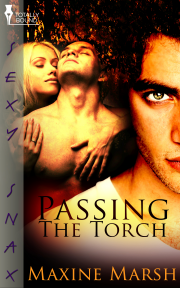 Calla faces an avalanche of grief and confusion when she finds out her husband Owen is dying. Owen's last wish is that she and his brother, Ash, be together when he's gone. The only problem is that Ash is not happy about the idea, but that doesn't stop Owen from bringing them on one last sentimental camping trip, one that is immediately filled with intense longing, fear and denial.

Out in the forest, where past and present collide, where far off noises and active imaginations chill the spine, Owen intends to teach Ash how to be intimate with his wife.

Grief, strong wills and insecurities clash in the forest, where Ash learns just how deep the sexual connection between Owen and Calla is, and just how much he can relate. Throughout it all, Calla must find a way to bring the two brothers together to find resolution about their past, and to find resolution to her own doubts about the future.

About a week before we went to his doctor’s appointment, I dreamed that Owen tried to kill me. We were at our favourite camping spot in the woods, a place that no one else seemed to know about. In my dream, the towering brown trees of the forest were even denser than in reality. They were so huge I thought maybe they were real giants, giants in slumber, in hibernation, and we were only the fleas at their feet. The ground wasn’t brown and leaf-covered as it normally was—instead, bright green moss grew everywhere, full and fuzzy, a living, spongy mass. I realised that I was barefoot. The moss seemed to grow fuller and fuller, creeping in all directions before my eyes.

Owen walked by my side, quiet, looking down at the ground, too. His skin was so pale, paler than in reality, where normally he had a golden tinge to him. But in my dream he was as pale as a ghost, and I thought I could see through his skin, see his veins running erratically here and there, turquoise lines chug-chug-chugging the blood through his body. I somehow knew that the green veins I observed were clogged with slime, passing through his body, making him sluggish and sappy in his movements.

We came to the stream. It was really too big to call a stream, but I preferred the word to ‘creek’, which I found creepy, and it was too small to call a river. The clear, icy water ran past, flowing steadily over the smoothed stones that populated the riverbed and bank. In the summer time you could see the colour in the stones when the sunlight hit them, but I must have been dreaming it was wintertime or early spring, because the stones were simply grey, round bits of grey that reflected no light, making the stream seem much deeper than it actually was. Making it seem dangerous. I stood with my toes against the flow until it felt like icy little needles were pricking at them.

Owen stood behind me. I felt his hands come around my waist then move up to my breasts. I was naked, too, I realised. His touch was frigid instead of warm like it normally was. His fingers found my nipples. I gasped and my body shuddered. His pale fingertips pinched them until biting slivers of pain shot into my body. I gasped again. He slowly opened and closed the space between his forefinger and thumb, squeezing then releasing the tips, and the waves of delicious pangs in my pussy undulated accordingly with each contraction. He seemed to be ignoring the whimpers of pain I let out each time he pinched my flesh, or, rather, maybe the pathetic noises spurred him on. Soon my nipples were burning and reddened. Still he continued.

I grew afraid of him. I had never been afraid of him, never in all our playing, in all the nights we’d spent hours pushing each other further and further towards our weaknesses, even as he had held every ounce of my sanity in his hands, I had never doubted my safety with him, never doubted his intentions. But now I felt a ghoul had invaded his body, and it was the ghoul who now stood behind me, relentlessly tormenting my sensitive flesh. My strength gave out and I fell to my knees.

Before I could fully understand or maybe even admit to myself that this wasn’t my husband but an embodiment of something wrong, a manifestation of something terrible and indefinable, I found myself submerged. Suddenly I was holding my breath as the icy currents pulled my hair over my face, the roar of white noise and rocks moving against one another, bubbles escaping my nostrils—I was deafened. The ghoul had a hand in my hair and was holding my head in the stream.

I squealed when it put its cock into me, and more of the precious air I still had in my lungs escaped. I tried to think of some way to break free as the length of its hardness penetrated me up to the hilt, its hips pressing hard and cold against my ass. All my thoughts ceased then, and a burning, conspicuous in the surrounding chill, almost took me so far from my panic I could have drowned happily. My knees crushed into the stones beneath them, and the ghoul withdrew then plunged into my body again. As its cock invaded me I was filled with a blissful sort of insanity. I felt lost to myself. My body gave in to the thing, burned around it, desiring it more than it wanted another breath.

I woke up with a gasp, as though I had finally pulled my head out of the stream. The juices of my desperation seeped from between my legs. I flung my arms out into the darkness before I totally regained my senses.

Maxine resides in very hot and very wet southern Florida. Her childbots and hubinator keep her busy most of the time, but she steals away to write as often as possible.

Her erotica has been featured by Total-E-Bound, Xcite Books, Cleis Press, Vagabondage Press and Oysters and Chocolate.

Share what you thought about Passing The Torch and earn reward points.