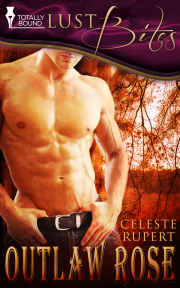 Rose would do whatever was necessary to get the gold back from the bank robbers. Enjoying it was an unexpected bonus.

Rose had a plan.

After all her planning and hard work, she was about to hit the payoff—until the bank was robbed, the gold stolen right out from under her nose. Rose wasn't about to give up without a fight, but catching up with the outlaws was the easy part.

When Tucker finds the little bank teller tailing them, he needs to keep her from running to the posse, and her proposal sounds like way more fun than what he had in mind. But in this band of outlaws, they split everything three ways—he's going to have to learn to share.

What Rose had thought was a straightforward plan quickly becomes more complicated. Maybe these law breakers can work together…in more ways than one.

A branch cracked. Rose crouched down in the shadow of a nearby bush and hoped her dark dress and the overcast night would be enough to hide her from view. The footsteps grew nearer and she held her breath. Her heart pounded so loud in her ears that she was afraid it would lead him straight to her. She tried to calm down.

It was quiet. She strained her ears for any sign he was coming closer. The silence pressed in on her as she squinted through the darkness, searching for movement. There was nothing but the faint rustle of nearby leaves in the night breeze. She breathed out a sigh.

She sensed the movement a split second before she felt the hand close over her arm. She fought with all her strength, jerking backwards to try to break his grip, until the loud, metallic click of a hammer being drawn back echoed through the night. She froze.

"That’s better." His voice was a low growl and she felt the steel barrel of his pistol against her cheek. He lifted her to her toes, bringing his face down close to hers. She could smell the coffee on his breath, then his face was close enough to see clearly. His strong jaw and full lips had been hidden by the mask the day before, but she remembered his eyes, which registered surprise as he recognised her. "You! You’re that little snip of a bank teller." He pressed the gun harder into the soft skin of her face. "What the hell are you doing sneaking around our camp?"

"The posse took off to the south, thinking you’d head for Mexico. I..." She hesitated, until the pistol jerked again. "I took a chance."

"Stupid of you. I can’t let you go now, or you’ll just run to the sheriff." He twisted, and she realised he was looking around him. "I don’t like killing women, but you’ve put me in a bad spot."

"No!" Her heart pounded in her ears.

"No?" He leaned over her menacingly. "Do you have another suggestion? We’ve made plans for that gold, and I don’t plan to let some pretty little bank teller get me hanged before I get around to spending it."

He gave her a shake, bouncing her off his broad chest, his hand like steel on her arm.

"I’ll make it worth your while."

He froze and she collided with him again. "What?" he said.

She relaxed against him, trailing a trembling hand across his chest. She heard him suck in his breath, then jumped when his hand covered hers, holding it still.

Celeste Rupert lives in the shadow of the Rocky Mountains and (other than the lack of indoor plumbing) would love to live in the Old West. As time travel hasn't yet been invented, she lives in the era through her characters.

Share what you thought about Outlaw Rose and earn reward points.