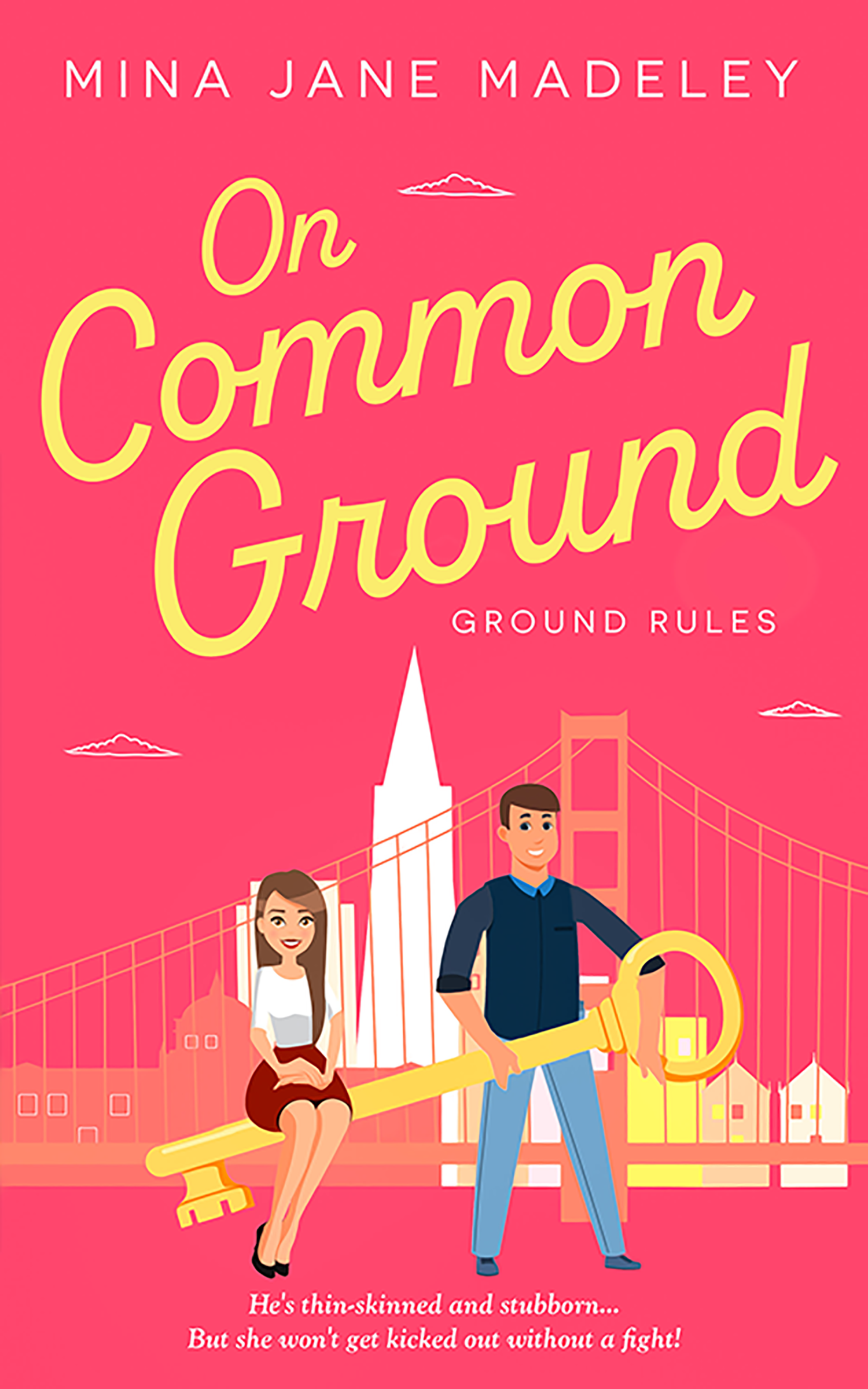 Book 1 in the Ground Rules series

He’s thin-skinned and stubborn… But she won’t get kicked out without a fight!

After six years in Paris, thirty-four-year-old investment banker Adrian Hensley returns to San Francisco, engagement broken and ego wounded. His hope for some peaceful solitude is shattered when he finds a stranger subletting his home without his knowledge. The pretty brunette would be the embodiment of his sexy secretary fantasy, if it weren’t for her feisty temper and her tendency to get him worked up…in more ways than one.

Eva Duncan, a legal secretary with a knack for finance, makes a point of remaining independent. No man will ever decide her fate—not again. When Adrian comes barging into her quiet life, old childhood wounds reopen, and she won’t get kicked out of her home. At least, not without a fight. Yet, standing her ground proves to be tricky for Eva in front of a handsome, too-often-half-naked Adrian.

Between her tenacity and his arrogant façade, Eva and Adrian jump from one misunderstanding to the next, making their forced cohabitation as explosive as their attraction. How long will it take for them to learn that the ‘right decisions’ are not always those which lead to happiness?

Slouched in the back seat of a cab, I rub a hand over my two-day stubble as the driver parks, the streetlamps almost blinding my sleepy eyes. I step out into the chilly wind and retrieve from the trunk the three bags containing everything that’s left of my life in Paris. It’s all I’ll need for a fresh start. The rest would only be a reminder of Pauline’s betrayal.

A surge of anger engulfs me again, not as strongly as it has the past five weeks, but despite putting physical distance between us, the disgust, resentment and sense of failure still weigh heavily on my shoulders.

I stretch my aching muscles, stiff as if I’ve ridden planes and taxis for an entire month. Even in the foggy darkness, my building hasn’t changed much since I last lived in San Francisco—four stories high on a steep hill, with typical bay windows.

Inside the lobby and up the stairs, my surroundings still feel familiar, and so does the cold metal of my key in my hand. I’ve always clung to it, even after moving across the world. Deep down, part of me knew I’d come back. I’d planned to. Yet, not once did I imagine my return in these circumstances—alone.

I reach for the lock but hesitate. Madison lives here now, and I shouldn’t barge in. I knock on the door once, impatient to surprise my little sister—twice, the anxiety creeping its way back into my gut. How will Madison react after all this time? I hope she’ll be happy to see me. The impromptu visit seemed a good idea when I planned a one-week stay for my job interview. The intended short trip has turned into a permanent move back, and Madison might just be upset with me landing on her doorstep when I haven’t even called in months.

Another apartment door unlocks behind me, and a young man comes out, dressed in black jeans and a hoodie, his long blond hair poking out of a beanie. With the shadow of a beard on his jaw and his six-foot height, I almost don’t recognize him.

His eyes widen. “Adrian? Great to see you, dude.”

I drop my bags to shake his hand. “You, too. It’s been a while.” My gaze sweeps over him from head to toe.

The last time we crossed paths in this hallway, he was still a teen who looked up at me as if I were a rock star, tried to sneak in when I hosted parties and spied on every woman who left in the early mornings. A lifetime ago, it seems. The past few years have turned him into a man, and me into a boring adult.

River nods toward my front door. “Are you visiting?”

“Moving back, actually.” My voice sounds serene, as if uttering the words aloud marks the start of my new life. “I knocked, but Madison’s not here. Do you know when she’ll be home?”

River pauses, one eyebrow cocked. “Dude… Madison won’t be here anytime soon.” He blows out a small laugh, cut off by his phone buzzing in his hand. “Gotta run, but let’s catch up, all right?” He walks down the stairs and out of the building before I can ask him to clarify his cryptic words.

Showing up unannounced wasn’t the brightest idea, but after months exchanging only rare and impersonal texts with Madison, the fallout from my failed engagement isn’t a topic I wanted to discuss over the phone.

I knock a third time, just in case. The key prickles my palm. I’d hoped Madison would be home this late on a Thursday. Wherever she is, I can’t wait in front of the door for however long it’ll take her to come back.

I call out with the door half-opened. “Madison?” The fatigue in my voice echoes in the silence. No answer.

The living room has changed. A flowery fragrance floats in the air. Apart from the furniture, each trinket and piece of decor is different from what I left behind. In the dim glow of the standing lamp, wherever my eyes linger, the light touches of gold and soft blue turn my apartment into a stranger’s place.

The shimmering night view of the bay through the windows, still as staggering, comforts me. I take in a deep breath and bask in that sentiment. I’m home.

My limbs are numb from hours of travel, and my eyes drift closed. The urge to lie down is hard to resist, but if I cave, sleep will overtake me in seconds. A shower seems essential at this point.

Dropping my bags by the guest room door—unpacking postponed until tomorrow—I rehash the carefully chosen words to explain my return without mentioning the humiliating reason.

Pauline and I are over. So is my life in France.

Simple enough. No reason to share the sordid details that led to our breakup.

Madison will need to move out of my apartment. I can’t keep lending it to her. I won’t stand sharing it, not even with my sister. Finding some peace, alone, is the first step to getting my life back on track.

Just like the rest of my apartment, the bathroom is different. Dozens of girl products cover the countertop, all arranged by size. I place my toiletry bag next to the sink and dig for my shower gel.

My fingers brush the pack of condoms. A bitter chuckle escapes me. A one-night stand wasn’t enough to erase the damage Pauline’s cheating inflicted on my ego. Switching back to being single and playing the field after a decade in a relationship isn’t easy or fulfilling. Instead, the meaningless night had left me hollower and more lost.

I swallow the frustration in my throat, bury the pack deep inside my bag and undress, avoiding even the smallest glance at myself in the mirror. I can’t stand that beaten look in my eyes, lately.

The shower’s scalding water pours down my back, washing away some of the exhaustion and misery.

A clank in the hallway startles me. I step out of the shower and slip my sweatpants on. With a long calming breath to regain some composure, I exit the bathroom to face Madison. But the brunette standing in the living room in a tight dress and stern ponytail is not my sister.

I’m French, which is as good a start as any to write Romance, if you ask me. The soft twinkling lights in the winding paved streets of Paris, the warm breeze and spellbinding smell of lavender in Provence… and we invented the french kiss, didn’t we?

Although my rebellious teenage self preferred writing crime thrillers, the passion for literature was already there, as well as my interest for languages. I learned Spanish, Italian, and a little bit of German, but English stuck with me.

As I studied english and american literature and linguistics at the University, immersing myself in the language made it impossible for me to write in French, as if my brain couldn’t create in French anymore. Luckily, it kept the french romanticism, and I fell into Romance novels.

Fast forward a few years of various choices, different jobs, different lives, my passion for writing romance is still intact, and it’s time for me to share it with you!

Share what you thought about On Common Ground PRINT and earn reward points.

Other books in the Ground Rules seriesView Series Page