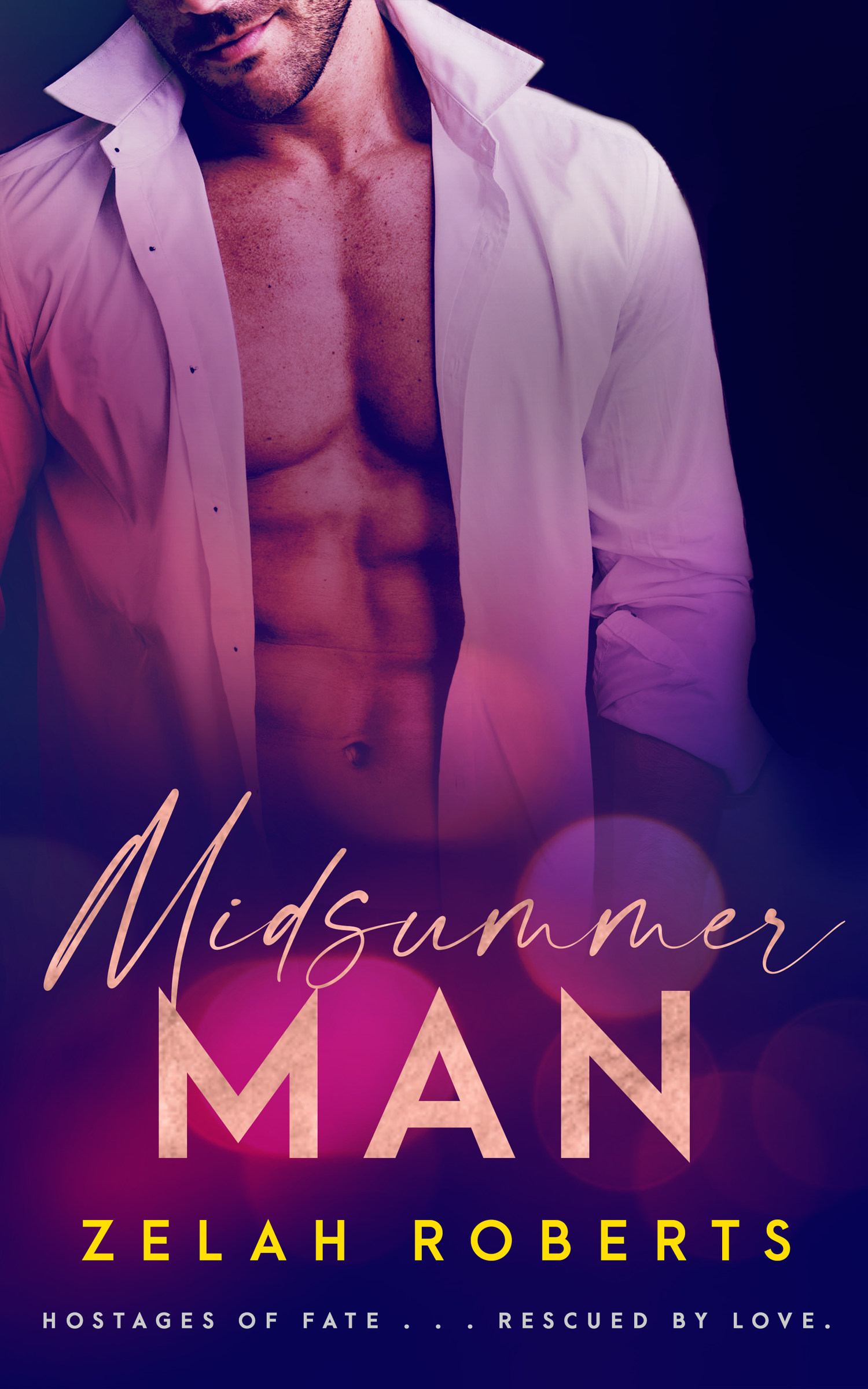 Hostages of fate…rescued by love.

Holly Mason’s past has left her with many things—a powerful need for independence and self-reliance, enduring memories of pain and fear…and an intense dislike of alpha males.

Billionaire Sir Mac Sinclair has been wounded by the betrayal of his fiancée and overpowered by his own ultra-protective alpha-male instincts after his sister is kidnapped. He has no time for romance.

But when Mac meets Holly at the beautiful Midsummer Ball, fate intervenes. The irresistible, timeless magic of midsummer seduces them into stealing one stunning, secret night of passion together.

But one night is not enough… When danger threatens, Mac and Holly are forced back together. Can they confront the traumas of the past and learn to trust each other to overcome the dangers of the present?

Reader advisory: This book contains a scene of public sex, stalking and cult references, and references to child abuse, kidnapping and sexual assault.

Renwick Castle stood high on the hill above the Wyvern Valley, its tranquil beauty bestowing an elegant timelessness upon the idyllic landscape of rolling cornfields and quaint villages below. Gilded flags fluttered from crenelated battlements in the golden afternoon sun and the vibrant ruby, emerald and sapphire stained-glass windows glowed like jewels, refracting dancing rainbows onto ancient stone floors. In the courtyard of the ancient keep, the blush-pink petals of apple blossom trees, caressed from their branches by the breeze, danced on the warm summer air like confetti.

Holly set down yet another envelope, then glanced up as her friend Melissa cleared her throat. “So,” Melissa asked, “did you try the rose-petal bath-pourri, then?”

Holly looked at her friend curiously. Melissa had given her the lovely bath set for her birthday, with strict and rather mysterious instructions that she should use it the night before the ball. “I did,” she confirmed, “as instructed. It was absolutely fabulous. The rose petals were floating on the water and the scent was out of this world. But I still don’t understand why I had to use it last night, exactly.”

Melissa looked smug. “I knew you’d do it. I bet Simon a jasmine-scented back massage that you would.”

Holly choked back a laugh. Her recently married friend was still in the honeymoon phase of her relationship with her beloved Simon. “Why jasmine, specifically?”

“Holly! Don’t you know that jasmine is supposed to stimulate your libido?”

“Ah- no. Can’t say that I did. But really… Your libido needs stimulating?”

Melissa gave her a sheepish look. “Well, no. In all honesty, if it got any more stimulated, I’d probably die. But what a way to go!”

Holly rolled her eyes. Her friend was incorrigible. “Well, naturally I’m delighted to have earned you a jasmine-scented back rub, but you still haven’t told me why I had to use my bubble bath last night.”

They moved to another table and began distributing auction lists. “Ah, yes…that. Well, this castle has been here nearly a thousand years. And for every single one of them, it has celebrated the magic of midsummer, the longest day of the year and the time when the veil between this world and the next is at its thinnest.”

Melissa threw out a dramatic arm. “Powerful forces are abroad on midsummer’s night. And in this castle, they are amplified—soaked into the very fabric of this building.”

“So, what do these powerful forces want with me, pray tell?”

Melissa looked at her triumphantly. “Well, you sprinkled rose-petals last night, didn’t you?”

“Well, the legend says that if you sprinkle rose petals on Midsummer’s Eve, you’ll meet the man of your dreams the next night. And that means, you’ll meet him tonight!”

Holly put down her envelopes and looked at her friend in frank disbelief. “Really? The man of my dreams? It’s going to bring to life Jamie from Outlander, is it?”

Melissa rolled her eyes. “There are good men in the real world, too, you know.”

Holly shook her head, amused. In her considered opinion, the only good men were fictional ones. “Melissa, you know I love you,” she began, wryly, “but I don’t want a man. I like my life the way it is.”

Damn right she did. She’d worked hard to get to where she was today, and now she was reaping the rewards of her labours. Her life was safe, settled and interesting, exactly the way she liked it. The last thing she wanted was some wretched man messing it all up.

Melissa looked at her sympathetically. “Holly, I know you had that awful stalker a couple of years ago. But you can’t judge all men by one obsessive fan.”

“And I know Taylor wasn’t the best boyfriend you could have wished for. You were just unlucky he turned out to be such an absolute—”

Holly raised a hasty hand. “I know. They’re not all like him. Some of them are worse!”

It was true. Her friend really had found one of those mythical creatures—a good man. Mild-mannered, gentle and fathoms deep in love with his adorable wife, Simon was a gentleman of the first order. But a man like that would never want a woman as hard as she was, with a background like hers. “Okay, okay. I know. Granted, your Simon is lovely, and I’m sure there are other wonderful men out there—but not for me. I’m not in the market for any midsummer magic.”

For a moment, a wispy cloud drifted over the sun and the room shadowed. Holly set down another auction list with careful precision. “Anyway, I’m too busy. I’m up to my neck in work.”

“Work won’t keep you warm at night. You won’t get to the end of your life and wish you’d done more work.”

Holly looked drily at her friend. “I won’t get to the end of my life and wish I’d done more men, either.”

At that moment, Melissa’s phone beeped, signalling a text message. Melissa glanced at the screen and a delighted smile spread over her face.

Holly raised her eyebrows. Sir Mac Sinclair was known to practically anyone with a pulse in the UK, even her, and she was no follower of the lives of the rich and famous. As the billionaire owner of one of the most prestigious building companies in the country, he was lauded for successfully and sympathetically restoring some of Britain’s most valuable and beloved historic buildings. As a qualified architect, he had also created some new structures which, with their fluid, sensuous silhouettes and environmentally friendly designs, were now considered modern classics. But he was also infamous for his obsessive need for privacy. He rarely appeared in public and declined all television interviews, which made it all the more surprising that he was coming to such a high-profile event.

Not only that, but tickets for the ball had sold out months ago, and he must have paid through the nose to get hold of one at the last minute. Sadika, who was responsible for selling tickets and organising the seating plan, must be tearing her hair out trying to slot him in at one of the tables.

Holly scowled. Although she was pleased that the charity had received more money, she hated the fact that the rich could have it all their own way, could casually buy into an event at the last minute without a by-your-leave.

“Well, great. That should get us some more publicity. Hopefully, he’ll spend a fortune and we’ll all be happy.”

“True.” Melissa’s voice filled with excitement. “But more than that, this guy is hot. I mean, seriously hot. Oh, he’d be perfect for you!”

“You are!” Melissa clapped her hands together, her eyes speculative. “You’d make the most amazing couple—”

“Oh, don’t do me any favours. The last thing I need is some arrogant megalomaniac billionaire who loves nothing more than his own reflection!”

Melissa’s face softened. “Give in, Holly. It’s fate. You’ve sprinkled the rose petals, so you might as well accept it. True love’s a comin’ for you.”

Holly shook her head. “No. No way. You know what the difference between true love and herpes is, right?”

Zelah Roberts grew up in a beautiful leafy market town in North East England. She spent a happy childhood exploring the surrounding woods and moorlands, and visiting ancient priories, abbeys, and roman ruins with her history-buff parents. These inspired her imagination, and many notebooks were filled with action-packed tales of adventure and romance.

An avid reader with eclectic tastes, her teenage years were spent navigating the magical worlds of Narnia and Middle Earth by way of Earthsea. As she grew older, her tastes expanded to take in thrillers and romance, and a degree in English introduced her to the great classics of literature.

After many jobs ranging from traffic warden to project manager, Zelah now divides her time between writing and teaching English and creative writing. When she is not lost in daydreams about her new book, she also loves spending time with her family, travelling and visiting the theatre and cinema.

Share what you thought about Midsummer Man PRINT and earn reward points.