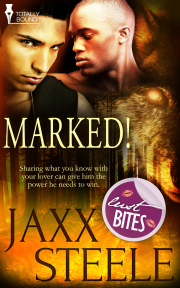 Sharing what you know with your lover can give him the power he needs to win, especially when he’s fighting a rogue wolf.

Mark Delonco was betrayed, ostracized, rejected, beaten and left for dead by a pack brother. As he wanders the forest, an unfamiliar scent brings him to a gruesome scene—and his betrayer. Another confrontation brings not only victory for the moment but also the possibility for love and redemption.

Victor Bradley could never maintain a relationship with anyone and he didn’t know why. It wasn’t that something was wrong with the men he chose, it was just that no one ever felt right to him. While visiting his forest home, a stranger appears at the door and changes his life. How can he know a man he has never met?

Victor Bradley rocked back on his chair, tapping his pen on the edge of his desk. He glared at the clock on the wall and grunted each time the minute hand ticked by. As he shifted his gaze around the room, he saw a picture of himself holding a big check and certificate. A slow smile grew as the memory of how he’d earned it entered his mind.

When the city council had decided to beautify the city to bring in more tourists, they had started a contest for ideas. Victor had submitted his idea in hopes of bringing exposure to the printing company he’d just started. He’d figured that if he could just be in the top ten it would bring him more business, but to his supreme amazement, he’d won. Winning the contest had skyrocketed Bradley’s Print Shop, making it a citywide name for business printing. His company had been contracted to make all the billboards with the new slogan to place all around town. All the major businesses came to him for advertising wares as well.

Victor chuckled as his gaze landed on the framed certificate hanging on the wall, but when he caught sight of the clock again, his smile faded. He made another frustrated noise then jumped to his feet to walk across the room. With his arms wrapped around his chest, he tapped his foot and stared out of the window.

“Mr Bradley, a courier just dropped this off,” a woman said behind him.

“It’s about time,” he huffed, meeting her at his desk.

He took the manila envelope from her, tore it open and scribbled his signature on the required pages before shoving it back at her.

“Okay, you can return it. I’m out of here.” He pulled a backpack out from under his desk then draped his arm around the woman’s shoulders to direct her from the room. “Now look, Nancy, I don’t want you guys calling me unless it’s absolutely necessary. With that said, I should be phone-call free this week since I have a staff of highly qualified people who can handle anything that may come up—right?” he asked, giving her a guiding nod.

“That’s what I want to hear.” He stopped with her at the front of their office and trotted down the steps, leaving Nancy behind. “I’ll give you a call in a few days to check in,” he said over his shoulder.

Victor threw his bag through the driver’s side window and onto the passenger seat of his car. When he started the ignition, he saw Nancy going back into the building. He pulled out of the parking lot. Although excited to be on his way, Victor was worried as well. The last time he had seen his Yaya had been about four weeks ago. She had seemed fine then, but during their conversation only two days ago, her voice had sounded filled with exhaustion. He had a feeling about what was happening and had dreaded this day all of his life.

The sun shone brightly on the cloudless fall afternoon, the autumn chill in the air subdued under its dominance. Victor put his shades in place and took to the highway. The ride to Connelly, Indiana, from Indianapolis never took him more than an hour, but he pushed the speed limit, making the trip even shorter. His family’s cabin sat back just a few miles from the main road. Dense trees and shrubbery shrouded the land for privacy. If one didn’t know of its existence, it wasn’t easily detectable. Victor turned off the paved road onto the tire-worn dirt. Taking the familiar twists and turns, he soon pulled into the forget-me-not and honeysuckle lined driveway of the cottage.

The faint answer came from the back of the house. Victor hurried to her room and stood in the doorway. All his life, the sprite he’d known and loved had been a radiant beauty with sparkling eyes, long flowing hair and supple brown skin. As he looked upon her now, everything about her seemed dimmer, duller. The shine was gone from her presence. He knew she’d come to the end of her life. It happened to everyone, but he didn’t want to accept it.

I really enjoyed the whole story. Amazing details and hot sex between Mark and Vicktor and an intense battle to the death made for a great read.

Share what you thought about Marked! and earn reward points.

I must admit my surprise when I was asked to write this blog. I have been writing romance novels for the last seven years and have written many blogs on many topics, but this was the first time this topic has come up.