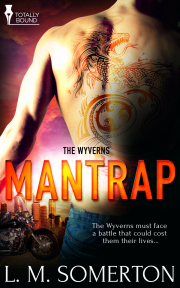 Book 1 in the The Wyverns series

Not all cages have bars.

The Wyverns Motorcycle Club has a reputation as fierce as its dragon emblem. Its enigmatic leader, Rogue Hellaby, has a police file so thick you could prop up a table with it. The qualifications for membership are a reckless disregard for authority and the attitude of a spitting cobra. But The Wyverns MC is not quite what it seems. All the riders have dubious histories in the military or the police—now they just serve and protect their own interests and those of Horatio Trap, the manipulative bastard who recruited them.

Publisher's Note: This story has been previously released as part of the Hard Riders anthology by Totally Bound Publishing.

Rogue leaned back against lumpy vinyl and fought the desire to tap his fingers against his denim-clad thigh. Impatience would get him nowhere. As always, Trap’s minion would show up when he was good and ready, not before. The annoying little shit loved to yank Rogue’s chain—one day he would have to be taught that pushing the ‘Do not touch’ button could be bad for any chance he had of reaching his next birthday.

Rogue glanced around the dingy diner. Positioned in a rear booth, he could see the front door, the counter and most of the tables. To his left, the door to the kitchen swung back and forward on badly oiled hinges, its high-pitched squeal an assault on his ears. The air conditioning droned in the background, the white noise supplemented by the restrained chatter of half a dozen patrons. In front of him, on the sticky melamine tabletop, sat an untouched cup of coffee. The surface of the dark liquid glimmered with an oil slick of scum. The waitress had already passed him more than once, clutching a full pot, hopeful for refill trade. Rogue would rather wash his mouth out with bleach. It would probably taste better as well.

At the table nearest the front window, a guy that looked like everyone’s favorite stereotype of a rough biker forked bacon into his mouth and slurped coffee. Rogue cringed. His second in command was a walking garbage disposal. Hatchet belched and shifted his muscular frame slightly in his chair slightly. The subtle signal made no difference to Rogue’s outward appearance, but inside he went to high alert. Fifteen seconds later the diner door slid open. The man who walked to the counter couldn’t have looked more out of place if he’d been wearing a hula skirt in the Arctic. Selling his suit on eBay would have funded the entire diner staff’s salaries for a month, including tips.

Rogue stretched out his legs and crossed them at the ankles. He controlled his breathing as the man at the counter took his own sweet time ordering. Rogue couldn’t hear the conversation between customer and server, but the stupid grin on the waitress’s face told him that his contact was sweet-talking the woman with a couple of pints of verbal syrup. Finally, the man strolled the length of the diner and slid into the booth opposite Rogue. He looked at the table with distaste and pulled a pristine white handkerchief from his inside pocket before wiping away a few stray crumbs. The scent of his expensive cologne wafted across the table and tickled Rogue’s nose.

“Smith.” Could the man use a false name that was any less original?

“Rogue. How have you been?” Smith’s voice was mellow and cultured.

“You’re not my boyfriend, Smith. Cut the crap and get to the point.”

Smith tutted. “You could at least be civil. We’ve been meeting for three years. I’d like to think we are friends.”

Rogue growled, low in his throat. “Friends don’t blackmail each other.”

“Mr Trap wouldn’t be so crass. Blackmail is such a sordid word. I prefer to think of it as gentle persuasion,” Smith said as he tweaked a crisp cuff, allowing Rogue to catch a glimpse of a silver cufflink in the shape of a dagger. “Mr Hatchet is enjoying his breakfast, I see. You were told to come alone.” The warmth in Smith’s voice disappeared, replaced with an icy chill.

“It’s not my problem if one of my acquaintances happens to like the food in this dump,” Rogue snarled.

“Fine. Fuck knows why, but he has a thing for you. He wasn’t going to miss an opportunity to ogle your tight little ass.” Rogue chuckled as Smith’s face reddened. “Don’t think I haven’t noticed you eyeing him right back, either.”

Rogue thought Smith might need a brown paper bag to hyperventilate into but, at that moment, the waitress sidled up to the table and placed a cup and saucer in front of Smith along with a plate holding an enormous slice of peach pie.

“There you go, honey. I even managed to find matching crockery for you.”

“Well thank you kindly, sweetness. You’re a darling.” Smith gave the woman a little pat on the backside and sent her on her way.

I really, really, really, hope you plan on writing more about The Wyverns because you've hooked my interest with all of these guys. Rogue is sexy beyond belief, and so hot I swear I needed a cold shower....

This was a really good book with action, danger, and drama. The sex between Rogue and Orlando was hot. Absolutely fantastic read. Highly recommend it.

Share what you thought about Mantrap and earn reward points.

Mantrap is a semi-finalist for the John Preston Short Story Award!

Has it been everything you thought it would be or not?
Writing is much harder work than it might appear. It takes a lot of hours, which I have to fit in around a full time job and family. I love it though and couldn’t give it up now. I need to get all those chattering characters out of my head and on to paper.

Other books in the The Wyverns seriesView Series Page