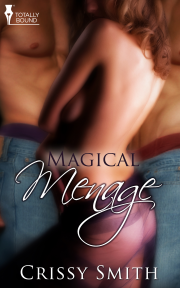 Non-practising witch Madison Montgomery can't decide between the vampire and werewolf…is it possible to have them both?

Madison Montgomery craves and wants two very different men. Instead of choosing one, she avoids both. Tired of waiting for her to make up her mind, Master Vampire Dante and the local wolf pack's Alpha Tom come up with an agreement of their own. If she won't choose one of them, she'll have both.

Ms. Smith weaved a very magical spell with this story. She enveloped me in a world of magic, mayhem and very hot passion!!...This is a very…. hot… wicked short story!

Share what you thought about Magical Ménage AUDIO and earn reward points.