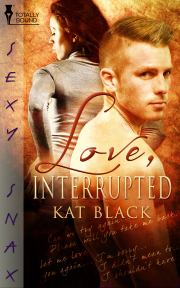 Can a broken heart forgive, when the flesh can't forget?

The last thing Frankie expects to find lurking in a pile of innocent—looking birthday cards is a letter from her estranged husband—the man who broke her heart and threw away their marriage for a night of drunken extra—marital sex. And the last thing she needs is to revisit those feelings of hurt and betrayal brought back by his words of apology and regret. After everything she's been through, is it too much to ask to be left alone to try and build a new, independent life for herself?

Apparently it is. As letter after letter falls on her doormat, and the beautiful, eloquent words contained therein slip through her tightly constructed defenses, Frankie becomes a jumble of mixed emotions and desperate desire. Rage, sorrow, revenge and lust mix to make an explosive cocktail when Frankie and Mark find themselves face—to—face for the first time since the split.

Thursday, 8.36 p.m. Balancing an assortment of items including a handbag, a laptop case, document folders and grocery bags, Frankie fumbled her key into the front door lock, keen to get in out of the biting February wind. Careful not to upset her precarious hold on her burdens, she toed the door open and stepped into the darkened hallway, crying out as her foot suddenly shot out from under her. For a frantic moment she flailed around in an attempt to regain her balance, and somehow managed to save herself and her load from ending up sprawled all over the floor. Because wouldn’t that have made the perfect ending to a perfectly crappy day. Pulse racing, but once again steady on her black suede heels, she jabbed at the light switch with her elbow and scowled down at the offending pile of post that was causing the slip hazard on the hall carpet. Her self—imposed workload these days meant she left the house well before the postman made his morning rounds, so she’d more or less succeeded in her efforts to forget that today was her birthday. But, judging by the number of gaily coloured envelopes littering her floor, it seemed that almost everyone else she knew was determined to make her remember. And as well intentioned as she knew that reminder was meant to be, it only highlighted to Frankie how little she had to celebrate this year, and triggered unwanted comparisons with her last birthday—a day filled with love and laughter and lusty good fun, and a night overflowing with pleasure and passion and the positively pornographic use of chocolate frosting. Back then, she’d not only had her cake and eaten it—she’d had the sweet treat smeared on to and nibbled off of the most intimate parts of her body as well. Parts that—dissatisfied with their current state of neglect—stirred into tingling life as she recollected the caress of soft, sticky fingers, and the lap of a hot, hungry tongue cleaning every last sugary smear from her quivering flesh. What was becoming an all too familiar ache of unfulfilled need settled low in her belly, forcing Frankie to acknowledge how much had changed in twelve months—and why it was easier for her to just try to forget. She was only grateful that these days there was a cold, hard void in her chest where her heart used to be, sparing her from reliving an even worse pain. With a weary sigh, she kicked the door shut and shuffled around the rainbow-coloured paper mountain blocking her hall, wondering if she could get away with shoving the whole lot straight in the recycling bin. Appalled at the thought even as it popped into her head, Frankie felt a burning rush of shame at the uncharacteristic sense of ingratitude. She was lucky to have friends and family who so obviously loved her, she reprimanded herself. If she wasn’t careful, she might end up losing them—on top of everything else she’d already lost. But that was just the problem—she couldn’t seem to bring herself to care much about anything anymore, not when she felt so damned tired all the time. Tired and angry. Entering the sitting room, Frankie used the glow from the hallway light to pick her way around her landlord’s plain, functional furniture and unload half her burdens onto the coffee table. Taking the shopping bags with her into the kitchen, she turned on the harsh, fluorescent strip light and began unpacking the uninspiring selection of staples she’d bought by rote, storing the items away in her near—empty cupboards and fridge. After months of living there the place still had a depressingly temporary feel, reminding Frankie that she needed to make some time to get herself more settled in. Start making it less of a house, more of a home—her home—even though the basic accommodation and dated decor felt a million miles away from the comfortable, stylish riverside apartment she’d poured so much love and soul and hope into, and missed so much. Pulling a box of chamomile tea from a bag, she considered putting the kettle on but found herself instead grimacing at the thought of the taste. It was only because her mother swore by it for calming the nerves that she persevered with the disgusting herbal beverage. A sudden loud pounding on the front door made Frankie jump, shriek and nearly drop the box, suggesting that either she wasn’t drinking enough of the stuff, or that, in her case, it wasn’t quite up to the job. Moments later, a rowdy rendition of ‘Happy Birthday’ and the hoot of party blowers joined the pounding, and Frankie couldn’t help but smile at the terrible racket as she recognised the loudest, most off—key wailing of the lot.
Buy Now

Kat Black resides in England, where her hot and steamy imagination has its work cut out trying to combat the effects of the dull, miserable weather. Author of erotica that is sometimes sweet, sometimes sharp, but always intense, Kat has a range of short stories published in print and e-format both in the UK and US.

The angst in this book was lovely, the emotion well written and powerful. I was drawn in to their story through his letters and the dialogue. There wasn't that much sex in this but what there...

Love, Interrupted draws you in and makes you consider things and realize again that there are shades of grey within life...

Share what you thought about Love, Interrupted and earn reward points.