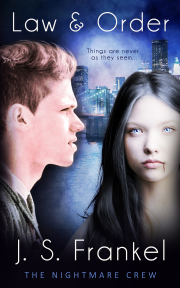 Book 2 in the The Nightmare Crew series

The Nightmare Crew is on the hunt for their evil genius creator, but they find trouble that could spell the end of them all.

Paul Wiseman and his crew return to battle their greatest opponents yet—versions of themselves.

Paul has been transformed into a werewolf, and along with his girlfriend and the rest of the crew—a vampire, a sentient water being and a resurrected zombie—he moves out to the west coast to set up shop in the Sierra Madre mountain area in order to fight crime.

They also seek more information on Andres Peterson, a ruthless and clever industrialist scientist, whose company made them.

Peterson has fashioned his own version of the crew, but their methods of fighting crime are heavy-handed, cruel and unjust.

Things are never as they seem, and it will take a death and a winner-takes-all fight to settle it. Will evil triumph?

Reader Advisory: This book contains references to scenes of intense action and some of the content may not be suitable for those under the age of fourteen.

Paul Wiseman scanned the area, inhaled a breath of foul night air, wrinkled his nose at the various smells abounding—car exhaust fumes, sweat and the nasty stench of beer and vomit—then exhaled softly. Odors on a hot summer night, he reflected. What else did one get when patrolling a large city?

Turning to the matter at hand, he touched the tiny com-link inside his left ear. It gave a small beep, and he whispered into the intercom that hung around his neck, “Is everyone ready?”

From his position in an alleyway across from the target, he made sure to keep in the shadows. Nothing save a few rats looking for food disturbed the quiet of the night. Still, he kept an eye out for anyone who might happen by. This wasn’t the friendliest of all places to walk, but some homeless people occasionally turned up and he didn’t want their lives endangered.

Keeping the idea of a low profile in mind, he flattened his back against the wall, surveyed the area and stayed as motionless as possible. Night was his friend, his ally, and hiding in the shadows, crouching on rooftops and even taking to the sewers all had their merits, although the stench of the last hideaway nauseated him.

Tonight’s target sat on the surface and lay at the edge of town. It was a warehouse, large and aged, sandwiched between two other abandoned ones. Everyone knew it manufactured illegal drugs.

From preliminary reports, he knew it to be heavily guarded. Ironically, even though the police acknowledged its existence, they never went near it. They knew who ran the show, so did everyone else. It was a just a matter of who wanted to cross the line and take on the syndicate first.

Since coming from the Bronx five months ago to live in the mountains of Sierra Madre near Los Angeles, Paul had studied the topography, learned every street name, scouted the hotspots and knew as much about the area as any native Los Angelino. From researching files on America’s Most Wanted, he also knew the police wanted to take down this particular manufacturer of death. He was also after the same target, a kingpin, the drug lord known only as ‘Azuras’.

Little was known about this man. He might have come from Colombia or from Canada. Paul had seen one picture of him. In his forties, he stood around six-four, weighed in the neighborhood of four hundred pounds, and always traveled in a limousine with bodyguards—lots of them. If the chance came, then he’d—

“Ready.” The reply came from Angela.

Casting his gaze upward, he saw her lounged against the brick railing of a building opposite the warehouse, six stories up. Even in the darkness, he saw her costume—a black leather outfit, leather boots, and a long cape the color of the night that she’d tricked out with an edge that glowed in the dark and illuminated her slender figure as she flew along. In contrast, he wore jeans and a T-shirt and felt positively underdressed for the occasion. Superheroes had capes and creative costumes. He used Target throwaways.

For any ordinary person, to see someone from so far away would have been impossible, yet Paul could not be considered ordinary in any way. A hybrid of a teenager and a wolf, he had enhanced night vision, among his other assets of speed and strength.

Right now, he wasn’t thinking about what he could do. Instead, he focused his gaze on Angela. A slow, shy—yet sexy—smile spread across her face, and it never failed to give him confidence in whatever assignment they’d decided to tackle. “I’m good here,” she added.

He waved his hand in a quick, sharp motion. She gave him the thumbs-up sign and went back to her patrolling duties.

Another voice came through Paul’s intercom. It was Ooze, and he also gave a one word reply—“Ready.”

Ooze always sounded as if he were underwater. Though, considering Ooze was made of water and lived in a containment suit, how else would he speak? Positioned in a van about two blocks away, he’d parked in a place where he could observe, yet still be out of harm’s way. “I’m watching things. Haven’t seen any movement yet.”

From that distance, Ooze had his eye on everything, courtesy of some heat-imaging equipment that could track anything within a thousand meters. He also had a radio transmitter, removable license plates on the van so the authorities wouldn’t be able to trace them and other assorted goodies that he’d dreamed up in his spare time.

The voice, gravelly and low, came from CF. Dressed in dark pants, heavy workman’s boots and a shirt barely able to contain his bulk, he lurked in the shadows of another alleyway a block away to the right. “When aren’t you hungry?” muttered Paul into his intercom, as he got himself into position for the strike.

The intercom he wore was indeed a marvelous device. No larger than a pin, it was capable of picking up and transmitting the faintest sounds within a five-hundred-meter radius—very useful for when the group had to be on the move.

That’s just wonderful… Paul shook his head in frustration, as well as with a tinge of respect for the zombie’s size, strength and willingness to get hit. CF stood for cannon fodder. It was amazing, another medical miracle, in fact, that something so large—in the realm of seven feet high and around three hundred pounds—could eat so much, never get rid of it and still ask for more.

“Hang on. We’ll be finished soon,” he whispered.

Turning his eyes back to the warehouse, Paul took note of the location, the time and other sundry details. Checking for movement up and down the street, he found none. Previous reconnaissance had revealed that no one inhabited those abandoned warehouses, and that was an added bonus. Good thing, as there was likely to be gunfire, and he didn’t want anyone hurt. Civilians were innocent. They needed to be protected.

In the quiet before the upcoming storm, he reflected on the name the press had given them—the Nightmare Crew. He didn’t think of himself as some kind of superhero or his friends as being anything but people with extraordinary powers. All the same, though, they were different and special. The media? They liked to stick monikers on everyone.

Since they had a moniker, the Nightmare Crew had also adopted a mantra. ‘Protect the innocent. Take down the guilty. Leave no traces.’ He thought the nickname was cool and the mantra even cooler. Who cared if it sounded corny? To him, it totally rocked, and the people along with the mass media seemed to groove to it as well.

J.S. Frankel was born in Toronto, Canada, a good number of years ago and managed to scrape through the University of Toronto with a BA in English Literature.  In 1988 he moved to Japan and started teaching ESL to anyone who would listen to him. In 1997, he married the charming Akiko Koike and their union produced two sons, Kai and Ray. J.S. Frankel makes his home in Osaka where he teaches English by day and writes by night until the wee hours of the morning.

The character development was fantastic, especially when it came to Paul.

There were plenty of shocking plot twists to keep my attention as well. I especially enjoyed seeing how the author...

Share what you thought about Law and Order PRINT and earn reward points.

Other books in the The Nightmare Crew seriesView Series Page