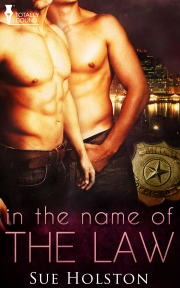 In the Name of the Law

Baltimore police detective Mitch Dawson is in love with his partner, Ivan Stanislav, but will fate intervene before Mitch can reveal the truth?

Mitchell Dawson is a detective with the Baltimore Police Department's Vice unit. He's hard-working, dedicated…and carrying around one big secret—he's in love with his very straight, engaged-to-be-married partner, Ivan Stanislav. Then Ivan's fiancée dumps him and too much alcohol leads to Mitch and Ivan sleeping together. The next morning, Mitch figures their friendship and partnership is over, but surprisingly Ivan doesn't bring up their encounter. On the outside, life continues on for the duo. However that night changed everything for Mitch.

When Ivan is shot and nearly dies, Mitch realises he has a choice-keep quiet and eventually watch Ivan fall in love and marry someone else, or tell Ivan the truth and reveal he's been in love with his partner for years, hoping the other man might feel the same. Will Mitch risk it all for love?

Publisher's Note: This story has been previously released as part of the His Hero anthology by Totally Bound Publishing.

This is the way the other half live, thought Mitch Dawson as he walked into the Ciao Bella restaurant and engaged in a mild tug of war with an insistent majordomo who wanted to relieve him of his broken down and worn black leather jacket.

As Mitch stepped into the select atmosphere of the restaurant to follow the waiter through to the party, he looked around at the tasteful décor of one of Little Italy’s most upmarket venues and suppressed a shudder. This was so not his style. He was just a simple kid from Dundalk. He was more used to beer and burgers from the bar on the corner next to his apartment. All around were white tablecloths and burnished silverware, and let’s face it—he didn’t even want to be here.

Tonight he was going to have to put on a brave face, smile and congratulate his partner on his engagement, even though it felt like the end of his own private world. Not only was the celebration tonight going to break his heart, but he would also bet that he wouldn’t get a decent beer for the rest of the evening.

He stood in the doorway, looking around, and a smiling waitress confirmed his suspicions by offering him a glass of wine as she strolled by. Sighing to himself, he smiled ruefully and accepted a glass at random, sniffing at it suspiciously. Then he drew in a deep breath, squared his shoulders, and entered the room to find his partner so that this nightmare could end sooner rather than later.

Mitch found Ivan sitting at a table in earnest conversation with his fiancée, and two people whom Mitch assumed to be her parents. They were an older couple who were surveying the people who thronged the room with an aura of smug satisfaction.

“Hey, man!” Ivan Stanislav, with his familiar, shaggy blond hair and shining, gleeful green eyes, rose to his feet to pull him into an all-enveloping hug. “I wondered if you’d make it, or if you’d bail. I know it’s a little above your touch…”

“You trying to tell me I’m a peasant or something?” Mitch took in his partner’s glowing face and his evident joy at him being there and gave his shoulder a friendly punch. Turning to the pretty, dark-haired girl sitting beside Ivan, he held out a hand in greeting. “Good evening, Sarah. Looking pretty damn fine this evening. If you weren’t taken, I’d snap you up myself!”

She smiled thinly at him and turned to introduce her parents, who were gracious but somewhat reserved. Mitch made his excuses as soon as he could, leaving the happy couples to their conversation.

Checking out the crowd, he realised he knew almost nobody there. They were evidently friends of Sarah and her parents, going on the number of older couples in the room. It took him a moment or two to spy a friendly face, but it was with a mild sense of relief that he made his way across to where he could see his captain standing in a corner, drinking the longed-for beverage.

Losing no time, Mitch went straight for the burning question. “Hey, Cap, where did you find the beer?”

Smirking, the other man reached to shake his hand and said, “Stick with me, young Padawan. I have connections in this joint.” Beckoning the waiter, who was standing by the door, he grinned. “Stelio, this is Mitch, and he’s one of my detectives. He needs a beer—can you feed his habit?”

Nodding, the waiter disappeared out to the bar, returning almost immediately with the promised beer. Mitch handed him his glass, still full of wine, and accepted the bottle of some unfamiliar micro-brew with a fervent thank you. “I think I love you, man,” he said to the waiter. “You’re gonna stay somewhere nearby, aren’t you?” Laughing, Stelio nodded his assent and was returning to his post when a sudden commotion distracted them all.

Ivan’s phone had evidently gone off, because he was standing, holding it to his ear and looking serious. The one who had attracted the crowd’s attention was Sarah. Her pretty face was contorted in fury, and she was shrieking.

“No! Not this time. I’m not doing this anymore. Can’t you get someone else to cover for you? Just this one night?”

Dropping his phone, the big blond turned to her, his face pale. “Come on, Sarah. Please, don’t do this. You know it’s my job.”

“I’m not going to take second place to a bunch of petty criminals. I’m not going to be that woman who sits home every night and never knows whether her husband is going to come home alive and well or in a body bag.” She snatched up his phone and threw it across the room towards Mitch. “You promised that this evening would be different. You promised…”

Mitch watched in disbelief as Sarah pulled off her engagement ring and thrust it at Ivan. His partner stood motionless, unable to take back the diamond that had cost him two months’ salary.

His heart lurched at the implications of the little scene he’d just witnessed. He was ready to intervene—was already stepping forward even though he had no idea what to say that would diffuse the tension in the room—when Ivan, whose face was ashen, turned and made for the exit with jerky footsteps. Before Mitch could reach him, he was through the door and gone, leaving behind a hubbub as people began to speculate. Sarah had resumed her seat, and her father rose to his feet to encourage people to stay and enjoy the party anyway.

Mitch shook his head and headed to the door. He knew that above all he needed to find his partner and make sure he was okay. Ivan would need someone to comfort him, a shoulder to cry on…and that’s exactly what he would offer. The fact that somewhere deep inside him lurked a feeling of relief was beside the point. He would be there for the man he loved.

Sue Holston is the writing team of Holly and Sue, who have been friends for more than a decade.

Holly has been reading romance novels since sixth grade. She always wanted to write one and now after finishing her second graduate degree, she's finally gotten the chance. In between writing and working, she volunteers for a local dog rescue and tries very hard to say no when asked if she could foster just "one more dog!"

Sue is an an ex-patriot Brit who lives in Vancouver BC. She has a cat and a compulsion to write. The rest is subject to change without notice.

This is a well written story, and the first story I've read by this writing pair. I think they pulled off the unrequited love bit quite well. It is definitely a situation that can take over your...

The well-known theme of 'best friends become lovers' comes to fresh life in the heart wrenching and hot story of two police detectives who have been best friends forever.

Share what you thought about In the Name of the Law and earn reward points.