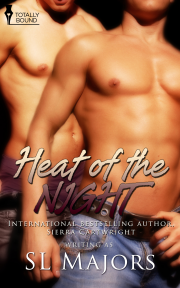 Heat of the Night

Bad boy Stephen Powell has finally met his match in Dakota Youngblood, a sexy, Alpha and older man who shows Stephen a thing or two in the heat of a hot summer night.

It was supposed to be punishment…

Last week he'd been living the high life in Monte Carlo, and now, after yet another brush with trouble, ultimate bad boy Stephen Powell has been banished to Wyoming, which might as well be the middle of nowhere.

Stephen wasn't expecting to fall in love with the wild land or with its untamed rancher, Dakota Youngblood, a man as rugged as the mountains he calls home. Youngblood sizzles with intensity and teaches the brash younger man a thing or two about life, about passion, about commitment…

Publisher's Note: This book has been previously released as part of the Friction anthology by Totally Bound Publishing.

What the hell was he doing here?

Stephen Powell belonged in London, partying until dawn, hanging out with friends, fucking random girls, and breaking up the monotony with cruises on his cousin’s yacht. Last week he’d been in Monte Carlo, waited on hand and foot, gambling away the nights.

And now, here he was, in god-fucking-forsaken Wyoming.

If it hadn’t been for the GPS in the four-wheel drive vehicle he’d rented at the Denver airport, he’d have never found the city, if it could be called a city. Not that it would have been any loss. Almost the geographical centre of Wyoming, Riverton was a piss hole.

He’d driven around the town twice. It had taken about fifteen minutes with the stop light on Federal. As far as he could tell, there were a couple of restaurants, painfully few places to buy whisky, and a big twenty-four hour superstore that anchored the north end of Federal Boulevard.

There was no place to hang out, no place to buy designer clothes, and hell, not even a place for his weekly haircut and what his last girlfriend called “manscaping” that kept hair from places he didn’t want it.

He couldn’t believe the town actually had a Main Street with an historic downtown that was laughable for its size, lack of architecture, and boarded-up windows. He almost expected Wyatt Freaking Earp to walk down the street, a six-shooter strapped to his thigh. That would have been entertaining, at least.

Town marquees pointed out that the town was gearing up for the Fremont County Fair. He rolled his eyes. The best entertainment in town was a fair?

Stephen parked in front of a liquor store and angled his long, lanky body out of the air- conditioned sanity of the vehicle’s interior.

Wasn’t it supposed to be colder than the Arctic here?

The bank thermometer read 102 degrees. Fahrenheit. He didn’t know what that calculated out to in Celsius, but it was hot enough that waves of heat seemed to rise off the tar parking lot.

His cotton T-shirt plastered to his back, he walked into the liquor store. He’d chosen comfortable shorts and athletic sandals for the trip. He couldn’t imagine being dressed in jeans like some of the people he’d seen.

There was a small bar attached to the store, and there were maybe a dozen people ensconced in the smoky depths, gazing at a television. Unbelievably, there wasn’t a flat panel screen in sight. Not that it mattered. No one seemed to actually be trying to watch the TV. Half the patrons were shouting loud enough to drown out any sound, anyway. One guy, already half pissed, was flirting with the waitress.

Surely he’d died, gone to hell, and there was no one to say any prayers to redeem his sorry soul.

He grabbed a case of beer and balanced a bottle of Ireland’s finest whisky on top.

“Anything else?” the clerk asked, lazily punching the register’s keys.

“Smokes.” Stephen pointed to a pack of Marlboros. If he was going to be a cowboy for a fortnight, might as well smoke like one.

At least he could have some basic comforts for the next fourteen days. Jesus, God. His Aunt Josephine was hoping two weeks here would rehab his bad boy tendencies. He’d already decided to make one change. Next time he found himself in trouble, he’d call someone else to get his sorry arse out of the local jail.

SL Majors enjoys living on the edge. She pens stories to tantalize and arouse, maybe shock and, hopefully, to make you think.

From her earliest years exploring England and Wales (and finding out early what nettles are!), she's learnt that things aren't always as they seem. She hopes to capture that in her stories.

She encourages you to delight in life and the unexpected, embracing each experience. It's her greatest hope that at the end of her stories, you'll say, "What if?"

...sinfully sexy...Ms. Majors has a delightful writing style which fully engages the reader...You are going to enjoy it as much I did.

A sweet, sexy tale you won't want to miss with an exceptional writing style and emotions that leap off the pages. This story deserves 5 Cherries.

Share what you thought about Heat of the Night and earn reward points.