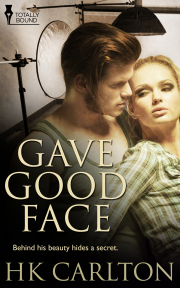 Behind his beauty hides a secret.

Male model, Lot Reardon has been the reigning ‘it’ guy on the runways of the world for the last decade, but he’s beginning to realise his time in front of the camera is winding down. While mulling over his options for the future, Lot is asked to do an impromptu cover shoot with the glamorous and alluring, up-and-coming Pasha Rossdale.

Pasha Rossdale is thrilled and a little bit star struck when she’s paired with the striking and charming Lot Reardon. As soon as Lot and Pasha begin to pose, and play off each other under the hot studio lights, raw desire consumes them.

However, one night of smouldering sex turns into something more meaningful, making Lot and Pash the new ‘it couple’.

Can the beautiful relationship survive their changing roles and massive egos, or will Lot’s jealousy and suspicion jeopardise all that they have?

Reader Advisory: This book is best read in sequence, followed by Hard and Fast.

Lot Reardon stepped from the shower stall in his dressing room, towelling his dark hair.

“Hey, Lot, glad I caught you. Can you stay for a couple hours?”

Still holding the towel to his head and about out of patience, he stared at his agent, Ray McMullen. The entire day of shooting had been a disaster. Nothing had gone smoothly from the lighting, to the set, to the other models who’d been nightmares to work with. “For what?”

“Well, to tell you the truth, the photographer and the magazine execs aren’t happy with the shots they got of their cover models. They want you to stay and take some test shots.”

“No, they’ve got Pasha Rossdale’s people talking to her right now, to see if she’s game.”

They wanted him to pose with Pasha Rossdale? Lowering the towel, Lot grinned at his representative. “I’ve always wanted to work with her.”

“Yeah, I know you have.” His agent smiled, in relief.

“Huh, well, maybe we can salvage this day after all.”

“That’s my boy, but one small problem.”

“The stylists have gone home.” Ray looked up at Lot’s wet messy hair.

“You do know that I’m quite capable of combing my own hair, right?”

“Yes, of course I do.” He laughed, then his features turned serious. “Do you?”

“I can, and you know what else? I can brush my own teeth and wipe my own ass, too.”

“Get the fuck out of here and let me get dressed.”

When Ray was gone, Lot pulled on the pair of jeans, the ones he’d arrived on location wearing, then dragged on his shirt, leaving it unbuttoned. He had no idea what they had in mind or if he’d be making a wardrobe change shortly.

He sauntered back out onto the set, waiting to see what was expected of him.

“Ah, here’s Lot now,” the photographer Doug, gestured him over. Lot had worked with him many times and found him both professional and talented. “Any news on Miss Rossdale?” he asked the assistant beside him.

They all turned to watch the exquisite, statuesque blonde walk towards them. She was also casual, in street clothes—a cream coloured camisole and beige short shorts, that made her toned and tanned legs look, like they went on forever. But damn, was she sexy in them. She also must have taken advantage of the shower facilities, her hair although mostly dry still held that damp sectioned look. She was almost completely devoid of makeup except for some mascara lengthening and darkening her lashes.

Pasha Rossdale had come into the business around the time that Lot had been at the top and very much in demand. They’d been to many of the same photo shoots, but other than a passing greeting or a smile, they had never actually been formally introduced or spoken more than handful of words. But Lot had admired her work, not to mention that face and body for a long time.

As much as he had the dark and smouldering thing going on, she had radiance and smokin’ hotness. But whereas, Lot felt like he was nearing the end of his career, Pasha’s name was just beginning to be bandied about with the likes of Heidi and Giselle. And just like her predecessors, the press had dubbed her simply Pash or Pasha, no Rossdale required. And the real kicker was that he’d never heard a bad thing about her. Any other model that had worked with her in the past, male or female had nothing but glowing things to say about her. She wasn’t a diva by any stretch of the imagination. He didn’t think there was anyone else in the industry that could claim that. Not even him. He had been difficult. Especially lately, when retiring was the first thing on his mind when he got out of bed every morning.

“Ahh, there she is. Lovely. Thank you both for agreeing to stay,” Doug said, as the magazine people joined them.

As the bigwigs and the photographer began to swap ideas, Lot smiled at the beautiful woman at his side.

Returning it, she stuck out her hand. “Nice to finally get to work with you Lot, I’m Pasha.”

Enveloping her hand in his, he bent and kissed the back. To his delight, her smile widened. “I feel the same. It’s about time.”

“Okay,” the photographer turned. “So what we want is just natural. We’re going to turn on some music and let’s just see what develops, all right?”

They each nodded and followed him to the spot where all the lights were focused.

Doug posed them the way he wanted them to begin. Just facing each other, Lot’s hands on Pasha’s hips.

Lot was busily drinking in the fresh-faced beauty. Most of the women he worked with had makeup caked on, and generally so did he, but this natural state made her even more stunning.

Once Doug had Pasha where he wanted her, he walked away, leaving them alone. With her hands on his shoulders, she gazed into his eyes gifting him with a soft smile. “Well, hello, handsome,” she said. She had the most amazing dark eyes, which were almost startling with her blonde hair and fair skin.

“Pasha. What kind of name is that? Or is it a stage name?” he wondered.

“No, it’s all mine. My grandmother was a Dr Zhivago fan and unfortunately she passed that on to my mother. I’ve never actually seen the movie myself, but I’m not even sure if Pasha was a nice character. Mom just loved the sound of the name. It’s more commonly a boy’s name.”

“Yes, that’s what most people say. But secretly, I think I made out a whole lot better than my sister. Her name is Josslynn.”

He didn’t find that strange but then, he smiled as he put it all together. “Ahh, Josslynn Rossdale.”

Share what you thought about Gave Good Face and earn reward points.