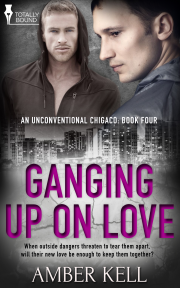 Ganging up on Love

When Dirk volunteered to take the information to the resistance, he didn’t know he’d find his perfect match in their leader. Determined to find a place among them, he offers to help wherever he can.

Leon has always been alone, afraid of trusting anyone with his affection. When the visitor from Ward Three comes in with important information to bring down the mob bosses, he doesn’t know how to handle their instant attraction.

When outside dangers threaten to tear them apart, will their new love be enough to keep them together?

Dirk leaped for the train car. His foot caught the edge of the rail. Threatened with tumbling onto the moving track, he threw his body forward, slamming into the hard metal surface.

Groaning, he flopped onto his back.

“I see you haven’t gotten any more graceful since I last saw you,” a familiar voice spoke above him.

His sister stood over him, a sly smile on her face. “Hello, brother dear.” She held her pose for only a minute before she crouched down to his level and wrapped him in her arms. “I’ve missed you.”

The fears he’d been harboring for the past few months eased. He’d worried she’d been killed by the mob. The White Widow ran Ward Four and from what he’d heard, she made the psycho twins in Ward Three seem like sweet cherubs. As the only female gang leader in Chicago, she ruled the ward through intimidation and outright bribes. What she couldn’t get through threats she tossed money at, and she had a lot to throw. Rumors flew that she’d killed off her husband to get control of the mob. She always wore white and bleached her hair to match. The sight of a white limo driving anywhere in Ward Four incited instant fear.

Dirk hugged Massy tight. Her bones were more prominent than they had been the last time he’d seen her.

They’d been close as children and even though they’d gone different paths as adults, he still had fond memories of chasing her through the city streets in games of tag while pickpocketing strangers. Even then, they’d had to earn money for the gangs.

She pushed futilely against him until he let her go. “I have to breathe.”

“You always were such a picky thing,” Dirk joked. He examined her carefully. She did look thinner but the smile on her face was genuine. “I missed you, Massy. Why didn’t you tell me what you were up to?”

“Because your closest friend is the brother of mob bosses.”

“You didn’t trust me not to tell Georgio?” Hurt stabbed at him. He’d searched for her and had worried incessantly that she might be dead, and she’d held back because she doubted his loyalty? “When have I ever betrayed you? You didn’t even leave me a note.”

Regret flickered across her face. “I’m sorry. I just had to get out of there. I didn’t think you’d say anything on purpose but if they tortured you then you wouldn’t be able to tell them anything.”

“Well, that worked.” Dirk let bitterness fill his voice. “They almost beat me to death and I didn’t tell them anything…just like I wouldn’t have if I had known. These are from them!” He pointed out the bruises on his face. They’d blossomed into some truly brilliant colors.

He turned to look out the boxcar door, unwilling to meet his sister’s eyes. Fury burned through him. He’d helped raise her after their parents had been murdered but she hadn’t trusted him with her life. She’d always been independent and stubborn—bordering on selfish—but he’d thought they at least had trust between them.

“Dirk…” She put a hand on his shoulder.

He stood up, letting her hand fall away. “What?”

“I-I’m sorry. I came for you now, if that means anything.”

“You didn’t know who was coming.” Dirk clenched his jaw to hold back the angry, hateful words teasing at the tip of his tongue. Sentences he’d never be able to take back once they hit the air were barely held in by his pressed lips. 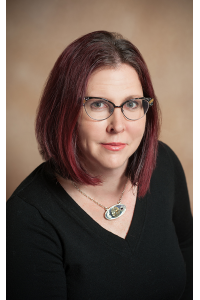 Ganging up on Love was a rather exciting chapter full of betrayal!  OMG!  It is amazing that anyone can ever trust anyone in this world.  Heart stopping!

For such a little book, it packed a lot in. I liked this little snippet from the anthology. It was fast paced and an enjoyable read.

Share what you thought about Ganging up on Love and earn reward points.