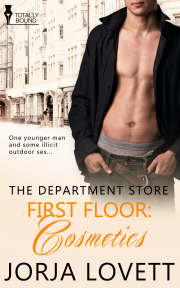 Book 2 in the The Department Store series

From the outside, it looks as though Maggie Fenton has it all. The glamorous head of the cosmetics department lives a life of luxury, but money definitely hasn’t bought her happiness. In reality, she’s married to a serial cheat who has made her life a misery for over a decade. With her husband chasing younger women, and her teenage co-workers’ catty comments ringing in her ears, Maggie’s resigned herself to being on the scrap heap. Until Jonah Hamilton puts temptation in her way and reminds her she’s still a red-blooded woman.

Commitment is a four letter word as far as Jonah is concerned. He has no intention of settling down when he has the whole world at his feet. The only reason he takes a summer job at Kelsey’s is to fund his travels. Well, that, and the sexy older woman he can’t help flirting with over the makeup counter. Maggie soon becomes a good friend and someone who shows him how good love can be.

The chemistry between them is undeniable but is a fling enough to satisfy their desires, or is it simply the start of something bigger?

Maggie drove along the M2, letting her tears fall without fear of someone seeing her. Here in the confines of her light blue Volkswagen Beetle was the only place she felt free to be herself. Once she reached Kelsey’s Department Store in Belfast’s city centre, she would plaster a smile on as she always did and pretend everything was rosy in Maggie Felton’s garden.

Somehow she would have to gloss over the fact that her husband was having an affair and carry on as normal. She didn’t know which part of the whole thing concerned her more about the state of their marriage—that he didn’t even try to hide it, rolling in at all hours smelling of perfume and sex, or that she was glad she wasn’t the one sleeping with him.

For the last decade, their sex life had been almost non-existent, and that had suited her fine. It had become just one of her wifely duties she had to perform every now and then, like hosting dinner parties for the partners at Peter’s law firm. However, these tears weren’t for her lost marriage. Rather, for her lost life.

Nevertheless, once she was inside the hallowed halls of the stately Victorian building, Maggie would slip on the mask and smile sweetly at the customers as she did every day.

As she slowed to a snail’s pace in the rush hour traffic, she caught a glimpse of a luxury cruise liner anchored in Belfast Lough. Sometimes she imagined what it would be like to sail off to exotic climes and start again.

An impatient driver sounded his disapproval of her daydreaming as the lights turned green.

“Sorry,” she mouthed into the rear-view mirror at the sound of the car horn.

Ten minutes later, she turned into the staff car park, hoping to avoid the glamour girls until she could make some essential repairs to her makeup. No such luck.

“Oh, Margaret. You look positively washed out.” Shona rushed over to greet her with the first two jibes of the morning.

Maggie hated anyone using her full name. It sounded like she should be wearing a twin set and pearls. And Shona believed anyone whose complexion was a shade lighter than burnt sienna on a paint chart wasn’t socially acceptable. Especially for a sales woman on Kelsey’s cosmetics counter.

Lorraine clip-clopped across the tarmac on her impossibly tall heels. “If you’re not feeling well, we could cover for you.”

“Thanks. I’m okay. Nothing a bit of warpaint won’t fix.” Maggie bared her teeth in a humourless smile.

The bleached blonde, buxom dolly-birds couldn’t wait to push her out of the department and claim her seniority. At thirty-nine, Maggie was nearly twice their age, but her hair was naturally golden and her blue eyes sparkled more than their shark eyes ever would. At a guess she would’ve said it was young Mr Kelsey who’d hired these two back when he was still in his playboy stage. These days his partner Jen from the toy department would probably have something to say on the subject.

After a quick spruce up in the Ladies bathroom, Maggie left her home life behind to stand at her counter. The first customers started to roll in as soon as the doors opened. Jamie Kelsey had recently started work on remarketing the store and the increased footfall marked his success so far.

Maggie was glad to see people milling around. It made the working day more enjoyable to serve the public rather than listen to the gossipy glamour girls.

“Would you like to try a sample of our new age defying moisturiser?” She held the tub of cream in her hands as if it was a star prize on a game show, and targeted a sophisticated older woman.

“No thanks.” The curt reply was more than the complete denial of her existence Maggie had become accustomed to during these promotions.

“Have a nice day,” Maggie called after her with her smile still in place.

She did her best not to be offended when the customer lingered with her colleagues instead, but a sigh escaped her painted pink lips as she lost another one to the gravitational pull of youth. More often than not, Maggie’s clientele consisted of elderly ladies more interested in a chat than buying.

“This is our new face lift in a jar,” she tempted passers-by, although she remained doubtful about the claims. Peter had hinted on more than one occasion that she should think about having some work done.

She turned the pot over in her hands to study the dazzling list of ingredients. What the hell was ‘elasticum plumptivium’ anyway?

The remark came from the young man beside her. He was a strange mix of wild beast and business man, dressed in a smart black suit with the top buttons of his white shirt open and his blue tie hanging loosely around his neck. His dark hair was slicked back but the dark stubble lining his jaw gave the impression that he was more at home wearing board shorts and flip-flops.

Jorja Lovett is a British author with both Irish and Scottish roots, which makes for a very dry sense of humour. Writing since she was old enough to wield a pen, it wasn't until she joined her crit group, UCW, that she pursued her passion seriously.

Now, with Joe Manganiello as her permanent muse, if she can leave the pause button on her Magic Mike dvd long enough, she hopes to spend the rest of her days writing steamy romances.

Absolutely loved this one. I'm a big fan of Jorja's works and this story is one of the reasons why. Jorja has the unique ability to make you laugh, grab a fan, and sit on the edge of your seat, willing...

Share what you thought about First Floor: Cosmetics and earn reward points.

In Love with Romance

Romance is one of the biggest selling genres in the book world and it’s no wonder, when it covers such a wide spectrum. These days we have everything from sweet, chaste relationships to explicit ménage. Each to their own, I say, but I do prefer books on the steamier side – both to read, and to write. Although, I still need the romance, that connection between the characters, to fully appreciate the hot sex when they finally get it on!

David Addison and Maddie Hayes. I think Moonlighting nurtured my love for using banter as foreplay in my books. I love me a wise-cracking hero who meets his match in the feisty female lead.

Other books in the The Department Store seriesView Series Page