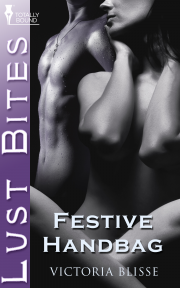 A designer handbag is all she wants but he desires domination this Christmas. When Patrick breaks up from his girlfriend on Christmas eve he is faced with another Christmas spent all alone. But then he meets Kelly. She is curvy, confident and happily plays Mistress making Patrick's Christmas dreams come true.

But will he be able to fulfil her kinky fantasy in return?

It wasn’t pretty, it wasn’t perfect but it was needed. My girlfriend, Taylor snored demurely beside me, and I tried hard to conjure her image as I wanked. I could not do it. I was so unused to sexual advances from her that I found it hard to picture her in that way.

I had a fantasy girl who sprung immediately to mind, small, curvy and dripping sex. I had no problem imagining her riding me. Commanding me to pleasure her. I imagined I was bound to the bed frame, only capable of lifting my hips to thrust myself deeper into her.

“Yes, Mistress,” I replied to the dream girl whilst my cock throbbed and ached in reality. I was so close to coming, but Taylor’s elbow in my ribs completely threw me off my pace.

“Stop it,” she whined. “You’re disturbing my beauty sleep.”

“Does it?” I retorted bitterly. “You could have fooled me.”

“Oh, don’t start that again. I told you, we’ll have a much better sex life when I’m famous.”

“Yes dear,” I said and threw my legs over the side of the bed.

“I knew you’d see sense.” She yawned and pulled the duvet tightly around her. “Don’t make too much noise. I’m still sleeping.”

“Yes dear.” I sighed even deeper, picked out some clothes and headed downstairs to make my breakfast. It was going to be a hectic kind of day—made even worse by the fact my car had broken down and I was going to have to use public transport, a bus, in fact. What a Merry Bloody Christmas Eve, eh?

Share what you thought about Festive Handbag and earn reward points.