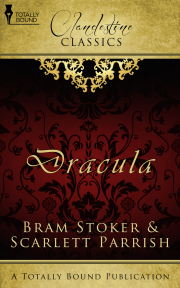 A group of friends are stalked by evil, and plagued by lust.

Jonathan Harker, a young lawyer, is sent to Transylvania to work with Count Dracula on the latter's acquisition of property in England. However, it's not long before the Count's motives are revealed to be more sinister than they at first appeared. He has no reflection, an unnatural fascination with blood, and a determination to satisfy his appetites in a new country.

Distracted by the insatiable, spectral women who haunt the Count's castle, Jonathan is trapped in a foreign land while Dracula travels to England. There, the charismatic Count seduces his way into the lives of Jonathan's friends…and his fiancée, Mina.

Also in mortal danger is Mina's best friend and occasional sleeping partner Lucy Westenra, whose suitors band together to defeat the Count. If they fail, the highly-sexed Lucy may not be the only one who falls victim to the Count's dual reign of terror and lust.

“Perhaps,” the fair girl whispered, her voice almost like the hiss of a snake, “he could serve us well another way first.”

One of the other women made a soft sound of disappointment, too soft even to be called a groan, a whine perhaps. “But it’s been so long since we…”

The third presence laughed, however. “It would be a shame not to. He’s a young man, after all, healthy. If you think he would be agreeable…?”

The fair one, still hovering so close to me that I could smell her breath, laughed, and I barely resisted a shudder. “Of course he would be,” she whispered, speaking so quietly she had to have been addressing only me. Her words were somehow not threatening, but closer to hypnotic.

Still half-asleep and wondering if this were a dream, I felt chilled, but with it that chill brought a momentary courage, and I opened my eyes wide, though supposing myself still in the middle of a vivid dream.

“Ah.” She laughed, a tinkling, musical sound, and in the back of my mind I imagined it an artificial laugh, like the one given by someone who supposed this must be how an amused woman should sound, someone entertained by a man’s compliance.

Looking back now, how guilty I feel for so readily going along with these witches’ schemes! But I truly believed myself to be in a trance of some sort, and not to be held accountable for the things I did at that time.

“Look at his skin…” The fair one’s fingertips trailed down my torso as she easily undid my shirt. She seemed fascinated by my heartbeat. Laying a palm against my chest, she smiled. “He’s so young.” A strange thing to say, as she seemed no older than I. “And strong.”

“Hurry up,” the reluctant dark-haired woman urged her and the third, more willing, laughed, teased her for being so eager, and received a frown in reply, which silenced her.

Passively, I lay still on the couch on which I’d been sleeping, and allowed the fair one to undo my trouser fastenings, assuring myself I could not be held accountable for what happened in the dream-world.

“Oh, just look at him,” the more keen of the dark-haired ones said, laughing, hands clasped together in a parody of prayer. Eagerness shone in those strangely red eyes, which I could see even at this distance.

“Any woman would be a fool not to take her enjoyment with someone so gifted.” And the fair one laughed too, clasping my erection in one hand and stroking me slowly. “You want this as much as we do, don’t you?” One side of her mouth lifted in a triumphant smirk and her grip on me tightened.

I gasped at the intensity of such feelings, how real this all was.

“Do you have a sweetheart back home, who misses you?”

Thoughts of Mina came to mind, her smiling face, and I grew harder in this woman’s hand, whimpering helplessly.

“Does she ever take you in her mouth, I wonder?” the fair one went on. “Have you ever had a woman’s tongue on you? Have you ever spilled your seed into your sweetheart’s mouth and watched as she struggled to swallow?”

A bead of moisture emerged from the tip of my prick and oh, thinking of it in such vulgar terms appalled me and yet did nothing to quell my arousal.

“Get on with it,” a voice came from one of the other two present in the room. “Hurry. You know he might come back at any—”

“I think he does.” The fair one used the tip of her thumb to spread the moisture around, coating my erection with my own fluids. “Look how aroused he gets when I mention her. You’re thinking of her now, aren’t you, my friend? Wishing she were here now, watching. Joining in, perhaps? Have you ever done this, grasping yourself in one hand and thinking of what it would be like to use her as a whore?”

“Mina.” The word, my beloved’s name, was out of my mouth before I could stop it. I wouldn’t have this woman talk of her in such a way, but it was true, oh, how true it was. How often had I imagined, while travelling far from home, doing all the things this one talked about? Loneliness had often led me to do just what she said, to wrap a hand around a painfully hard erection and bring myself to a finish while thinking of sinking myself into Mina’s warmth. All of the images in my mind were distinctly ungentlemanly but I couldn’t help them appearing.

With this fair-haired woman—I hesitated to think of her as a lady—on top of me, her grip tightening with every stroke, I had no hope of entertaining anything other than base, animalistic thoughts.

“Oh…faster,” I urged, and she laughed.

“Listen—he speaks!” She leaned over me. “You’re enjoying this more than you care to admit, aren’t you, young man?” Sitting up, she let go of me and I groaned in disappointment. Relief washed over me when I realised she’d only released her hold to adjust her skirts, to pull them out of the way so she could sink down onto me.

I entered her easily. Her arousal was plain. She was obviously a woman who enjoyed taking charge and in that moment I was all too happy to allow her to.

At first she moved slowly, only speeding up when I grabbed her hips. “Oh, yes. You like that, don’t you?” she asked, throwing her head back in obvious ecstasy. When her breathing grew heavier still, the sound drew me even closer to fulfilment. I had never imagined a woman reaching a climax so quickly, but this one, this woman whose name I didn’t even know, moved like someone who knew exactly what she wanted and would not be denied.

She tore at the ties keeping her bodice laced up, allowed her breasts to spill out, her lust growing still more frenzied. “Suck me,” she said, leaning forward, thrusting a nipple into my mouth, and I suckled on it eagerly. “Make me come.”

As my tongue played against her erect nipple, flicking then sucking harder, I felt her inner muscles tighten around me and she cried out, collapsing against me. “Oh. Oh. You were good. So very…” Lifting herself up, she sighed. “Satisfactory.”

Share what you thought about Dracula PRINT and earn reward points.