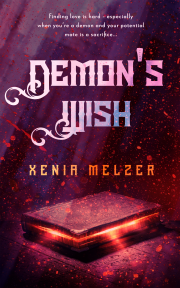 Book 1 in the Demon Mates series

Sammy is content with running his bookshop and leading a book club consisting solely of paranormal creatures. Despite the persistence of his friends, he has resolved himself to a life without romance, since he doesn’t think anybody could find him and his tendency to spill useless knowledge whenever he gets nervous attractive.

Dresalantion is a demon prince and slightly—make that majorly—annoyed when somebody persistently tries to summon him. He finally decides to show up and put the fear of Dresalantion into his summoners but finds himself rescuing their sacrifice instead.

Sammy intrigues him from the get-go, and when Dre realizes that Sammy can get him the manga he’s been hunting for months—not to mention that he refuses a wish he offered him—the sexy demon decides to get to know this fascinating man better. Much better.

Reader advisory: This book contanis scenes of kidnapping and an attempted human sacrifice.

Sammy looked around the group of people gathered in his bookstore. It was Wednesday, which meant there would be a book club meeting after closing hours. Their little group met at least twice every month to discuss books and interesting topics related to books, and Sammy loved it. It had formed half a year after he had opened his shop, Sammy’s Book Corner, and the participants had become something like a family to him, which he desperately needed after his parents had died five years before. He gazed around to make sure everybody had their stash of cookies—this time provided by Mavis and Maribell, the two witches—along with their favorite drink.

The delicious smell of freshly baked cookies mixed with the aroma of two hazelnut toffee lattes, the sharper tang of two Chai teas—heavy on the cinnamon—and his own hot chocolate before the familiar background scent of books, both old and new, made him once again congratulate himself on buying the fancy coffeemaker and establishing the little lounging area across from his cash counter. The members of their book club were seated on the four old couches around two low tables, getting comfortable.

Sammy was especially proud of this setup, since he had found all the furniture at flea markets and had given them each a do-over. The whiskey-colored leather couch hadn’t been much work. Just cleaning and treating the leather with a special balm had made the piece shine again. It now smelled faintly of beeswax, something that made Sammy crave a peppermint tea with honey every time he sat on it. The two chaises had required more effort. He had upholstered them and given them each a new cloth as well. Now customers could sit down on the colors of the rainbow to read their latest purchase. The last item was a lounger whose frame he had painted in pink then sprinkled with golden glitter for good measure. A turquoise throw made the piece stand out. One of the tables was covered in dots of various sizes and colors, and the other one had wall tattoos of Drogon and Smaug looking at each other on a black background.

Sammy was the first to admit that his artistic talent was closer to what a six-year old could produce than the fine artistry people with a real gift made, but he had done a good job with the furniture and his shop. Perhaps it was because he loved his little haven of books so much that it brought out the best in him. Except for the laptop in his office and the coffeemaker, nothing in the shop was new. Most everything had come from flea markets and garage sales, making for an interesting and charming mix of styles. Sammy had dedicated quite some time matching his books with the furniture. His antiques were stacked in open wardrobes that matched their age—or came close to it. The fantasy and science fiction books lived on shelves from IKEA, which he had sprayed silver. The romance books had found their home in old wooden wine crates that were clustered around the shop in small stacks of six to ten. Comics and manga were stashed in big boxes he had built from panoplies and painted in different hues of blue. The shop was Sammy’s idea of home, a feeling that seemed to convey itself, because most of his customers were regulars and loved hanging out in the place.

Sammy looked at his fellow book club members and adopted family and felt a brief shudder when he remembered their last meeting, where Amber the banshee had insisted on providing the baked goods. She might be four hundred years old, but just like every other banshee in the world, her baking skills were those of a blind man who had to find his way in a kitchen with both arms tied behind his back. Nonexistent. According to Emilia, the vampire in their group, this had something to do with their magic, which allowed them to pinpoint the exact time of death for every person. Apparently, the mixture of being able to look into the future without upsetting the balance of time and still warning people of their impending end didn’t go well with any kind of cooking. As to why exactly that was, Emilia couldn’t—or wouldn’t—tell. As the only human in a group of paranormals, Sammy had gotten used to not knowing everything. There was too much going on and he had learned soon after stepping into this world that ignorance truly was bliss in many cases where paranormals were involved. He would have preferred to know about Amber’s anti-talent in the kitchen, though, before he’d accepted her offer to bring snacks.

Per group vote, Amber had been banned from ever bringing sweets to the meetings again, even though Jon, the zombie living in the cellar under the bookshop, had later confessed to Sammy that the stone-hard lumps weren’t that bad, once one managed to get through the crust—the burnt, black crust that may or may not once have been sugar. Sammy swallowed hard. Just remembering the taste made his stomach revolt. And he hadn’t even been able to get to the core of the—he tried to find a fitting word for the deadly pieces of ballistic bakery and finally settled for ‘pastries’. Declan and Troy, the two werewolf alphas, as well as Emilia, had sharper teeth and more strength in their jaws, yet the looks on their faces when the crust gave way had been disturbing, to put it mildly.

“I don’t see what’s so different about these,” Amber declared with a pout while holding up a perfectly shaped chocolate chip cookie. Her pixie cut with the neon green hair went well with the huge, sapphire-green earrings, the thick golden chain with various amulets dangling from her neck, the five leather bracelets with Celtic runes etched into them and the approximately twelve rings she was wearing on her fingers. Compared to her jewelry, her outfit was plain—black skinny jeans, black sneakers and a black shirt with a sparkling unicorn on it, declaring Eat My Stardust, Suckers.

“The difference, my dear Amber, is that these cookies can be eaten without costing you a tooth. I’m so sorry to break this to you, but your baking skills are what I imagine Terry Pratchett had in mind when he created dwarf bread.”

Declan put one of the cookies in his mouth, munched on it with an expression of pure bliss on his ridiculously handsome face and gulped it down. He and Troy, who wasn’t there on that day due to business, looked like everybody’s wet dream. They were tall and had angular faces with chiseled jaws and sharp cheekbones, broad shoulders, slim hips, long, muscular legs and hair so thick and healthy that Sammy knew women would murder for it. Apparently, the good looks were part of the genetic makeup of shifters, but Sammy still found it almost offensive how perfect Declan and Troy were. Like two sides of a coin, one dark and dangerous, the other blond and…well, dangerous, they were a constant temptation for women and men alike. When they’d first joined the book club, Sammy had had some disturbingly hot dreams about threesomes with them and it had taken him almost four months until he had been able to put them firmly in the ‘friend zone’. It had helped—once they’d felt comfortable enough to relax during the meetings—to see their true selves. Because, no matter how perfect their looks were, the two werewolves were almost annoyingly arrogant and overconfident, as was typical for alphas—or so Sammy had been told by Jon. Their saving grace was a great sense of humor and their unusual choice of favorite book—Pride and Prejudice. After they had confessed this, nobody in their little circle was able to take them too seriously anymore, because how could somebody who loved the perfect book be a bad person? The posturing was just that—a façade to frighten potential enemies away—and the paranormal world was full of those.

“Dwarf bread?” Amber lifted one of her meticulously plucked eyebrows, a hint of steel in her voice.

“Don’t take it to heart, dear. If you want, you can come over and maybe we can teach you how to get them right.”

Maribell smiled at Amber and patted her hand. The witch looked like a nice, elderly lady with her flower-print dress, the square handbag and the perfectly coiffed bun at the back of her head. Her thick black hair was infused with gray strands, and around her almond-shaped eyes—a heritage from her Asian father—laugh lines softened her features. Sammy knew better, though. Maribell reminded him of his first-grade teacher, Mrs. Smithson, who had been able to shut unruly pupils up with one stern look. Those who inspired her displeasure quickly learned that there was nothing worse than the wrath of a teacher provoked…except for the wrath of witches. And with Mavis and Maribell, the first lesson was also the last.

Xenia Melzer was born and raised in a small village in the South of Bavaria. As one of nature's true chocoholics, she's always in search of the perfect chocolate experience. So far, she's had about a dozen truly remarkable ones. Despite having been in close proximity to the mountains all her life, she has never understood why so many people think snow sports are fun. There are neither chocolate nor horses involved and it's cold by definition, so where's the sense? She does not like beer either and has never been to the Oktoberfest – no quality chocolate there.

Even though her mind is preoccupied with various stories most of the time, Xenia has managed to get through school and university with surprisingly good grades. Right after school she met her one true love who showed her that reality is capable of producing some truly amazing love stories itself.

While she was having her two children, she started writing down the most persistent stories in her head as a way of relieving mommy-related stress symptoms. As it turned out, the stress-relief has now become a source of the same, albeit a positive one.

When she's not writing, she translates the stories of other authors into German, enjoys riding and running, spending time with her kids, and dancing with her husband. If you want to contact her, please visit either her website, or write her an email.

I received a copy of Demon’s Wish by Xenia Melzer from Pride Publishing in exchange for an honest review. I have a soft spot for people who own bookstores. In another world, I would have wanted to ma...

Share what you thought about Demon's Wish and earn reward points.

Other books in the Demon Mates seriesView Series Page