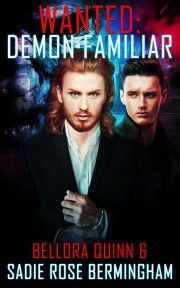 Book 1 in the Wanted series

Sometimes when you don’t know what you want, life gives you what you need.

When Neil Markovic witnesses the murder of his mother by Bone Men, his world is thrown into turmoil. On the run from the assassins that killed her, his sorcerer father and the police, Neil finds help in the form of a tall half-fae alchemist named Malachai. Mal seems more accepting than most of Neil’s demon bloodline but curiously immune to his charms.

Malachai Valentine, disgraced scion of a noble leprechaun clan, back in the Old Country, is happy living as an anonymous scrap dealer. Using his talent for alchemy to make fuel and potions, most days he doesn’t even think of his ruinous past. When a scared young man with a fancy car crashes into his life, at first, Mal thinks he can do without the hassle. But as Neil begins to get under his skin, Mal reassesses his hopes and ambitions.

Harassed by megalomaniac fae and stalked by sorcerous killers at every turn, Malachai and Neil must fight to be free, and to find what they both always wanted.

Neil set the bushel of summer squash into the panel van with the rest of the produce ready to go to market tomorrow morning and jumped down. Mr. Yaetz patted him on the back. “That’s the last one. Good job, Neil. You best head home now. Don’t want to get caught outside the wards after nightfall, ’specially not in that fancy car.”

Neil stifled a wince and forced himself not to look around to see who might have overheard the mention of his ‘fancy car’. Mr. Yaetz didn’t mean anything by it, but the car was a sore point with his co-workers at the small greenhouse and urban farm lot. None of them had their own vehicle, much less a sleek convertible sports car. Explaining that it was his mother’s, not his, hadn’t stopped the digs about his ‘slumming with the common folk’ or brought him any closer to the camaraderie the rest of them shared.

“Thanks, Mr. Yaetz. I’ll see you tomorrow,” Neil told him and turned toward the front lot. He glanced at the horizon automatically, judging how much time he had. About forty-five minutes, maybe an hour. More than enough for the short drive home. He wasn’t likely to come across any shadow beasts here on the outskirts of the city but a pack hunting farther afield was always a possibility. Of course, if he did run across shadow beasts, they would have to catch him first and the Maserati was both fast and agile.

Neil slid behind the wheel and the powerful engine purred to life. With the sun slowly sinking behind him, he swung the car out onto the road and headed for home.

As expected, Neil pulled into the driveway with plenty of daylight left and no encounters with any creatures that came out after dark. Climbing the front steps, his thoughts preoccupied with a shower and dinner, he almost missed the broken seal on his front door. He stopped cold. The warding glyph, usually a subtle shimmering gold, was inert, dull gray and cracked with lines of black. A sick knot cramped in his belly and Neil pressed his thumb down on the latch and pushed the door open but hesitated on the threshold.

He listened. No answer.

Neil stepped into the foyer and slowly moved into the hall. A picture had been knocked off the wall and the broken glass from the frame glittered in the fading sunlight streaming in behind him.

Something crashed in the kitchen, the metallic clatter of pans hitting the tile floor. Neil ran in that direction.

His mother screamed, “Neil, get out! Get out!”

Heart hammering, he skidded into the kitchen. A black-clad, hooded man held on to his struggling mother. Another man stood next to them with a curved knife in his hand—his eyes were flat black and icy cold as they slid over him. Neil rushed them, yelling, “Get away from her!” The man with the knife lifted his free arm and flung the outstretched fingers of his empty hand at him. Neil hit the stop spell so hard it jarred him from teeth to toes, knocking him on his ass.

He lifted his head in time to see the man who had floored him lift the knife and draw it down the side of her throat and across her shoulder in two professional, vicious slashes. The other man let her go as her eyes went wide and her hands flew up to clutch at the wounds. The blood didn’t spray everywhere like it did in the movies. It welled up in a gush of red that soaked the front of her shirt as she choked and gasped then fell down on her knees.

“Mom! No!” Neil scrambled to his feet. The two men moved toward him in unison as his mother crumpled, face down on the floor. Her body sounded like a wet rag hitting the tiles and a shocking pool of red spread under her.

“Take him,” the one holding the bloody knife said. His voice was low, emotionless and without accent, like an automaton in one of the old films they occasionally streamed when the comms satellite was functioning.

On autopilot, Neil grabbed the pendant that hung on the chain around his neck and ripped it off, throwing it on the floor. The man reached to stop him, but it was too late. The glass pendant shattered and a wall of noxious smoke rose between him and the killers. It wouldn’t hold them long, a minute if he was lucky. Probably less. He turned and ran back down the hall, fleeing the house.

He stumbled down the steps and fumbled the keys from his pocket, hitting the lock button. He yanked the door open and was shaking so badly he dropped the keys on the floor.

“Fuck! Fuck!” He reached down and his fingers just touched the ring as the killers came running out of the front door. Neil grabbed the keyring and jammed the right key in the ignition. For one horrible second, he was sure it wouldn’t start even though he’d just driven the car home. The engine turned over as smooth as a kitten’s purr and he slammed the shifter in reverse just as the man with the blade grabbed the driver’s door handle. Neil put his foot down on the pedal. The tires squealed and the car shot backward down the driveway and into the street.

Blood pounded in his ears, almost drowning out the engine sounds as he threw the car into drive and floored the gas, clutching the steering wheel hard enough to turn his knuckles white. He looked in the rear-view mirror as he sped away. They would come after him. He turned at the next intersection. Then turned again. And again. He tried to focus on what to do next but all he could see was the shock and anguish on his mother’s face before she fell, and that bright pool of red spreading out under her. He looked in the mirror again but saw no sign of the men that had killed her. That didn’t mean anything. They could come, he knew it. He was heading out of the city following pure instinct, but now he slowed the car for just a moment. At the next turn, he doubled back the way he’d come.

Out of the city might seem safer, but it wasn’t. He had little money and the car would take him only so far. He needed resources.

He forced his fingers to relax on the steering wheel but his hands still shook. When he took a breath, it was shaky too. The red had been so stark against her blonde hair. Her eyes…had they been blank before she fell or after she hit the floor? No. No he couldn’t think of that now. He raised and hand and swiped at his wet cheeks.

Bone Men. Their name whispered across Neil’s mind in his father’s voice, from one of his many lessons. Assassins. Twisted by the sorcery that enhanced them, marked by the lives they took. Had she been their target? Was her death retribution for something his father had done? Or…or were they there for him?

His mind raced as fast as his pulse and the car he was driving. He took another deep breath and eased his foot back off the pedal a few degrees. He needed a clear head. He needed a plan. But first he needed somewhere to hide. Instinct told him to find someone he trusted, but his training overrode that idea. He could hear his father’s voice in his ear again. Trust no one, Nielob. If they come for you, go to ground. Speak to no one you know. Hide and wait. I will find you.

Not if he could help it. If he had his way, he’d lose both the Bone Men and his father, for good. The car would get him a good distance but he couldn’t keep it. It was traceable. He’d drive into the city, find someone he could sell the car to for scrap and use the money to get a ticket to as far away as it would take him.

He couldn’t take the car directly to a salvage yard without a title, too risky. He needed a fence. Months ago, while he’d been watering seedlings at work, he’d overheard Carl bragging about how his uncle was going to get a real car, one with a combustion engine. No one had believed him and Carl had gotten mad. Insisted his uncle knew a guy that dealt in contraband autos in the city. Hammersfell Road, next to the old Ackard Motors factory. There was a warehouse where they had raves. The fence organized them. Neil had no way of knowing if the bragging was just lies, but he had filed the information away anyway. His chin gave an odd quiver and the tightness in his throat squeezed hard enough to choke him. No. He couldn’t give in to tears now. He couldn’t afford to let out the sobs that threatened him. A safe place first. The grief tasted of bitter acid and wanted to strangle him, but he swallowed it down and kept going.

Originally hailing from Detroit Michigan, Bellora now resides on the sunny Gulf Coast of Florida where a herd of Dachshunds keeps her entertained. She got her start in writing at the dawn of the internet when she discovered PbEMs (Play by email) and found a passion for collaborative writing and steamy hot erotica. Soap Opera like blogs soon followed and eventually full novels.

A storyteller since before she started school, Sadie also enjoys reading, photography, live music and long walks on the beach.

Sadie has worked as a bookseller, a pedigree editor for the racing industry and a local and family history researcher. Originally from the north of England, she has been working her way across the UK ever since. She currently resides on the south east coast with her long term partner, where she hopes to buy a mobile home and establish a whippet farm.

Share what you thought about Demon Familiar and earn reward points.

Other books in the Wanted seriesView Series Page