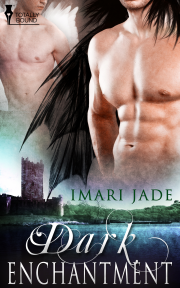 On the eve of his 521st birthday, Lord Bevan decides to kick up his heels, venture out of the fairy mound and visit a local Irish pub to taste ale for the first time. He persuades his two best friends Eoin and Niall to accompany him for some harmless fun, but once inside the pub, the three young fairies decide to try whisky too. Bevan, the prince of all pranksters, ends up enchanting the entire pub while dancing an Irish jig, gets into a fight with a couple of townies then summons the powerful Sluagh to attack the men while he and his friends flee back to the fairy mound.

King Oberon has run out of ideas on how to punish the young Lord, so he enlists the help of Bevan's godfather, Colan de Paor. Colan hasn't seen his godson recently and finds himself unable to keep his thoughts—and hands and lips—off the handsome, newly matured Bevan. So instead of punishing Bevan, he takes Bevan to his bed. At his wit's end, Oberon sends Bevan to the Seelie Court to spy on Queen Tatiana and to stop her from taking the American fairy Prince Christian Garvey to her bed.

Oberon wants Bevan to keep Tatiana away from Christian. Tatiana plans to use Christian to get her pregnant because Oberon cheated on her. Bevan and Eoin lust after each other, and Colan just wants to keep Bevan to himself. But will everyone's plans backfire when Christian gets his first look at the gorgeous blond Bevan?

"What sort of devilment do you have planned for this evening, Lord O'Neil?" Niall Shamus asked Bevan as they sneaked out of the fairy mound at twilight on the night before Nollaig. Their other friend Eoin McMurty followed them through the narrow hole beneath the hawthorn tree. Snow fell, covering all the greenery and adding to the camouflage.

Bevan looked around, making sure no humans were around. "We're going to a pub. I have reached the age of maturity, and I want to see what all the fun is about."

"Yes, but I haven't been old enough to drink until now. But first we need to look the part of adults." Bevan waved his hand in front of his face and down his body to change his appearance. His silver wings disappeared, he added another three inches to his five feet, eleven-inch frame and changed his blond hair to black.

Bevan clad his slender body in black jeans, a black T-shirt, and boots. He added a heavy, short black jacket with fringe to ward off the bitter winter wind of the North Atlantic current.

"Let me try," Niall said. Both Niall and Eoin had celebrated their birthdays at the beginning of the year. Though older, they always allowed Bevan to take the lead with everything. After getting rid of his black wings, Niall dressed himself in a pair of blue jeans and a light blue sweater, black knee boots and a dark blue corduroy jacket. He tucked his long black hair under a dark blue knit cap. "Your turn," he told Eoin.

Eoin, the shortest of the three, stood out in a crowd with long red hair and evergreen eyes. He too got rid of his red wings, changed his hair to a darker auburn colour and lightened his eyes to a human shade of green. He chose brown leather pants with a matching jacket, and added a black shirt and boots to complete his look.

"Look out, Galway, here we come!" Bevan shouted as they left the seclusion of the trees and headed down the hill into town.

Bevan shied away from any of the traditional pubs in town, looking for a hipper crowd. He'd heard human music before and liked something called rap and easy listening music. King Oberon would have a fit if he knew Bevan knew of such things. Oberon tried to keep them ignorant of the real world, but Bevan had a thirst for knowledge and took off every chance he could to play pranks on the humans and to investigate things that piqued his curiosity.

They finally found a pub suitable to his tastes. They entered, making a lot of conversations pause in mid-sentence. Niall quickly found them a booth and he and Eoin slid in while Bevan walked up to the bar to order.

A bonny young female bartender came to take his order. "What will you have?"

"A pitcher of ale," Bevan said. He paid her. "And keep it coming." He smiled at the woman and she trotted off to get his order. Bevan returned to the table with the ale and three glasses.

Niall smiled at him. "You didn't have to use your charms on her."

Eoin looked at him with big green eyes. "Dude, you're so cool."

Bevan chuckled. They'd never tried anything so brazen before and he planned to milk it for all it was worth. "I don't need tricks to get girls." He spoke the truth and they knew it. The young women in the palace all tried to get him into their beds. Bevan tapped his foot to the beat of the music. Young people danced on the floor away from the tables. He looked around, itching to join them. He liked to dance and was considered one of the finest dancers in the Unseelie Court.

The bartender caught Bevan's eye when he looked her way. She rewarded him with a wink this time, along with a smile.

Bevan nodded. He wasn't interested in some pub chick. He sampled the ale. Niall and Eoin waited to get his reaction. Bevan lowered the glass slowly to tease them. "Gents, this is the best thing I've ever tasted."

Niall and Eoin lifted their glasses, toasted each other and sampled.

Bevan shook his head at their foolishness. He actually saw Eoin's little body shudder with delight. They quickly polished off their first glass and Eoin poured them another.

Niall walked over to the bar for another pitcher. He used a bit of glamour to enchant the bartender.

She turned her attention to him. "You're cute," she told him. "Would you care to dance with me later?" She twisted the ends of her blonde hair with the fingers of one hand.

"Sure," Niall said. "When does your shift end, Emily?"

She wore her name on a little tag above the left breast of her green uniform. "In ten minutes." Emily waved and disappeared into a door just off the kitchen.

"Are you sure you can handle her?" Bevan asked with an impish grin.

Niall nodded. "She can't be any different than one of our females."

Bevan remembered when Niall had lost his virginity. He had boasted about it for weeks.

Share what you thought about Dark Enchantment and earn reward points.