Deciding that finding Caitlin and bringing her home is the only thing he can do, Carson embarks on a quest that ends up changing him as much as Caitlin seems to have changed herself. Coping with the knowledge that he can’t share with the rest of his family—yet—Carson writes thinly veiled autobiographical stories to help himself better understand Caitlin and why she left home.

And, while using every opportunity he has to find Caitlin and talk to her, Carson’s typical teenage life goes on. Girlfriend. Family. School. Friends. Things he did in the past that he’s not too proud of. It’s a busy senior year, but he’ll count it a win—if he can locate her, learn exactly what happened on the day she left and convince Caitlin to come home.

My sister Caitlin screams—I can hear her all the way up in my room on the second floor.

She stayed out all night, again. Now, she’s back in the house and the endless arguments within my family, mostly between Dad and Caitlin, rage. It’s another battle in their ongoing war, but I seem to be the only casualty.

Once Dad stops, Mom takes over. I leave my room and move to the top of the stairs.

“We were so worried,” Mom says. Her words bounce around the high ceilings.

“Don’t lie to me,” Caitlin shouts back. “Nobody in this house cares about me.”

I want to shout from the top of stairs, ‘I care, Caitlin. I love you!’, but say nothing.

“What’s this morning’s melodrama, Caitlin?” Carol asks. The contempt in her voice rises like stench from the garbage. Unlike me, who tries to clutch onto Caitlin as she slips away, Carol kicks her to the curb.

“If you want to stay here, you’re going to do things our way!” Dad yells. He’s shorter than me, only five eight to my six one, but he yells with the fury of a man over seven feet tall.

“I’m not perfect like Carol. I’m just a fuck-up!” Caitlin shouts. “So I do what I want and there’s nothing any of you can—”

“Tossing your daughter out on Christmas,” Caitlin says.

“Your actions, your consequences,” Mom says.

“I messed up. I want a second chance,” Caitlin says.

And now Mom and Caitlin are at it, with Carol adding snide comments like a dog lifting his leg. “Seriously, Caitlin, you are such a cliché—the messed up middle child, I mean—”

“And that’s what I hate the most!” Caitlin shouts back. And it’s on between the sisters.

“I can’t live like this anymore,” Dad says, his words fading, followed by heavy footsteps.

“Daddy, where are you going?” Caitlin shouts. More steps, a door opens, closes.

“Caitlin, we ground you. You ignore it,” Mom says. “We show we love you and you look at us with such hate. I don’t know what else we can do since you won’t change.”

Caitlin mumbles something in return. I hope they are words that save her, save us.

“If we can’t love you or control you, then we can’t have you live here,” Mom says.

“I’m so sorry, for everything,” Caitlin says, I think through tears. “This time I will change.”

But her words are cut short by the sound of the door opening then heavy footsteps. Dad’s probably back. It’s his last chance to say something or do something to save his family, but the only noises are shouts from the women. Mom’s the loudest.

“Daddy, what are you doing?” Caitlin asks. Carol yells something similar.

“Caitlin, here’s my pistol. Take it from me,” Dad says in a stone cold voice. “We can’t live with you out of control like this. Take the gun and end this! Either kill yourself or kill us.”

Then there’s silence for ten seconds.

I hear nothing except the beating of my heart.

I want to run downstairs, save my family, but I’m frozen in the heat of the moment.

The silence of a life and death decision is the loudest sound in the universe.

Finally Caitlin screams, “I hate you,” and there’s the metallic clicking sound of a trigger against an empty chamber. I hear the sounds, I can’t see the faces. I can only hear questions spinning in my head one after another. Who was Caitlin speaking to? Who held the gun? Did that person know the gun wasn’t loaded? Who pulled the trigger? Where was the gun pointed?

Seconds later I hear another loud clicking sound—that of Caitlin’s always high heels against the hard floor. A door slams, and I worry I’ll never see the sister I love so much again. 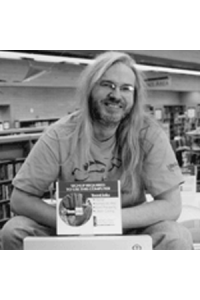 Born in same hometown as Michael Moore, Christopher Paul Curtis and Jon Sczieska (Flint, Michigan), Jones started his writing career at age eight with an article for a New York City-based pro wrestling newsletter. Since that time he has published over two hundred book reviews, one hundred plus articles, fifty or so essays in reference works, nine professional books for teachers and librarians, seven young adult novels and two nonfiction books. His current focus is reluctant YA readers, with twenty titles published since 2013, four due in fall 2015 and another four in spring 2016. In spring 2016, he will also publish a nonfiction book for teens on the changing nature of teen incarceration.

Patrick teaches an online Young Adult Literature class at Metro State University in St Paul, MN.  Assignments in this class are due on Tuesday mornings so he can watch professional wrestling on Monday nights.  Some things change, some don’t.

Clicked hooked me from page one, with the easy flow of the author's words, to the quick pacing, to the addictive quality of the storytelling. As a budding writer, Carson's narration is witty and cleve...

Share what you thought about Clicked and earn reward points.