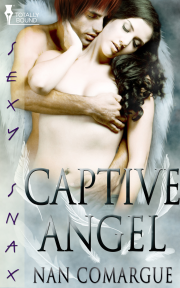 Warrior-angel Pax is willing to risk everything to save his beautiful mate Astrid from a salacious demon's clutches—even if it means descending into Hades.

The ongoing war between Haven and Hades has separated angelic couple Astrid and Pax, who are both soldiers in Haven's army.

Pax believes that Astrid is dead and dreams of revenging her killing, but the havenly powers won't even let him return to combat. Widespread disturbing nightmares and a mounting casualty list, restricted mainly to female angels, make him desperate to find out whether the tides of war are shifting—but the truth of what is happening to the female angels at the hands of the demonic is even more shocking.

Astrid is being held in brutal captivity by demon warrior Cathal, who is so powerful that his unending sexual appetite could kill a human female, and she is close to succumbing to his dark desires.

Can her true love, Pax, save her?

Can she save herself?

The Dominion was giving a lecture to a roomful of bored underlings, mostly Powers mixed in with a minority of Principalities, and his statement was met with groans from half of the gathered crowd and applause from the other half. More than a few angry looks were sent his way but those glances were quickly dispelled by the enormous orb of light sitting atop his sceptre.

No lower order of angel dared cross a Dominion.

“This is more true now than ever before. No male must be jealous if his female chooses to share her love with another. In such cases, the female is showing great generosity and the Seraphs always look kindly upon acts of charity. Especially in these trying times.”

Lately, the shortage of eligible female Powers had raised tensions throughout Haven. The Powers were warrior angels and most of their ranks had gone to fight in the latest war with the Demonic, where many females had been killed or captured, as if the Demonic forces were focusing on the female angelic soldiers above all others. As a result, long-standing mating unions were being forced to give way to new groupings including a single female angel and two or more males. And the original males didn’t like it one bit.

Pax, standing off to one side, didn’t groan or applaud. What did a male who had lost his only female care about multiple or other unions? He no longer had a female to share.

His only concern was the war against the Demonic—the swelling league of bastard demons who had captured and killed his beloved.

His heart ached for her even now, many human seasons since her slaying at the hands of the strongest of the Demonic warriors, Cathal. Although he knew that it was not worthy of his position in the angelic hierarchy to grieve so strongly for a mate, Pax could not help himself. Astrid had been his mate since both of them had been mature enough to be granted the honour of choosing. They had fitted together so well, two sides of the same bright coin. Even now, he could see her beauty—her startling blue eyes, the faint rose light of her skin, the lustrous blue-black of her flowing locks. And even now his loins tightened with desire for her. Beneath his short robes his cock began to harden, lifting the soft white fabric several inches away from his body.

Though many females had offered their companionship—most angels were more than happy to share on a temporary basis—Pax had refused every one. None could compare to Astrid in beauty or in strength. The angels who had brought their messages from the battlefield had told him of her courage and bravery against the overwhelming forces of the Demonic.

Frustrated physically, he had exercised his body into even better shape, waiting for his turn at battle. His arms and legs were like steel, his deep chest as strong as an Earth oxen’s, his hands and feet as nimble as ever with a bow and arrow or when wielding a sword. Only his cock received no exercise, yet that seemed to make it more insistent, more turgid every time the image of his dead mate came to his mind. It was as if his cock was still waiting for her to return, for her sweet pussy to bring him back home.

But it would never happen.

Never again would he feel Astrid’s slender limbs curved around his body, her lovely body as taut as a bowstring as it pistoned atop his, driving them both mad with her insatiable hunger for his thick manhood, until he spewed inside her hot sheath and she collapsed against him, her vaginal walls clenching to milk him further.

Every night he dreamt of her, mingling his fantasies with memories of their time together. So brief, it seemed now, in retrospect.

How lovely she was in those dreams, as she had been the first time he’d come upon her in training for battle. How well she’d fought beside him in those mock combat exercises and how beautifully she’d pretended to be slain when someone on the other side had taken advantage of a slip and fall to thrust his sword into her slender body.

Pax had helped her up afterwards and they had attended the final lecture together. From that point onwards, they had become inseparable. Especially in bed.

His favourite dream of her was of that first night after her pretended death, of her mouth meeting his in a desperate kiss, as if it and only it could revive her. Their lips had clung together in the shadow of the old lecture hall. They’d barely been able to walk back to her apartment, their arms knotted around each other’s waists, their mouths meeting every other step in hot, hungry kisses.

Nan Comargue takes the reader deep into the war between Haven and Hades...The heavenly powers have no idea that the forces of evil are using their own fighters against them to create an army that will...

Share what you thought about Captive Angel and earn reward points.