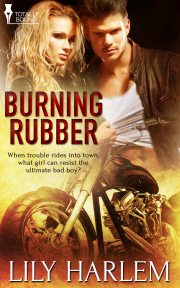 When trouble rides into town, what girl can resist the ultimate bad boy?

Handling men isn’t an issue for me. I’m not a girly girl and my best friends are the machines I spend my days fixing, tweaking and servicing. So when the Wild Angels roll onto my forecourt and need my help, I’m happy to be of assistance.

But I’ve always been a magnet for trouble and when the leader of the pack, Gid, questions my ability, I can’t help the sassy backchat. Seems it doesn’t bother him too much and before I know it, I’m climbing onto his beast and hanging on for the ride.

Bad ass guys like him don’t come without baggage, though, and it seems he wants to get rid of mine. Who am I to complain when it means revenge is hot, his body is hotter and we leave a trail of burning rubber as we head into the sunset? Biker girl, me? I guess it’s in the blood.

Publisher's Note: This story has been previously released as part of the Wild Angels anthology by Totally Bound Publishing.

Johnny Cash’s throaty voice filled the mechanic shop, filtering beneath the pick-up I was working on. The engine had blown a gasket, an easy enough fix, but I’d needed to wait for the part to be delivered before I’d been able to get on with the job.

Son of a bitch owner was hassling me—kept coming in and staring at my tits and demanding to know when it could be collected. Not my fault he’d bought a fancy car and we lived out in the sticks. This neck of South Dakota wasn’t exactly top priority for deliveries, and the part had taken three days to arrive.

I reached for a spanner. Idiot shouldn’t have hired a female mechanic if all he was going to do was moan about my gender forevermore. Didn’t seem to matter to him that I was the best damn engineer for miles around.

The song ended and the DJ started to rattle on about some festival in Denver, miles away and not something that interested me. I wasn’t a typical girl. I liked machines, shiny big bikes and cars that purred. Make-up and cocktails and dancing at parties wasn’t my thing. Give me speed and danger and horsepower—that’s what fuelled my desires.

Suddenly the radio flicked off.

“Jesus, Sandra, what the fuck are you doing?” Bruce shouted.

A hard pain hit my ankle. He’d kicked the only bit of me sticking out from beneath the car. Bastard. But luckily I wore steel-toe capped boots that went well over the base of my leg.

“Asshole,” I muttered, scooting out on my support trolley.

He stood above me with his hands on hips and jowls wobbling. “Why haven’t you finished this fucking gasket yet?”

“Because I’m out here on my own,” I said. “I had two services to do this morning, for locals, and a guy stopped in with a slow puncture that I fixed.” I glanced at the big black-and-white clock on the wall above a shelving unit of spare parts. “And I should be heading home but I’m staying to get this done, out of the goodness of my heart.”

“Good fucking job.” He wiped his mouth on the back of his hand.

I could smell the alcohol from here.

“Well, it’s not like you’ve got anything to go home for, is it,” he added.

I ignored him. Misogynistic bastard wasn’t worth the emotional effort. Damn, I’d really have to find another job. I’d had enough. And it wasn’t like I was tied here anymore, not now Nan had passed two months back. I’d looked after her for three years and that’s what had kept me working for Bruce and putting up with his abusive shit. Now her finances were sorted, all I needed to do was sell her small house and the world would be my oyster.

Bruce hiccupped and wandered off, apparently forgetting that I was lying on the floor.

I shook my head and rolled back beneath the car. It wouldn’t take long then I could go home and make a meal for one. It still hurt that Nan was gone. She’d been as much of a support to me as I’d been to her, but she’d lived to a grand old age and I had a million happy memories.

I set to work on the gasket that was proving fiddly but it wouldn’t defeat me.

As his faltering footsteps faded, I relaxed. I’d come to enjoy this time of the day, when he’d gone and it was just me and the machines. They were good company—they spoke to me with creaks and groans, they smiled at me with the shine on their bodies and they enthralled me with their resilience and power.

That was all fanciful thinking, of course. They were made of steel and a whole load of other stuff that wasn’t capable of thought, but they were predictable and didn’t let me down. One day I’d own something fabulous, a Ducati maybe or a souped-up streetcar. Something with style and panache, that had attitude and could hold its own.

But not around here.

What can I say but Simply Hot and Fantastic. Loved everything about Sandra and Gid's story. When Gid and the Wild Angels ride into town Sandra has just met her match and the chemistry is instant. If you...

Gid is an impatient, determined man. And he wants Sandra. Gid’s as captivated by Sandra's skills as she is by his masculinity. Expect lots of heat--and I don't just mean in bed. A quick read with an...

Share what you thought about Burning Rubber and earn reward points.

In Burning Rubber my hero is Gid. I say hero but he flirts with being an anti-hero if I’m honest. He’s not one for obeying rules and certainly has an air of vigilante about him. He’s was a complex character for me as an author to write about. Gid is a break from the norm, he’s not sweet and romantic, he doesn’t wine and dine and send red roses. He has much more unique ways of wooing the heroine, Sandra and some of them are pretty extreme and well outside the boundaries of the law.

These stories make for a very gritty read. Did you enjoy writing a non-traditional romance?

Do I enjoy writing non-traditional romance. That's a Yes, a big YES! I really do, I find it more and more compelling the more novels I write. I want to create characters that like people in real life don't always play by the rules or make sensible decisions. I'm not saying stupid, mean or irresponsible characters, just more real and less formulaic. People make mistakes, people feel vigilante, they let passion rule their thoughts and couples from all walks of life hook up and make it work. I want readers to be able to put themselves in the head of a character and understand choices they wouldn't make themselves but still can invest in. That to me, is escapism.