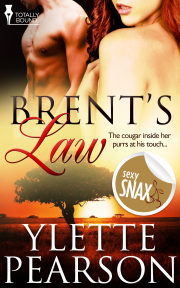 The cougar inside her purrs at his touch, but is she willing to pay the price for succumbing to temptation?

Thirty-eight-year-old Samantha Owen worked hard to earn the distinction of being the most respected divorce attorney in Sandton, South Africa. Ethical and politically correct conduct ensure she remains at the top of her game and in high demand by rich and influential clients.

When the arrogant and sinfully rich international rugby player, Brent Russell, saunters into Samantha’s office, he evokes flashes of satin sheets and tangled bodies in her mind. But, despite resembling a Greek god and setting her body on fire, he is off-limits. Twelve years younger than her and her client’s soon to be ex-husband, Samantha could be disbarred by just talking to Brent without his attorney present. Besides, Samantha never dates married men—ever.

Used to getting his own way and determined to have her in his bed, Brent embarks on a relentless pursuit of Samantha. Despite Samantha returning his gifts and refusing to consider having dinner with him, he slowly erodes all her objections to an affair between them. Only when he uses his fame to finalise the divorce while Samantha is on her annual leave, does she agree to accompany him for a holiday on his farm at Komatipoort—a decision that could cost her both her reputation and career.

Samantha Owen stared at the petite blonde woman seated opposite her. The woman sounded sincere enough, but something kept tinkering at the back of her mind. As an attorney, she’d learnt to heed those warnings and now the bells chimed like those on top of the church.

“Amber, are you sure you’ve told me everything? I don’t want any surprises during our meeting this afternoon.”

The blonde woman flicked her Barbie-doll hair over her shoulder and pouted. “I told you. The two-timing scum needs to pay. It’s not as if he can’t afford it, as you well know. He’s just being spiteful.”

Heavens, was she ever so young and arrogant? Samantha suppressed a sigh. Sometimes she wondered if her reputation of always being ethical and fair in divorce cases wasn’t too much of a burden to bear. Clients like Amber Russell would tempt the patience of a saint. Refusing the more than generous settlement offer the other party had made, reeked of spite on her side, not her estranged husband’s.

“Fine, but you know I will withdraw as your attorney if they spring any surprises on us today.”

Normally Samantha couldn’t care less about her client’s indifference, but she’d had a long day, with this particular client sauntering in from the streets of Sandton too many times during the past week. Right now, she’d rather be at home, barefoot and cooking for a bunch of students who only wanted their next warm meal from her.

She glanced at her watch. If the attorney for the defendant stayed true to form, he and his client should arrive within the next three minutes. Although Rob Bentley appeared flustered and absentminded, Samantha had quickly learnt that it was all a façade. The attorney had a razor-sharp mind that could sift through the muck in any divorce case to find the core of the dispute. It was always a pleasure to deal with him on the opposing side.

“Let’s move to the conference table, shall we?”

After gathering her documents, she walked around the large mahogany desk towards the round wooden table in the corner. She’d purposely placed the conference table far from the wall-to-wall windows so the view over the city couldn’t distract them. She chose the chairs facing the window for herself and her client, leaving her opponents looking at a painting of two wolves at loggerheads.

A discreet knock sounded on the outer door and Samantha flattened her palms over her tight fitting pencil skirt then buttoned her jacket. With a final glance at her client fiddling with her iPad, she reached for the door.

She shook hands with the attorney and waved him towards the conference table. “Please have a seat.” Then she craned her neck to greet her client’s husband and the bottom dropped out of her stomach. Vivid blue eyes stared straight through her and jet-black hair curled over the collar in his neck. The corners of his mouth tilted upwards as the same blue eyes glided like a caress over the length of her body. Like he’d just unwrapped a new present, he took his time inspecting her grey jacket, white silk blouse, pencil skirt, stockings and lastly her two-inch heels. His tongue moistened his lower lip as he focused on the traitorous tips of her breasts jutting through the thin material of her jacket. Under his scrutiny, they puckered to an almost painful hardness.

Who let this man out without a health warning? Dressed in a dark sports jacket, which he filled to the brim, formal black pants that contributed nothing to hide the muscled thighs underneath and a navy shirt without a tie, he epitomised what Samantha thought a Greek god should look like. She wiped her palm on her skirt and swallowed at the sudden dryness in her throat.

When their eyes met, her body tingled and heat suffused her face. The unconcealed want in his gaze clamped her chest in a vice and sent her pulse rocking. Breathe Samantha, this is no time for thirty-eight-year-old attorneys to consider playing cougar. Besides, he is your client’s husband, for heaven’s sake. She forced air into her lungs and her mind cleared a little.

He stuck out his hand. “Pleased to meet you, Miss Owen.”

Ylette Pearson flavours her writing by drawing from her own experiences as Public Prosecutor, Magistrate, Commissioner of the Children’s Court and admitted attorney in South Africa. She loves to travel to remote locations on the African continent with  her husband of more than twenty-five years.

She currently resides on a small vegetable and sheep farm in the Highveld of the Mpumalanga Province. When not in the veld, she can be found reading or writing in the shade of a tree with her three Jack Russels at her feet.

Share what you thought about Brent's Law and earn reward points.