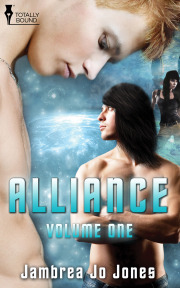 Retribution: Is love worth the cost?

Rave Anders lost everything - his job, his lover, and part of his soul. Accused of a crime he didn't commit, it's taken him years to build up a respectable intergalactic transport business. Pulled into a web of intrigue and espionage, Rave is forced to face ex-lover Kain Sims, the one man he no longer trusts.

On a mission for the Alliance, Kain must convince Rave the fate of a world rests in both their hands. Kain needs Rave to help to destroy a deadly weapon before it can be used to eradicate a planet. But that's the easy part; the hard part is making Rave believe he never wanted to leave him in the first place.

Can they save a world and reclaim the love they once shared, in a galaxy of deception?

Salvation: Can three people save each other?

Rock is a gun runner who was set in life. The only thing missing is a partner. He thinks it could be Sela, but he wants to be sure he isn't after her because she reminds him of an old crush. When Dr. Alexander d'Ado explodes onto the scene, he is a goner. Can he have his cake and eat it too?

Zander is a scientist who lives for his work. He is usually oblivious to anything else. When his ship explodes around him can he find salvation in two roughened warriors? He has no idea why someone would be after him, but the three race to find out before someone kills him.

Will the trio find love while on the run?

“What the fuck?” Rock stumbled as the ship shuddered. He looked up as Sela ran onto the bridge. “Hold on to something. A ship just exploded in our path.” He focussed on steering the Salvation out of the flames but something caught his eye. “Se, there’s an emergency pod! See if you can find their frequency and hail them,” Rock said over his shoulder, fully expecting her to jump to it. She was efficient that way. He scanned the area to see if there were any other emergency crafts, but didn’t see any other pods in the aftermath of the explosion.

“I’m supposed to be on vacation. I didn’t sign up for this,” Se grumbled.

“You didn’t have to come, you know.” It came out more harshly than he’d intended, but they were in crisis mode right now.

“Rave wouldn’t have forgiven me if I’d let you go on a gun run on your own,” she said clearly, then he thought he heard her mumble, “Stupid libido.”

“I’ve been doing this solo for a while. I don’t need my hand held by Rave and your cousin. Or you for that matter. Shit. Someone’s shooting at the pod. You get a frequency yet?” Rock threw back at her.

“Go faster,” he snapped. He wasn’t irritated with her but he needed to get to the pilot of that pod. He’d apologise later. Maybe.

“Damn it, Rock. If you don’t like my speed, do it yourself.”

“Stop arguing with me. I’d like to find out why my gun sale went south.” He didn’t understand her need to fight him at every turn. Most days it was a turn-on, but this wasn’t the time or the place for his cock to take charge.

“What are you talking about?” Se sounded peevish.

“That ship was my contact. Maybe whoever escaped in the pod has the answers I need.”

“Put more pressure on me, why don’t you?” Se said under her breath.

“Se!” He was about to lose what little sanity he had left. Didn’t she know that?

“It isn’t the fate of the world. It’s one gun sale.” Se sighed, pushing her hair out of her face.

“Those guns were going to a planet being overrun with marauders. The inhabitants need to protect themselves or they’ll be enslaved. So, yeah, the fate of someone’s world could be at stake. We need that pod.” They were going to have to do something about the sexual tension between them soon because he couldn’t take the fighting anymore. He’d rather be fucking. And now wasn’t the time. Damn.

“Stop it with the bleeding heart stuff. I’ve got them,” Se mumbled almost to herself.

“I’m the bleeding heart?” That made him smile. He’d never been known for his sympathy. Not that he wasn’t sympathetic, but money was a bigger motivator.

Se laughed. “Just talk to the pod. You’re keyed in.”

And just like that, his sanity was back. They really did work well together.

“Emergency pod, this is the captain of the Salvation. Do you need assistance?”

There was no response. Fuck. That couldn’t be good.

“Are you sure this is right?” He looked over at Se.

“Yes. They probably don’t know if we are friend or foe. They did just come off an exploding ship and who knows who’s there or what shape they’re in.” Se shrugged.

“This is the captain of the Salvation. We will shelter you. Please acknowledge,” Rock tried again, realising that Se was correct—anyone could be in there and only a handful of people had known he was meeting up with the ship.

“How do you use this thing? Hello? Hello?” A masculine voice floated over the airwaves.

Rock bit back a shout of relief. “I hear you. Do you need us to bring you in?”

On screen, another shot hit the pod. Rock couldn’t look away—it was like a bad vid streaming in 3D, and he had front row seats.

“Rock, you need to get that ship in here or it’s going to fall apart.” Se’s worry coloured her voice.

“Emergency pod, we’ve got a lock on you. Don’t touch anything. We’re bringing you in.” Rock manipulated the controls and the pod slowly inched its way towards the Salvation.

Come on, come on.

It was taking forever. Or seemed to be. He needed to upgrade his fucking equipment.

Share what you thought about Alliance: Vol 1 PRINT and earn reward points.